Norwich University President Richard W. Schneider and Commandant of Cadets Col. Michael Titus announced that Morgan Woods, of Newton, Mass., has been selected to serve as the 2018-19 Regimental Commander, the highest-ranking cadet of Norwich University’s Corps of Cadets (NUCC).

Cadet Command Sergeant Major Woods is a Psychology major and student-athlete, serving as assistant captain on the women’s rugby team. Woods also serves on the Student Athletic Advisory Committee; the Honor Committee; is president of the Psi Chi Honor Society; and a member of the Sigma Delta Pi honor society. Woods is one of seven students selected to travel to the Israel/Palestine region this spring as part of the Olmsted Foundation-supported Overseas Cultural Immersion Trip through Norwich University’s Peace and War Center.

Woods plans to commission into the Army after graduating in May 2019.

“Throughout the interview process, Morgan stood out as a no-nonsense, tough leader,” Titus said. “She’s articulate, intelligent and balanced. She has the right set of skills and, more importantly, the right attitude to lead the Corps through a challenging organizational restructuring and into our bicentennial year.”

Woods and next year’s cadet officers and NCOs will be formally promoted during a Corps of Cadets Review with Change of Command Ceremony on Friday, May 4, 2018. The ceremony will be held on the Upper Parade Ground at 3 p.m. and the public is invited to attend.

Norwich University announced the names of 78 individuals who will be memorialized on the Bicentennial Stairs as part of Norwich’s 200th anniversary.

As part of Norwich’s Bicentennial, stairs will be constructed between the southeast corner of the Upper Parade Ground and the Sullivan Museum and History Center. The 78 names selected for this monument include Norwich’s leaders, distinguished alumni and others from military and civilian careers and those who represent ‘firsts’ at the university. They serve as a tribute and daily reminder of those who personify Norwich Founder Capt. Partridge’s ideals and exemplify Norwich’s mission “to make moral, patriotic, effective and useful citizens.”

A granite stairway was constructed at the northeast corner of the Upper Parade Ground in celebration of Norwich’s centennial in 1919. Each of the 40 granite steps bears the name of an individual considered important in Norwich’s first 100 years.

The groundbreaking ceremony for the bicentennial stairs will take place at 2 p.m. Thursday, May 31, at the Sullivan Museum and History Center. The project will be completed and dedicated in September 2019, as part of Homecoming Weekend festivities.

Among the Bicentennial Stairs honorees are: Tracey Poirier, NU 1996, Norwich’s first Rhodes scholar; Richard W. Schneider, Norwich’s current and longest-serving president; and members of longtime Vermont families such as Charles Dole, NU 1869, who served as acting president and a trustee; William Mayo, a Northfield physician who created a scholarship that boosted enrollment after the Civil War; and Paul Carrara, NU 1959, former President of J.P. Carrara & Sons and a trustee; along with many others. View the entire list of Bicentennial Stairs honorees.

The Bicentennial Stairs are part of Norwich’s $100 million Forging the Future campaign. The largest fundraising effort in the university’s history, the focus of the campaign is on creating a state-of-the-art learning environment, strengthening academic programing and growing scholarship endowments.

French Chef Jean-Louis Guérin hosted Beginners’ French II students at his La Brioche Café in Montpelier. The chef concocted them a special French breakfast of fresh croissants, baguettes, and œufs Bénédicte, which the students enjoyed while the chef regaled them with stories of the rich culinary tradition of France. Students brought prepared questions to ask the chef, and in the course of conversation learned about his favorite recipes, his business approach, and his studies in France. This event was an experiential learning component of the course chapter on “Food, Quantities and Recipes,” designed to help students develop fluency outside the classroom.

In the Oromo Language

February 22, 2018 – Norwich University’s Peace and War Center presented “The Traditional Citizen Soldier: The Oromo Gadaa System in Ethiopia,” by prominent Oromo novelist, scholar, and filmmaker Teferi Niggusie Tafa in the Kreitzberg Library South Instruction Room. In addition to publishing the first (and so far only) scholarly analysis of Oromo-language novels, he has also published several of his own novels in the Oromo language, including the award-winning Jaalala Dhuga, by Macmillan in London. His research interests ranges from nationalism, literature, and film studies.

What I Wear to Class: Chicago Sophomore Charles Grunert '20 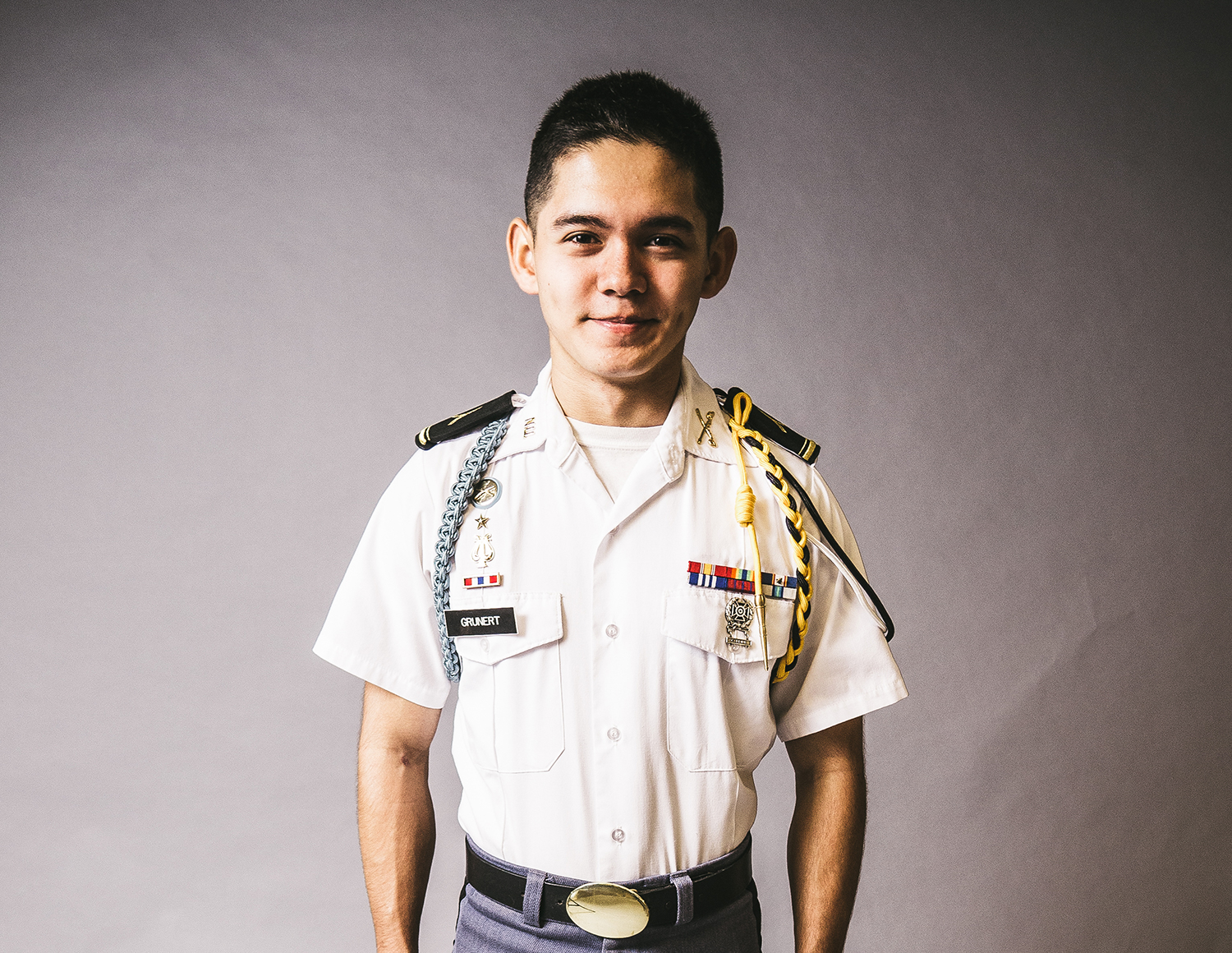 The cybersecurity major and jazz trumpeter shares the backstory on his U.S. Army braid and regimental band lyre.

So what uniform are you wearing?
This is the Norwich University Corps of Cadets Summer Class B uniform.

What does the black and gold braid on your shoulder signal?
I just got my U.S. Army ROTC scholarship activated. That was from swearing in. I did that at the quarry on Payne Mountain while repelling with Capt. Jones, my professor in military science. We repelled a cliff face 40-50 feet and went down it halfway. Hand raised. It was awesome. It was the first time anyone's ever done that.

How about the blue braid?
The blue braid is the infantry cord. That's what I got from enlisting the prior summer and going through infantry school. It was 13 weeks total. I joined the Vermont National Guard, and I just went through the whole process (before) I knew I was going to get contracted (as an officer) the next year.

Can you talk a little bit about Mountain Cold Weather Company?
Definitely one of my favorite things about this school. It's a unique (student) club and a unique experience. We base all of what we learn and teach off the actual (U.S. Army) Mountain Warfare School. We're self-regulated. We have to enforce our own professionalism, which is why it's so amazing. I'm a training sergeant (helping teach first year members how to ski, ice climb, etc.) I feel really blessed to train and get that leadership experience as a sophomore.

You have a pin that looks like an instrument. What's that?
The band lyre. That's something that you earn in the (Norwich University Corps of Cadets Regimental) Band. You go through your own hardships, training, and special events. If you can't meet certain requirements, you're kicked out. Honestly, it's worth it in the end, because you get a whole new set of friends and you're like family.

What instrument do you play?
The trumpet. I've been playing since third grade. I was really turned off by jazz (initially), but now I love going to see live jazz. In fact, in the future, apart from being an officer, I really just want to play jazz at night bars. So that's like a long-term goal of mine. It's kind of on the side. Like a secret hobby.

Any parting thoughts?
I wish I saw how I looked. I would have tucked my shirt a little tighter.