Brian Glenney is your typical skateboarding, graffiti-spraying, private military college assistant professor of philosophy with a rock star resume and the punk playlist to match it. A graduate of St. Andrews and USC, Glenney specializes in social and sensory perception, exploring philosophical theories about what it is to see, hear, and touch in the world around us. He has spoken about his work at Harvard, Princeton, Oxford, and the University of Tokyo. New York’s Metropolitan Museum of Modern Art has also come calling, showcasing his collaborative street art/icon design reimaging of the wheelchair access symbol.

Glenney’s wide-ranging research often relates to perception and labels of disability vs. diversity, and more recently subversion in sport—that notion that genius rule-benders, if not breakers, drive innovation. To wit, Socrates, Charles Dickens, and the guy who invented the cross-over dribble. So what does that have to do with labs? Well, more than you might think. Glenney recently collaborated with colleagues at UVM to survey local skateboarders on their attitudes and behaviors around helmet use. The National Institutes of Health, which funded the research via a Vermont Genetics Network grant, is keen to understand the behaviors and risks of extreme sports.

Glenney sees the project as a potential first step for a larger, lab-based study. At a prior post, Glenney founded a philosophy and psychology lab, where students helped create the Kromophone, prototype goggles, and now an app that turns colors into sounds, upending how we experience the world. Such undergraduate projects demonstrate “that philosophy is reliably practical,” Glenney says. “If anything is awesome about Norwich, it’s that the students demand some kind of practical upshot to what they’re learning.” A lab is “a perfect place to show philosophy actually engages the world that you touch and see. It’s not just theoretical.”

Expert on:
1. The perceptual theory of 18th-century Scottish philosopher Adam Smith.
2. Molyneux’s Question: Could a blind person who knows a cube and sphere by touch identify them by sight if it were restored?
3. Socrates’ hobbies if alive today: “I think he would skate and do graffiti.” *

* OK, make that an educated guess.

Environmental chemist Seth Frisbie is a world expert on detecting toxic metals in drinking water and the math behind their associated health risk. If the World Health Organization makes a rounding error, he catches it. Such tiny details matter. A mere 10 parts per billion of arsenic in drinking water, the current U.S. standard for example, leads to an extra 1 cancer death out of 400 people. “Arsenic is so toxic, so carcinogenic that it cannot be measured to safe levels” in routine testing laboratories, Frisbie says. Arsenic isn’t our only worry. Trace amounts of far too many other toxic metals also act as powerful carcinogens or neurotoxins. Most of our drinking water today comes from the ground and therein lies the problem. “Most elements of the periodic table are in the Earth’s crust” and thus our water, he says. “We’re drinking filtered mud.”

1. France: On independent study leave this year, Frisbie and his wife and research partner, Erika Mitchell, are working with Richard Ortega at the Nuclear Research Center at the University of Bordeaux. Using PIXE, a state-of-the art particle accelerator, they are investigating how manganese might affect the neurology of infants, children, and the elderly, and possible links to Parkinson’s Disease and some learning disabilities.

3. Norwich: Frisbie is nearing completion on a groundbreaking device to detect arsenic in drinking water, one that is a thousand times more sensitive than is currently possible in routine testing laboratories. Senior biochemistry major Greg Wilkins has worked to calibrate the instrument.

A place for focused effort, experimentation, exploration and discovery. If anything in the Humanities fits the definition of a lab, it’s theatre. “You can take risks and try new things,” says Assistant Professor of Theatre Jeffry Casey. In November, Casey directed actors in the Norwich student theatre troupe the Pegasus Players in a production of two short Harold Pinter plays, “Party Time” and “New World Order.” The works explore authoritarianism and torture while grappling with the theme of power. Casey, who joined the Norwich faculty in July, says producing theatre at a military college like Norwich is an opportunity to expose future military and civilian leaders to ideas through art. “Nothing is more important than [how] they think about power and what it means [to] have power and what it means to be complicit in injustice or justice.”

Casey, who also teaches classes on public speaking, writing, and literature, says he wants to push theatre at Norwich into other arenas. He has already visited ESL classes and says theatre students could support other campus programs in countless ways. “We live in a world of non-scarcity in some ways with so many products, particularly culture,” he says. “But theatre is a scarce resource, and that makes it more valuable.”

Related Story: Jeff Casey on Why I Teach

Just four years old, the gene-editing tool known as CRISPR is already one of the most groundbreaking, if not powerful tools in modern science. Working like a pair of bargain-priced, $70 molecular scissors, the DNA enzyme carries machinery and instructions to snip strands of DNA with exacting precision. Researchers can now target specific genes and swap in new genetic material nearly at will. Whether CRISPR (or Clustered Regularly Interspaced Short Palindromic Repeats) opens a golden age or a Pandora’s box of genetic tinkering remains to be seen.

But for Norwich biochemistry professor Ethan Guth, CRISPR is in the end “just another tool.” More exciting are the research questions he can now explore in a lab outfitted with little more than an ice bucket and a few hot plates. With a grant from the Vermont Genetics Network, Guth has worked over the past year to jumpstart CRISPR research at Norwich. He aims to grow yeast spliced with Godzilla-like genes from Deinococcus radiodurans, an unusual strain of bacteria highly resistant to oxidative damage and radiation.

The associate professor of chemistry says he hopes to understand how those genes function to give an organism the ability to resist the corrosive forces of oxidation (think rust at the cellular and molecular level). While his research is basic science, he says it could theoretically open intriguing future applications, given the role that oxidation plays in the etiology of cancer, heart disease, neurodegenerative diseases, and many other human diseases. “He’s a pioneer,” says Karen Hinkle, a researcher, biology professor, and NU Office of Academic Research associate vice president. Norwich now has a CRISPR expert, one who has already involved students in cutting-edge work and will be a go-to resource for other faculty researchers, she says. “I think it’s the fundamental dream of a lot of young nerdy science boys,” Guth says. “To be able to build something new.” 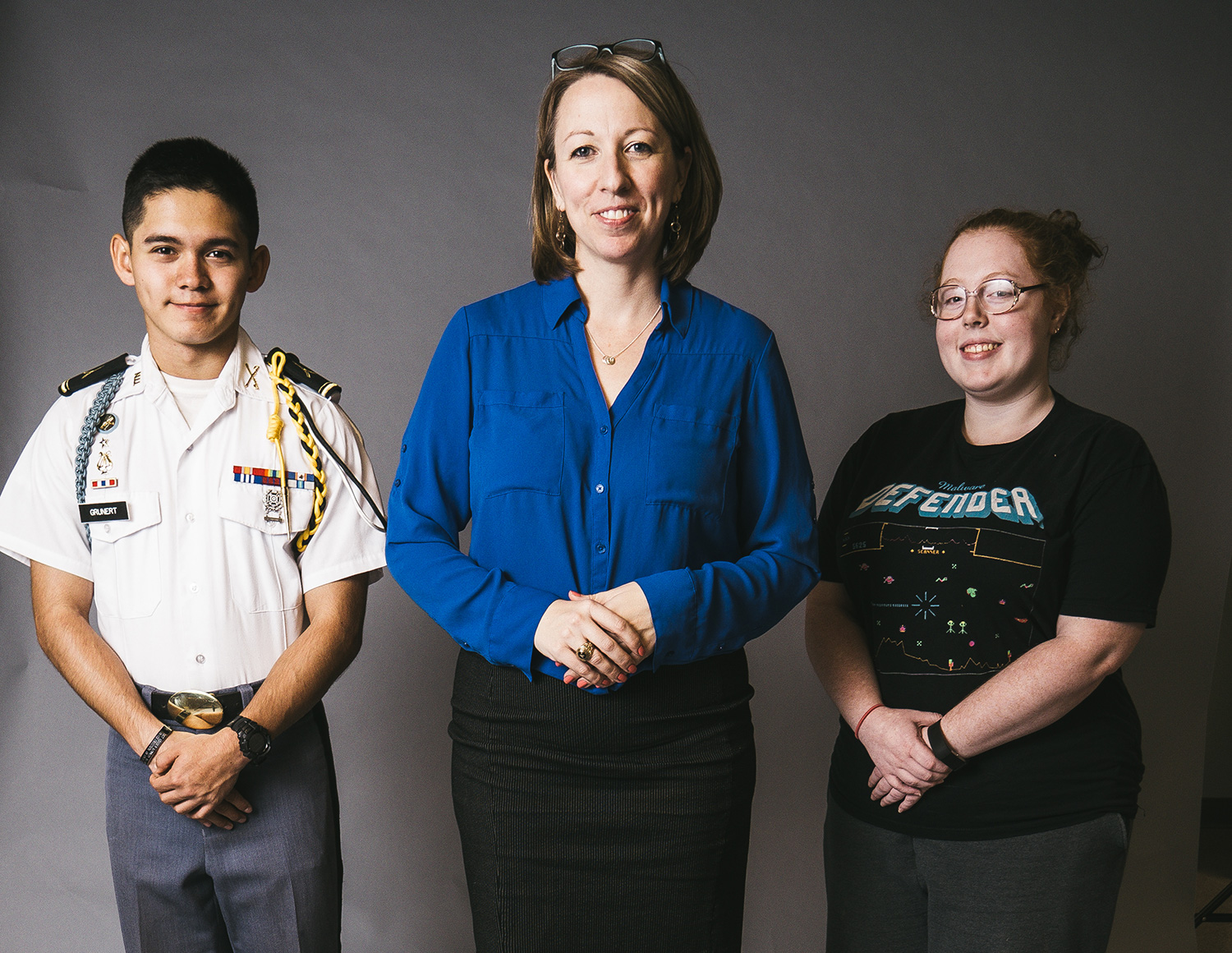 However, Poirier is the first to admit that she’s no Patton. “I’ve got this giant smile, and I laugh all the time.” And that’s okay with her. Such insights are the kind she invites her leadership students to make. “We focus a lot on knowing yourself, understanding what makes you tick.” That includes knowing what brings out your best and your worst and how you communicate and work in a group. Poirier says the program is not about teaching leadership, per se. Rather, “it’s about teaching components so that students can find their own leadership.” By knowing more about themselves, students can begin to understand the people around them, learn how to put together the best team, and bring out their best.

Poirier says she was often told as a young officer to be a good leader. But rarely did the conversation move beyond that. “In my early career, not a lot of people sat me down and said, Let’s work on little bits. Let’s just focus on this one piece—like how do you communicate? How do you best motivate others?” At Norwich, Poirier has changed that.