What I Wear to Class: Brandon Sichak ’21 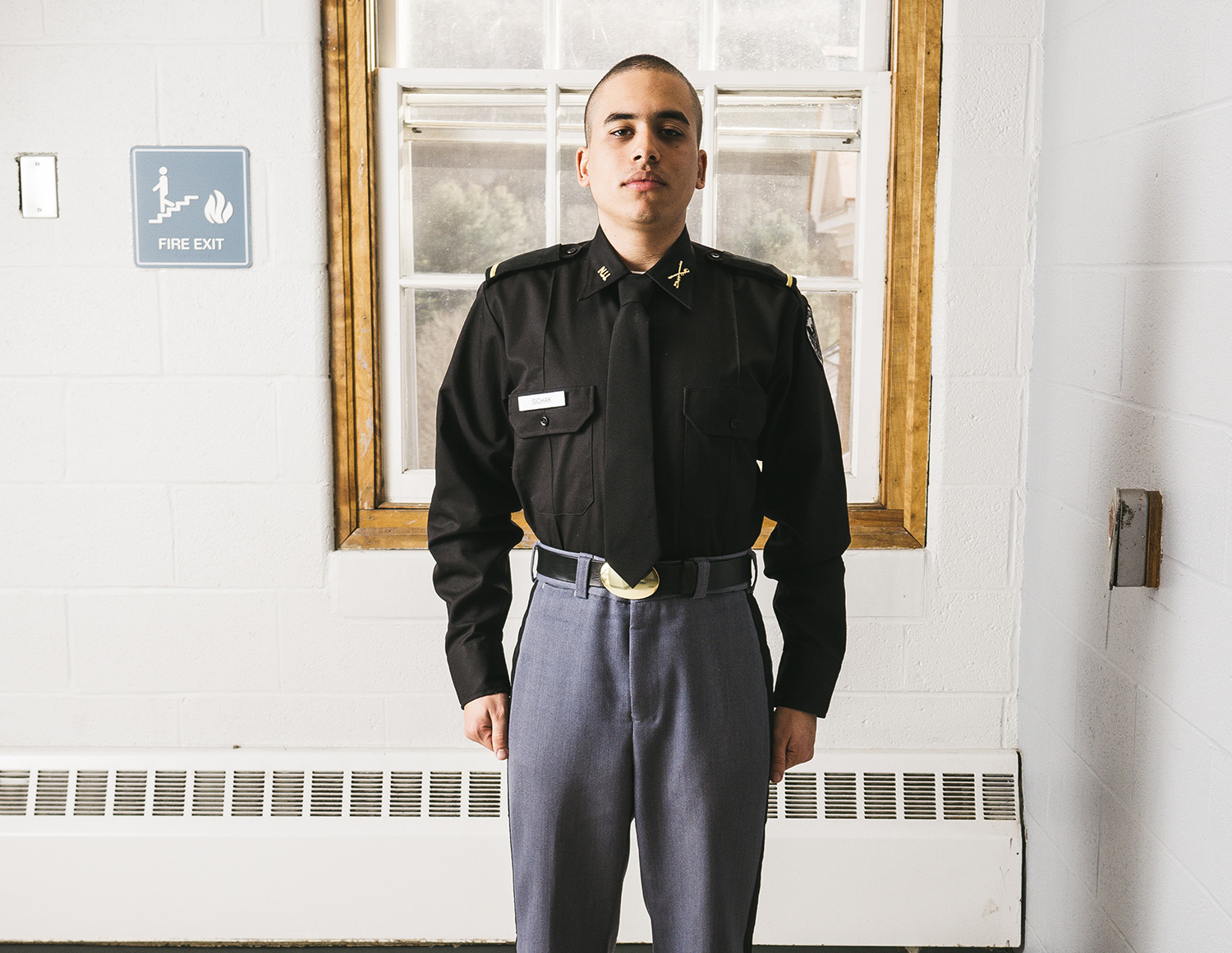 The first-year Studies in War & Peace major from Miami, Florida, explains why he needs a new belt.

Tell us about the uniform you're wearing today.
This is the Corps of Cadets winter class B uniform. It’s black long-sleeve vs. the summer, where it’s white short-sleeve. With the winter, your collar goes up, and you wear a tie.

When do you get recognized as a cadet?
I don’t know. That’s a surprise for me.

Did you say your pants no longer fit?
My trousers are a little baggy, because I had lost some weight. I came here weighing 160. But I (now) weigh 140. I lost 20 pounds. I had to get all my uniforms resized. Like now I have to go back to the Uniform Store and get myself a new belt.

How did you lose 20 pounds in three months?
A lot of PT and a diet change.

That’s really impressive.
Back at home, I sat around all day because I was in a not too ghetto but pretty ghetto place. There wasn’t a whole lot to do. So I stayed in at home all day. When I got here, I was a lot more active. I didn’t eat as much. I made healthier food (choices). Stuff like that.

What kind of PT are you doing?
At first, I used to do PT for the Corps and the Army. Right now, I only do PT for the Army and tennis and sometimes I go to the gym. Tennis right now is not really an official team. We’re more of a club. But the bond is still pretty tight.

How’d you pick your major?
I’ve always liked history. It’s always been my favorite class in high school. Military history with a mixture of political science—when I first saw that for degrees and majors, I knew immediately, yeah, that’s definitely what I want to do.

How about French?
At some point in my life, I’d like to go to central Africa. Also, half my family speaks French. My mom was born in Port au Prince (Haiti). She came over here in the 80s.

The search for new heights

Instead, fueled by his insatiable curiosity, supreme intellect, and the singular drive of an Air Force Top Gun, he has rocketed to cutting-edge research’s forefront: investigating how to improve the safety and efficacy of pilots operating under high-performance flight conditions.

“Every square inch of a military aircraft is instrumented, with instant access to the data,” explains Brian Bradke, assistant professor of mechanical engineering. “Yet we have no way to objectively monitor its weakest link: the person flying the plane. We rely on pilots themselves to recognize the signs of potentially catastrophic conditions such as hypoxia — but by the time they do, it’s often too late.”

Leveraging the resonances between mechanical and biomedical engineering—his primary areas of expertise —Bradke ultimately hopes not only to monitor the real-time effects of acceleration and altitude on pilot physiology, but also to proactively counter them.

“Once a pilot is incapacitated, the outcome is always the same,” he says. “This research can preserve a multimillion-dollar asset. More importantly, it will save lives.”

The launching pad for Bradke’s inquiry rests at NASA —and the trajectory of his preparation spans more than a decade’s worth of experiences that have uniquely prepared him to conduct it.

During a summer internship following his first year of college — “I decided it would be better to be an engineer with a music hobby, than a musician with an engineering hobby,” he says with a laugh—Bradke examined the impacts of space flight on astronauts’ health, in part via remote instrumentation. There, at Kennedy Space Center, he realized two things: he was utterly fascinated by the role engineering could play in medicine. And, he wanted to fly in space.

Within four years, Bradke had earned a both a bachelor’s degree in biomedical engineering from Rensselaer Polytechnic Institute (RPI) and a master’s in mechanical engineering from Stanford University, with a specific focus on the effect of flight on body mechanics. Within seven years, he had commissioned into the U.S. Air Force, graduated at the top of his officer candidate class, and earned his pilot certification. And, by the time he completed his doctorate in biomedical engineering from RPI in 2014, he was a decorated combat pilot, having flown sorties in operations Iraqi Freedom and Enduring Freedom.

Although he narrowly missed qualifying for astronaut school (he finished in the top one-half of one percent of 18,000 candidates), Bradke’s landing at Norwich has been soft.

“Norwich is a perfect fit for me: I can pursue my scholarship in a military environment, and apply my knowledge toward solving problems I’m personally passionate about,” he says. “And I love being in the classroom.”

Already, Bradke has invented and prototyped a standalone hypoxia warning system for pilots and aircrew, and has developed a revolutionary new musculoskeletal countermeasures suit that may help astronauts maintain healthy bone and muscle mass while on extended missions.

The implications of this work, Bradke believes, will soon extend into commercial space travel. For this reason, he has proposed the Norwich University Airborne Research Center: an interdisciplinary development, test, and evaluation center focused on the discovery and implementation of new technologies to enhance the safety of civil and military air and space flight.

“The challenges we face, as humans seek to go ever higher and faster, are largely physiological in nature,” Bradke says. “My work blends theoretical, computational, and applied aerospace and biomedical technology to mitigate those challenges.”

If funded, the center would be the first of its kind in the country.

Dr. Mark Boonshoft, assistant professor in the History and Political Science Department,” received the Board of Fellows Faculty Development Prize for the 2018-19 academic year for his project, "The Rise and Fall of ‘Monarchical’ Education and the Making of the American Republic.” The award will support his work to finish the writing and revision of a book manuscript that analyzes a transformation in American education during the 1810s-1820s, traces the emergence of republican self-government in America, and, in turn, explains why future generations of Americans would demand access to schooling in order to lay claim to the rights of citizens.

Norwich University Professor of Earth and Environmental Science Laurie Grigg has earned a $132,000 grant from the National Science Foundation (NSF) to support her research on insights into the impacts of climate change on Vermont lakes.

The NSF recently announced  that Grigg is one of 30 faculty research fellowships awarded through NSF’s Established Program to Stimulate Competitive Research (EPSCoR) nationwide.

Grigg (pictured with students) will be analyzing sediment cores from the bottom of a central Vermont lake in order to reconstruct how the aquatic ecosystems have responded to climatic changes during the last 10,000 years. Changes in the ecosystem will in turn be used to infer changes in water quality. The long-term perspective provided by this study will inform our understanding of how lakes are and will respond to climatic changes.

“Lake sediment, which accumulates in layers at the bottom of lakes through time, provides an opportunity to investigate the dynamics between past climate change and aquatic plant growth over longer time-scales and to gain insights into how aquatic ecosystems will be impacted in the future by climate change,” Grigg said.

Grigg’s research aligns with the mission of Norwich University’s Center for Global Resilience and Security  to advance interrelationships between human resilience and sense of security in the face of global challenges, and will contribute more broadly to the growing body of knowledge on the projected impacts of climate change to our valuable freshwater resources.

In November 2017, the Center for Global Resilience and Security (CGRS) at Norwich University was awarded a $2,500 High Meadows Fund grant (supporting organization of the Vermont Community Foundation), to support the development of the mission, composition, role and responsibilities of the Resilient Vermont Network (RVT), housed at CGRS since 2017.

The grant allows CGRS to engage both the Norwich community of students, faculty, staff, and alums, as well as the interested stakeholders from across the state of Vermont as we seek to: 1. Identify critical ongoing functions and activities of RVT; 2. Solidify a structure and leadership plan for RVT; 3. Capitalize on new opportunities and priorities such as clean water, CGRS’s new Academic Resilience Collaborative (ARC), and the VT State Hazard Mitigation Plan (SHMP).