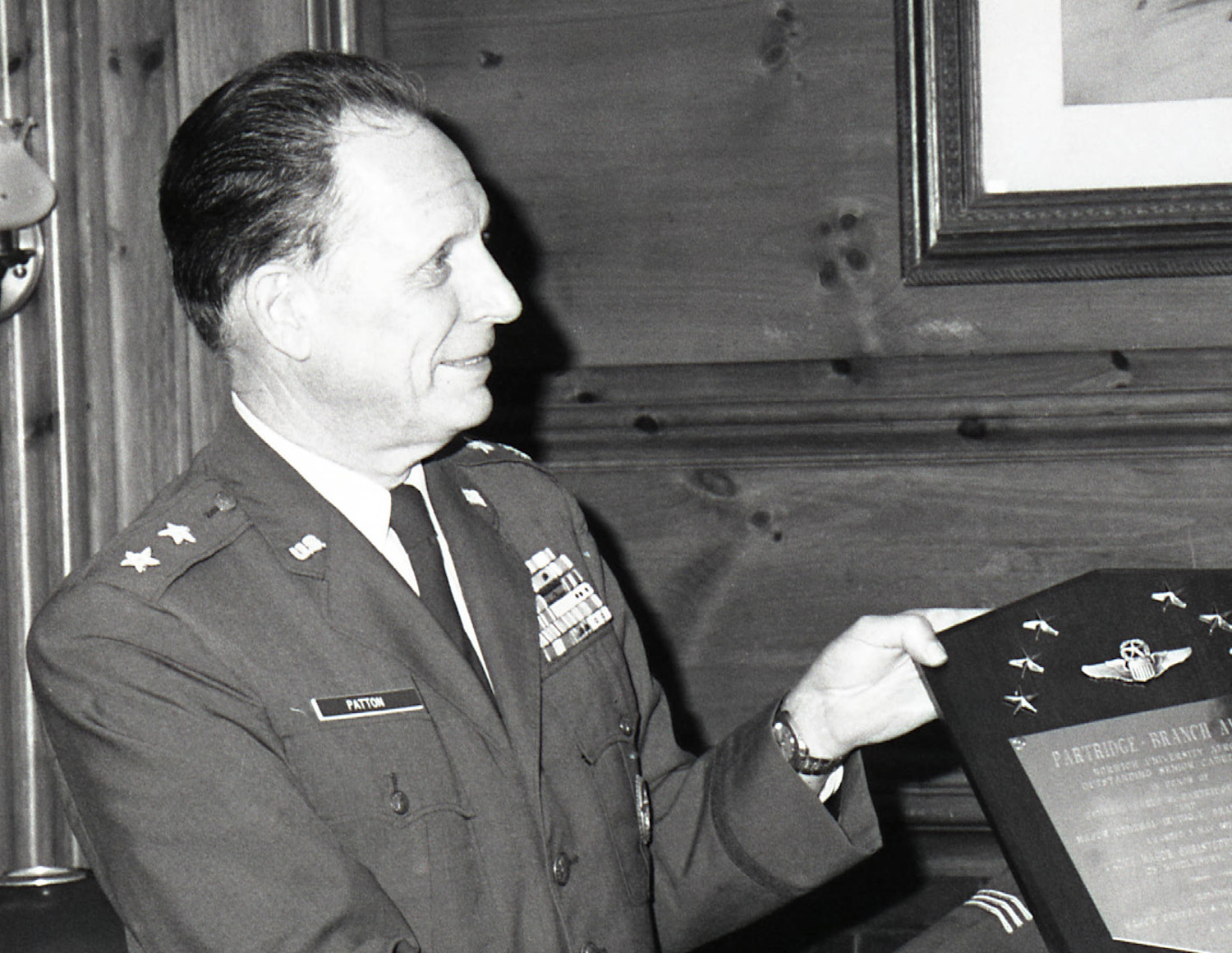 MAJOR GENERAL JOHN S. PATTON served as military adviser to the chairman and executive officer of the Reserve Forces Policy Board, Office of the Secretary of Defense since January 1969. The Reserve Forces Policy Board is the principal policy advisory group to the secretary of defense on matters pertaining to the Reserve Components of the Armed Forces. The board is assisted by an advisory panel on ROTC affairs.

His distinguished career in the service of the U.S. government, as a military reserve officer and as a civilian executive in the Department of Defense and the National Aeronautics and Space Administration, began when he enlisted in the U.S. Naval Reserve in August 1941.

He entered active duty in January 1942 and was commissioned as ensign in May 1942. He completed Bomb Disposal School then served on the USS Enterprise in South Pacific combat duty from October 1942 to May 1943. He subsequently was a bomb damage assessment and targeting liaison officer with the British Ministry of Home Security and the U.S. Eighth Air Force in England. He next was assigned to the Joint Target Group in Washington, D.C., supporting the XXI Bomber Command in the strategic air offensive against Japan. He was a lieutenant commander when relieved from active duty in September 1946.

“The Patton Center is well named. My experience with the Pattons through intersections involving the Board of Fellows and Board of Trustees was always very positive. Both were modest, helpful, congenial, articulate, and highly intelligent advocates of the University. Their interest in the University involved a deep and probing attention to the mission and history of the institution that was uncommon, if not rare.” — Emeritus Dana Professor of History Dr. Gary T. Lord

In 1949 General Patton transferred from the Naval Reserve to the Air Force Reserve in the grade of major. He was attached to Headquarters Strategic Air Command for 11 years as an intelligence staff officer. In 1961 he was transferred to Headquarters U.S. Air Force Security Service as assistant to the commander and visited many oversea units. In April 1968 he became assistant to the director of doctrine, concepts and objectives, Deputy Chief of Staff for Plans and Operations, Headquarters U.S. Air Force.

After his release from active duty in 1946, he joined Headquarters U.S. Air Force as a civilian weapons and intelligence analyst with the Air Targets Division. In 1950 he became a charter member of the Special Study Group and was assigned to it and its successor organization, the Special Advisory Group, until 1967. While with these groups, he was detached for full-time special assignments, including the Advanced Research Projects Agency, Department of Defense, 1958-1959, where as deputy director for plans and policy, he played a key role in the establishment of the national space tracking network; participation in the 1958 Department of Defense reorganization panel; and 1963 service with Project Forecast, the Air Force’s 10-year planning effort for the development of advanced weapons systems. From 1964 until 1967, he was a full-time consultant to the assistant chief of staff, studies and analysis, Headquarters U.S. Air Force, concentrating on major cost effectiveness problems and research.

In September 1967, he accepted an appointment as special adviser to the assistant administrator for policy, National Aeronautics and Space Administration. He was placed on military furlough by NASA when he was recalled to extended active duty.

He was actively engaged in a series of related educational, civil and public relations endeavors. He appeared as a guest speaker on a number of occasions and took an active interest in AFROTC affairs. In 1968 he was made the first honorary major in the history of the Staunton Military Academy Corps. From 1966 to 1968, he was a professional lecturer in the Department of Politics at Catholic University of America, teaching at the graduate level.

“The Pattons are two of the smartest people I have ever met. Mary Frances always carried herself with such grace and John was always a gentleman who was constantly interested in what he could do to help Norwich, even after he had retired from the board. I frequently received calls and letters from him with some fantastic ideas. Together, they were an incredibly articulate and sophisticated couple who bled Maroon and Gold. They both took a profound interest in the Peace and War Center, and made provisions for the generous support of it in their estate.” — President Emeritus Richard Schneider

His military decorations and awards include the Legion of Merit, Army Commendation Medal, and Navy Presidential Unit Citation with star. He received the Department of Defense Distinguished Civilian Service Award in 1959, the Department of the Air Force Exceptional Civilian Award in 1968, and the National Civil Service League Merit Citation in 1959. In 1968 he was recommended by the Department of the Air Force for the Rockefeller Public Service Award, and NASA awarded him its Certificate of Appreciation in 1969 for his work in space applications and interagency affairs.

General Patton was a member of several professional associations, including the Operations Research Society of America, American Society of Oceanography, Middle East Institute, Academy of Political Science, American Historical Association, Air Force Association, Naval Reserve Association, Naval Enlisted Reserve Association, Veterans of Foreign Wars, and Reserve Officers Association. In 1969 he was elected to the Board of Trustees of the Air Force Historical Foundation. He also was a member of the Goddard Historical Essay Committee of the National Space Club. He belonged to the Phi Kappa Phi and Beta Gamma Sigma honor societies, the Honor Society of American University, and Pi Sigma Alpha, the national political science fraternity. He was promoted to the grade of major general effective May 19, 1967, with a temporary date of rank October 17, 1964.

“[MG Patton] was an excellent member of the board. People like him were essential to the board, because he was not an alum. He always had something valuable to add to our conversations. You always need a few naysayers and John was one of them. I would like to say that the world has lost a good man.” — Emeritus Secretary of the Norwich University Board of Trustees Gerry Painter

Major General Patton accepted membership on the Norwich Board of Trustees in October 1979 and served until 1996. It is believed that his involvement with Norwich University began when he was referred to serve on the board by another sitting board member, though there is ambiguity around who invited him. General Patton was a member of the Board of Fellows prior to becoming a Trustee and had chaired the Public Relations Committee. While on the Board of Fellows, he received the Outstanding Service Medallion for his contributions to Norwich University in November 1983. He also was added to the Capital Campaign for the future in that same year. He was a lifetime member of the Norwich University Partridge Society. Patton was heavily involved in arranging professional internships for Norwich University cadets and graduates in the Washington, D.C. area. The Pattons were members of the Partridge Society as Two-Star Generals, 1819 Circle Members and Garrison Associate Founders with over 30 years of consecutive giving to Norwich University. Mary Frances was highly involved with the spouses of the board who would often plan get-togethers for the Trustees when they were meeting in Northfield.

General Patton was honorably bestowed a doctorate in Military Science from Norwich University when he retired in 1996. There is now an endowed Maj Gen & Mrs. John S. Patton Studies in War and Peace Scholarship, which was established in 2006 by Major General John S. Patton, USAF (Ret.) and Professor Mary Frances M. Patton. This scholarship is to be awarded to a student majoring in Studies in War and Peace.