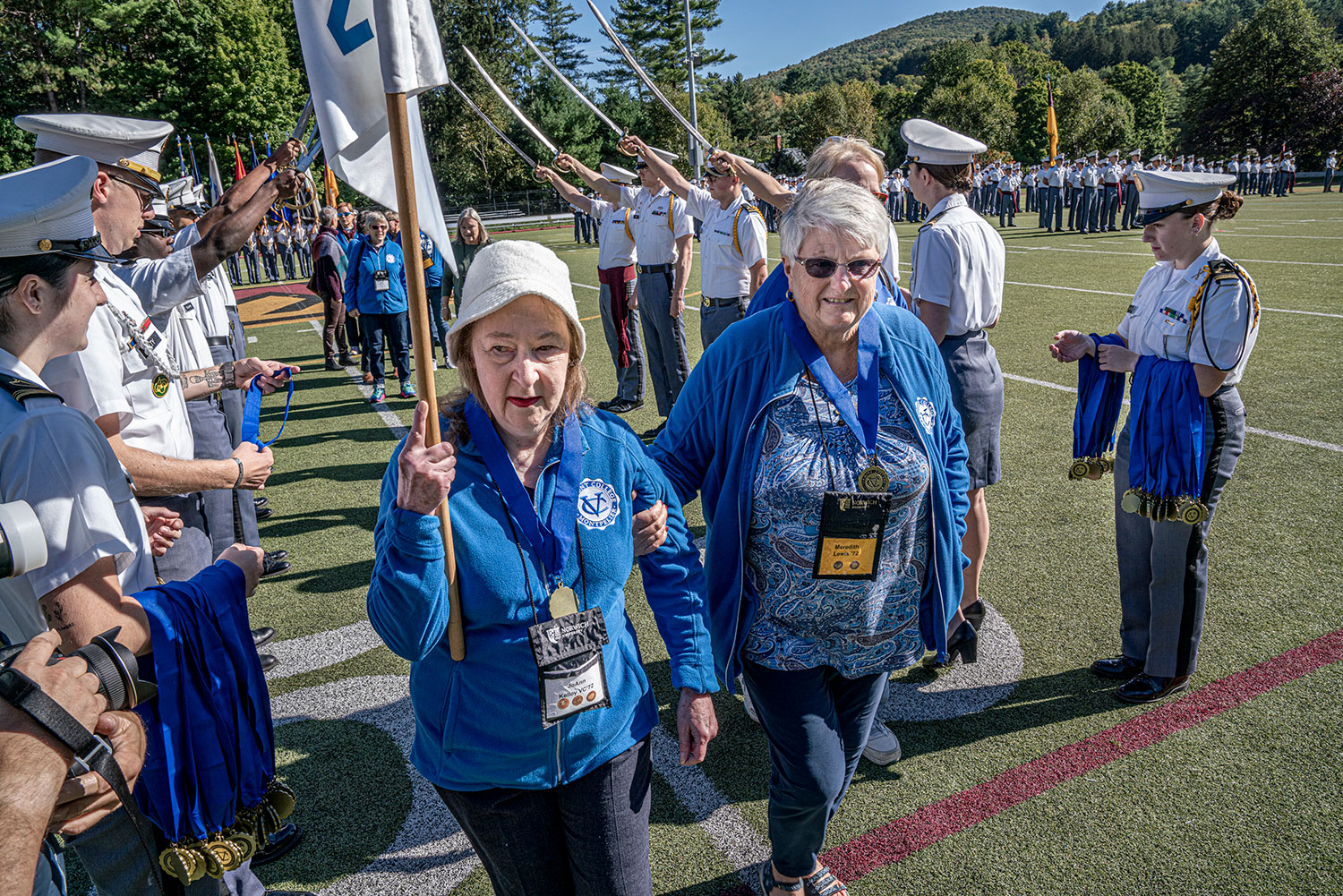 Marking a 50-year reunion and anniversary

“We’ve been here three times in the past 50 years, and it’s exactly the same,” says Steve Glines from his perch on the steps of College Hall, the iconic administrative home of Vermont College, since renamed the Vermont College of Fine Arts in Montpelier. “She wants to see it every time.” Steve’s wife, Susan, is a 1972 graduate of the formerly all-women’s college, the same year that it was acquired by Norwich. The couple drove from their home in Littleton, Mass., for Homecoming to mark her 50-Year Class Reunion with fellow VC graduates. Many of the 40 or so expected attendees are here this morning for a tour of their former campus, dressed in matching Vermont College blue fleece jackets.

“Are you still nursing?” a classmate asks Susan.

“Yes, still milking it,” she replies with a smile.

Today’s get-together was organized in part by Gail Lull VC’72, an energetic early childhood educator from Newburyport, Mass. As the old friends assemble, Susan Glines reflects on how her college experience impacted her life. “It changed the whole trajectory,” she says, not¬ing that at the time, Vermont College was home to one of the top associate degree programs in the country. She recalls its small student body, intimate faculty-to-student ratio, and social mixers with Norwich, Dartmouth, and other all-men’s colleges with affection. “It was a very unique experience.”

Amid the amiably chatting crowd are Betsey (Symmes) Harms VC’75 and her husband, Paul ’75, who drove from Elizabethtown, Ky., in their RV, as they do nearly every year to attend Homecoming at Norwich. The couple met as undergraduates. Paul gallantly offered Betsey a ride home one evening after patronizing a Montpelier bar called the Industrial Revolution, which was located on the second floor of an old brick building. “We’re disappointed we can’t find the I.R.,” Betsey says now.

The tour group pops inside College Hall, climbing the stairs to its beautifully restored upper-floor chapel. Don Lewis ’72, who has accompanied his wife, Meredith VC’72, from their home in Maine exclaims, “Wow,” craning his neck to look up at the stenciled ceiling. “It kind of gives you chills, doesn’t it?”