Lives: A Pair of Titans 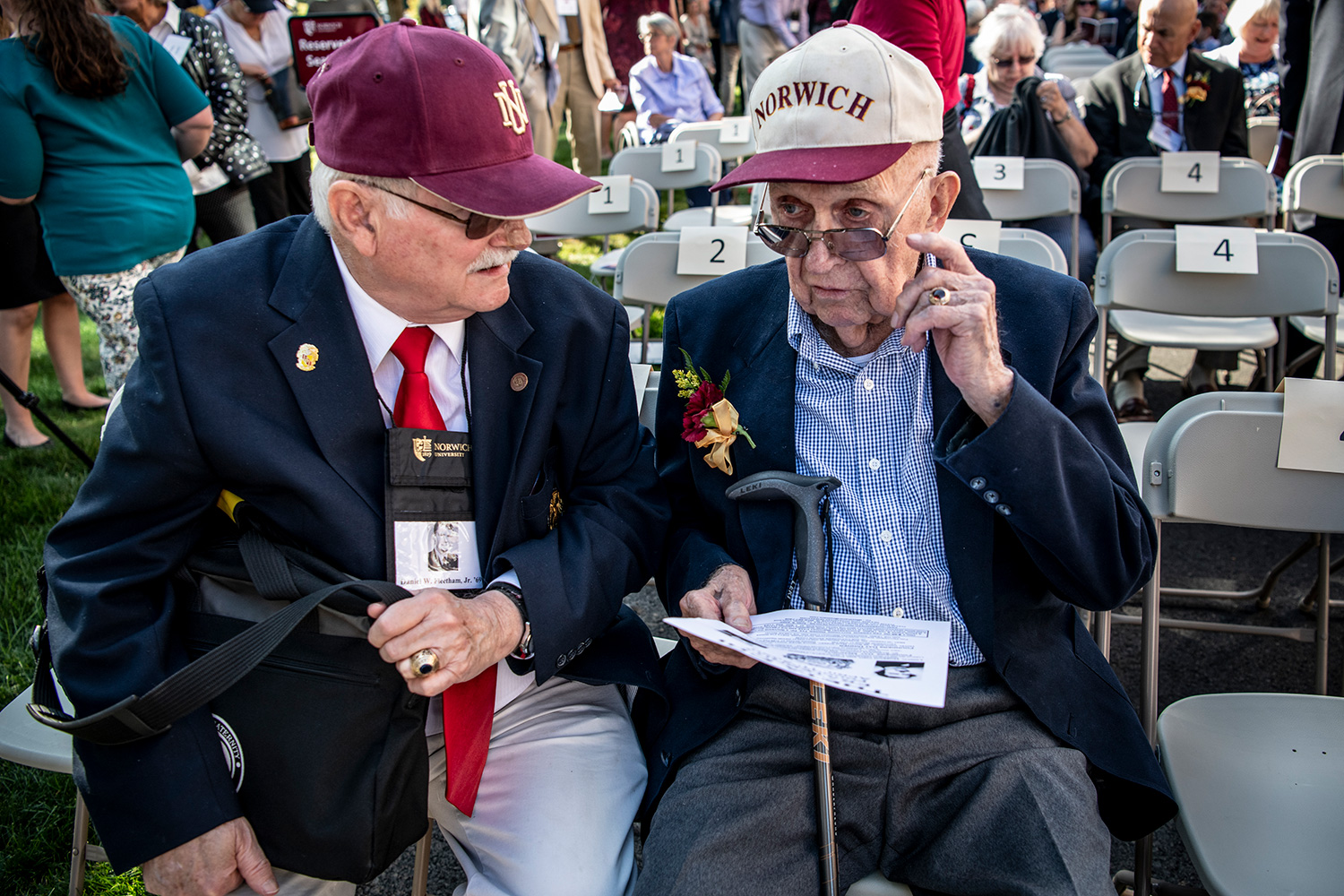 Both were formidable friends of the university, generous benefactors, and titans of the Board of Trustees. Marsilius served on the board for 25 years from 1962–1987 and as chair from 1970–1987. Weintz brilliantly led the board’s investment committee as chair for nearly 40 years from 1983–2020.

“I cannot share with you enough how much both of these men impacted our university and left it a better place than they found it,” David Whaley ’76, the university’s former executive vice president and current corporate secretary, wrote in an email conveying news of their passing.

“Both Phil and Fred were giants in everything they were involved in,” was the immediate response of Gen. Alfred M. Gray, former Commandant of the Marine Corps and a Norwich trustee for 16 years. “It was a privilege to know them and have the opportunity to watch them.”

Marsilius, who was 100, and Weintz, 96, were among the last of the university’s WWII veterans. Marsilius’s graduation in 1943 — he was both valedictorian and class president, the latter three years running—was moved up three months so the cadets could enter the war. Weintz interrupted his studies following his freshman year to enlist in the U.S. Army Air Corps in 1944, serving as a radio operator on B-26 bombers.

Marsilius went on to complete his master’s degree at MIT, then joined his brother in running the family business, a precision machine-tool manufacturer based in Bridgeport, Conn., and beyond. Throughout, he maintained close ties to his undergraduate alma mater, an active sense of duty, and a “fierce” loyalty to Norwich.

In his 25 years serving on the NU Board of Trustees, 17 as chair, Marsilius guided Norwich through major changes, including the admittance of women into the Corps of Cadets, the merger with Vermont College, and the purchase from Goddard College of its low-residency, adult programs. He was key in the hiring of two Norwich presidents: Loring Hart and Maj. Gen. W. Russell Todd, USA (Ret).

“He helped to stabilize the university’s governance and brought order to the board,” Schneider recalled. “His skills at building consensus and leading a board through tough times were unparalleled.”

Weintz completed his bachelor’s degree at Stanford and earned an MBA from Harvard Business School. He soon joined the investment giant Goldman Sachs, where he remained for the entirety of a highly successful career.

Weintz served on a variety of boards, which reflected his life of wildly varied interests—from the Sierra Club to the National Lighthouse Museum to work on population and international health at Harvard University’s School of Public Health. But what he accomplished as chair of the Norwich Board of Trustees’ investment committee, growing the university’s endowment from anemic levels in 1983 to its current robust health of some $260 million, and educating everyone about its importance and the need to preserve it, was one of the sources of his greatest satisfaction.

“He felt that chairing the Norwich investment committee was one of his biggest success stories,” Weintz’s son Karl said.

Even in the last weeks of his life, Karl added, his father recalled with fondness “fiscal year 2005” when Norwich’s investment performance outranked every other school. “Beating Harvard, Yale, Princeton, Stanford—everybody!”

“He was brilliant, absolutely brilliant,” Schneider said. Weintz’s dedication was especially remarkable, Schneider added, because he’d only spent one year on the Hill. Asked what inspired that devotion, Schneider said, “Because of our values.”

The NU President Emeritus said both men “lived our Norwich University values their whole lives—of serving America, serving family, and serving the community,” adding that both possessed the sine qua non Norwich traits of leadership and service. “Fred and Phil were great role models for us all.”

In an interview with the Sullivan Muse¬um and History Center, recorded in 2015 when he was 93, Marsilius said he had intended to serve only one five-year term as a trustee. But toward the end of every term there always seemed to be a reason to stay on—especially the pleasure it gave him “to see [Norwich] prosper and grow and begin to really have a place in the academic world—a strong place, and one you can be proud of.”

Long after Marsilius had left the board, when Schneider was a young university president, Marsilius would phone every now and then, just to check in. “He called me just to say hi, encourage me, tell me old Norwich stories,” Schneider recalled, adding that when he needed encouragement, “well, sometimes I’d call him.”

Immersed as they were in full and busy lives with distinguished careers and a multitude of duties and distractions, the two titans nonetheless found time for Norwich, giving back to the university that had given to them. They are among the 78 men and women whose names are carved in granite on the university’s Bicentennial Stairs, dedicated in 2019—a testimony to their service, sacrifice, support, and trailblazing achievements.