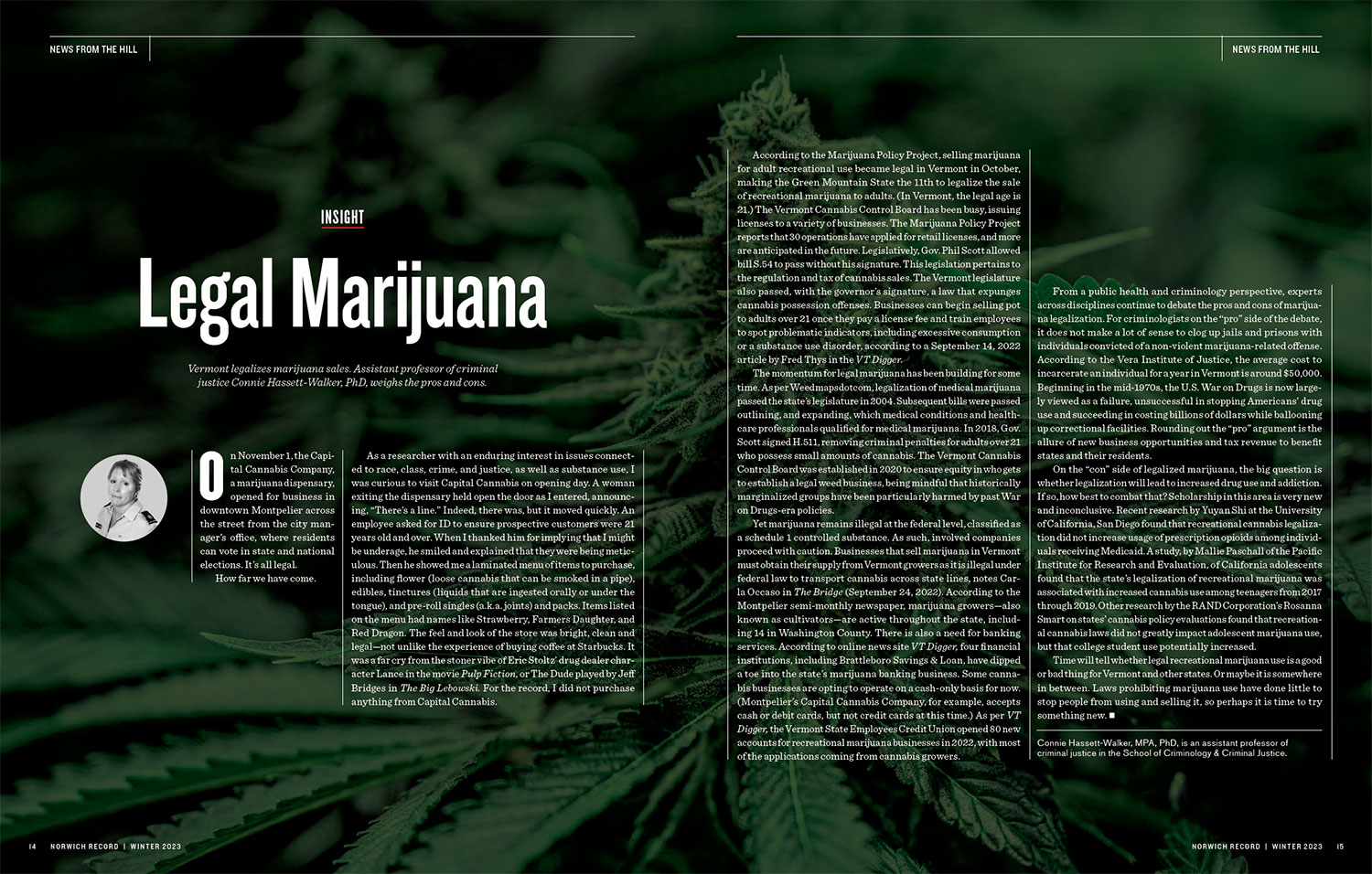 On November 1, the Capital Cannabis Company, a marijuana dispensary, opened for business in downtown Montpelier across the street from the city manager’s office, where residents can vote in state and national elections. It’s all legal.

How far we have come.

As a researcher with an enduring interest in issues connect¬ed to race, class, crime, and justice, as well as substance use, I was curious to visit Capital Cannabis on opening day. A woman exiting the dispensary held open the door as I entered, announcing, “There’s a line.” Indeed, there was, but it moved quickly. An employee asked for ID to ensure prospective customers were 21 years old and over. When I thanked him for implying that I might be underage, he smiled and explained that they were being meticulous. Then he showed me a laminated menu of items to purchase, including flower (loose cannabis that can be smoked in a pipe), edibles, tinctures (liquids that are ingested orally or under the tongue), and pre-roll singles (a.k.a. joints) and packs. Items listed on the menu had names like Strawberry, Farmers Daughter, and Red Dragon. The feel and look of the store was bright, clean and legal—not unlike the experience of buying coffee at Starbucks. It was a far cry from the stoner vibe of Eric Stoltz’s drug dealer char¬acter Lance in the movie Pulp Fiction, or The Dude played by Jeff Bridges in The Big Lebowski. For the record, I did not purchase anything from Capital Cannabis.

According to the Marijuana Policy Project, selling marijuana for adult recreational use became legal in Vermont in October, making the Green Mountain State the 11th to legalize the sale of recreational marijuana to adults. (In Vermont, the legal age is 21.) The Vermont Cannabis Control Board has been busy, issuing licenses to a variety of businesses. The Marijuana Policy Project reports that 30 operations have applied for retail licenses, and more are anticipated in the future. Legislatively, Gov. Phil Scott allowed bill S.54 to pass without his signature. This legislation pertains to the regulation and tax of cannabis sales. The Vermont legislature also passed, with the governor’s signature, a law that expunges cannabis possession offenses. Businesses can begin selling pot to adults over 21 once they pay a license fee and train employees to spot problematic indicators, including excessive consumption or a substance use disorder, according to a September 14, 2022 article by Fred Thys in the VTDigger.

The momentum for legal marijuana has been building for some time. As per Weedmaps.com, legalization of medical marijuana passed the state’s legislature in 2004. Subsequent bills were passed outlining, and expanding, which medical conditions and health¬care professionals qualified for medical marijuana. In 2018, Gov. Scott signed H.511, removing criminal penalties for adults over 21 who possess small amounts of cannabis. The Vermont Cannabis Control Board was established in 2020 to ensure equity in who gets to establish a legal weed business, being mindful that historically marginalized groups have been particularly harmed by past War on Drugs-era policies.

Yet marijuana remains illegal at the federal level, classified as a schedule 1 controlled substance. As such, involved companies proceed with caution. Businesses that sell marijuana in Vermont must obtain their supply from Vermont growers as it is illegal under federal law to transport cannabis across state lines, notes Carla Occaso in The Bridge (September 24, 2022). According to the Montpelier semi-monthly newspaper, marijuana growers—also known as cultivators—are active throughout the state, including 14 in Washington County. There is also a need for banking services. According to online news site VTDigger, four financial institutions, including Brattleboro Savings & Loan, have dipped a toe into the state’s marijuana banking business. Some cannabis businesses are opting to operate on a cash-only basis for now. (Montpelier’s Capital Cannabis Company, for example, accepts cash or debit cards, but not credit cards at this time.) As per VTDigger, the Vermont State Employees Credit Union opened 80 new accounts for recreational marijuana businesses in 2022, with most of the applications coming from cannabis growers.

From a public health and criminology perspective, experts across disciplines continue to debate the pros and cons of marijuana legalization. For criminologists on the “pro” side of the debate, it does not make a lot of sense to clog up jails and prisons with individuals convicted of a non-violent marijuana-related offense. According to the Vera Institute of Justice, the average cost to incarcerate an individual for a year in Vermont is around $50,000. Beginning in the mid-1970s, the U.S. War on Drugs is now largely viewed as a failure, unsuccessful in stopping Americans’ drug use and succeeding in costing billions of dollars while ballooning up correctional facilities. Rounding out the “pro” argument is the allure of new business opportunities and tax revenue to benefit states and their residents. On the “con” side of legalized marijuana, the big question is whether legalization will lead to increased drug use and addiction. If so, how best to combat that? Scholarship in this area is very new and inconclusive. Recent research by Yuyan Shi at the University of California, San Diego, found that recreational cannabis legalization did not increase usage of prescription opioids among individuals receiving Medicaid. A study, by Mallie Paschall of the Pacific Institute for Research and Evaluation, of California adolescents found that the state’s legalization of recreational marijuana was associated with increased cannabis use among teenagers from 2017 through 2019. Other research by the RAND Corporation’s Rosanna Smart on states’ cannabis policy evaluations found that recreational cannabis laws did not greatly impact adolescent marijuana use, but that college student use potentially increased.

Time will tell whether legal recreational marijuana use is a good or bad thing for Vermont and other states. Or maybe it is somewhere in between. Laws prohibiting marijuana use have done little to stop people from using and selling it, so perhaps it is time to try something new.

Connie Hassett-Walker, MPA, PhD, is an assistant professor of criminal justice in the School of Criminology and Criminal Justice.