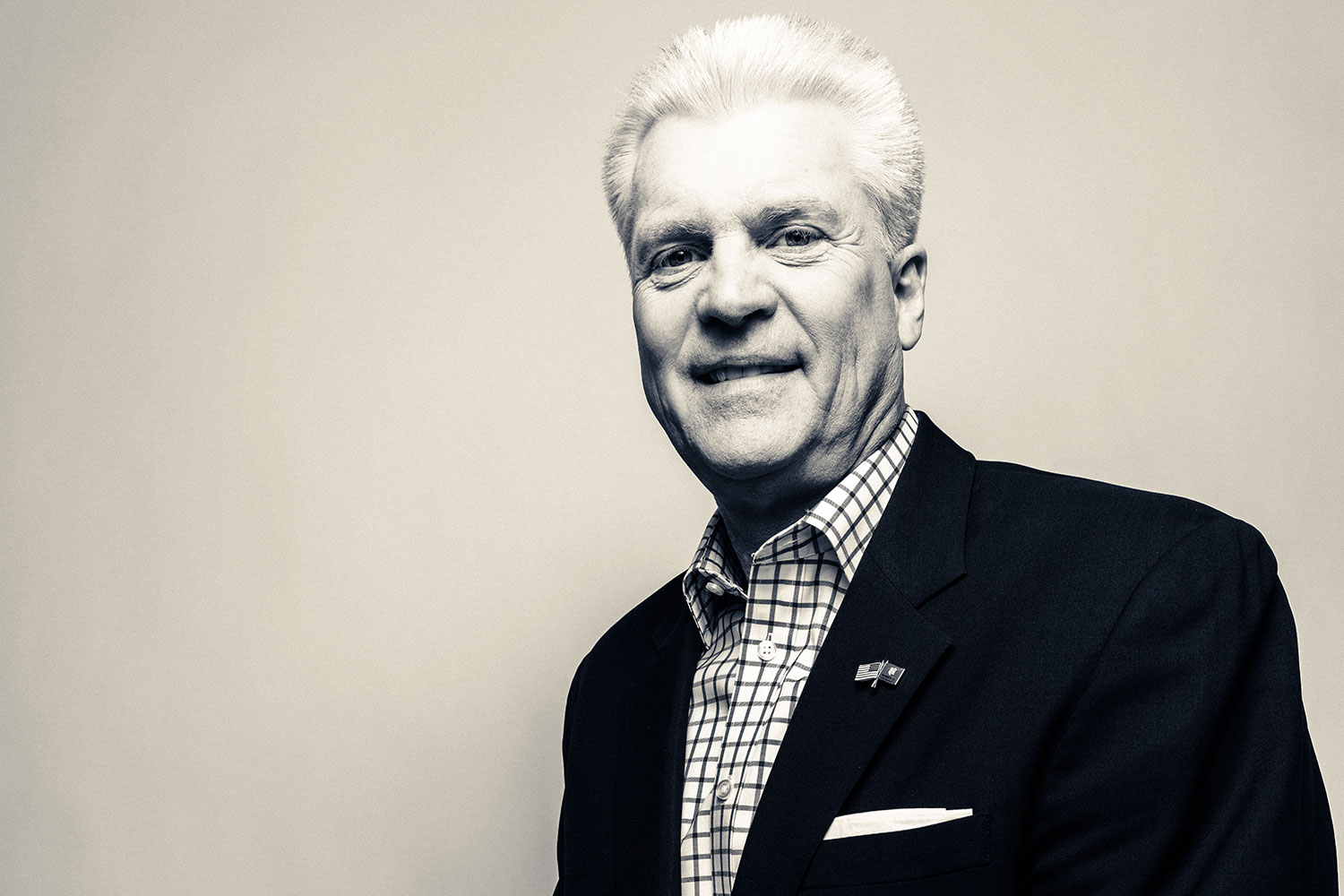 Keith Gelinas ’84 thought he’d make the Air Force a career after graduation. “I just loved what I was doing in the military,” he says. At the time, he was serving as a missile launch officer in the 91st Strategic Missile Wing (The Roughriders) stationed at Minot Air Force Base in North Dakota. But five years in, with a new MBA under his belt, he reached an inflection point. “I started to take a step back and thought wow, there’s this whole world out there that I can have an influence on with what I’ve learned in the military.” Gelinas began his corporate career “carrying a bag” as a regional field sales rep for Federal Mogul Corporation, the Michigan-based multibillion-dollar car parts manufacturer. He moved up the ranks to regional and general sales manager, eventually overseeing a staff of 36 and $120 million in annual sales. And that was just the beginning. In the ensuing decades, the globe-trotting father of four charted a highly successful career as a Chicago-based sales and marketing executive for automotive, heavy industry, manufacturing, and satellite companies as well as a venture capital—funded software startup. Insights from his experience could fill a graduate seminar at Wharton. In 2019, he joined Amazon Web Services (AWS), the cloud computing arm of Amazon, as a senior practice manager helping companies like Volkswagen, Honda, Hyundai, General Motors, and Harman Kardon implement cloud computing solutions. The Norwich University School of Business Board of Fellows member and Athletic Hall of Fame cross country runner sat down with the Record during a recent campus visit to share insights on his career, working at AWS, and why speed matters in business.

At Amazon Web Services, one of your projects centers on building an industrial cloud for the automotive industry. Can you elaborate?

We have a very good partnership with Volkswagen. Volkswagen’s CIO, Martin Hoffmann, challenged the brand to be on the leading edge of digitalizing production for an automotive company. Certainly, transforming production is a key output, but the real goal is to be able to leverage data from production and turn that into a “Software as a Service” (SaaS) business. In order to achieve its goal of leveraging the data, VW needed to implement a digital production platform into its 126 plants around the globe. The digital production platform allows plant managers to go out to the cloud, grab a software application, bring it to the plant’s production floor, and then customize it for their operations within the plant. That could be driving a robotic arm on the floor of the plant, for example. Or it could be something else, like predictive maintenance on machines that run in the plants. When do I have to fix those machines before it becomes a major problem?

At AWS, we work backwards from our customers’ business needs and develop mechanisms to outline how we’ll achieve those goals: What are we trying to accomplish? Over what time period? What resources do we need? What funding do we need? I led the effort in writing the narrative on taking the digital production platform, bringing it into a cloud computing industrial cloud environment, and extending it to the rest of the automotive industry, other OEMs [original equipment manufacturers] and tier-one suppliers. Once implemented, it allows automakers like VW to make better-informed decisions, to pivot on the line and change the production flow of their vehicles if needed.

Absolutely. The data is the backbone that makes all of this technology work. It’s the reason why we do what we do at a company like AWS. It’s also what drives the result. You need the data to feed into a data lake, or a centralized repository that allows you to store all your structured and unstructured data at any scale. You have to have the data first before you can run an analytics layer or a machine learning layer on top of it. So what we talk about often is filling the data lake—taking data from all the points of a company, whether that’s manufacturing data, finance data, human resources data and filling the data lake with all of that information, then running applications on top of it to make informed business decisions.

Is AWS different from other companies you’ve worked for?

I’ve never worked at any company quite like AWS. It takes a while to understand how AWS thinks, up and down the organization, and about the way that it approaches its business. There are a lot of what we call “mechanisms,” or programs, that we use to move the business forward. Those mechanisms are always evolving—there are always things being added to them. So, early on, I realized that every single day that you work at AWS, you’re learning something new. This is what makes the work fulfilling; you’re constantly learning, building new technologies, and working alongside customers who are changing their businesses through the cloud.

AWS actively recruits military veterans, and you’ve mentioned that you mentor three such recent hires. Why are veterans sought after at AWS?

The discipline, the work ethic, the ability to get in there and roll up your sleeves—you can’t be successful in the military without those attributes, and those are some of the same attributes that make people successful at AWS, as well. At AWS, we call some of these attributes Leadership Principles.

Can you talk about those?

One of the leadership principles, Learn and be Curious, really has a lot to do with what drives you internally to want to be smarter tomorrow than you are today. It never stops. I don’t care if you’re 40, 50 years old. At AWS, you’re learning something every day. It’s about striving to continually improve yourself, finding new opportunities and exploring ways to act on them.

Another leadership principle, Ownership, is rooted in the same values that Norwich instilled in me. When you raise your hand and you say that you’re going to take something on, you need to own it. You own the responsibility to deliver and don’t sit back saying, “That’s not my job.” Similarly, our Bias for Action leadership principle challenges us to take calculated risks to achieve our goals.

Ultimately, it’s about leveraging these skills every day to innovate for our customers.

What’s your management philosophy? You’ve led hundreds over the course of your career, sometimes building nation¬al sales and marketing teams from scratch. How do you think about it?

I’ve read a lot of leadership books, a lot of management books, but overall my management philosophy is pretty simple. Number one, I believe that you lead from the front. If you want to motivate a team of people to be high performers, you set the bar for them. You demonstrate to them what leadership and successful management looks like. You show them rather than try to tell them. I’ve worked for some really, really good people, and I’ve worked for some people I probably wouldn’t care to work for again. But the ones who were the good leaders, I always can look back and point to the fact that they set a great example. There were things they did that you wanted to emulate. In my mind, that’s probably the key part of being a good manager and being a good leader.

I also think that you have to set expectations and deliverables that are both realistic and challenging. You can’t set an objective that’s so ridiculous that people know they’re never going to achieve it. I think that’s demoralizing. But you also have to share your vision of how you think the organization can move from its current spot to a better one. When you sit down and take the time with somebody to explain how and why you think they can get there, then all of a sudden you see the light bulbs turn on. You see the wheels start turning, “Oh, yeah. Okay. I see that now. I think we can get there.”

The other area, which is an intangible but so important, is empathy. I think we take a lot for granted in the world we live in today, and we forget that everybody has a story. Everybody, at some point, is struggling a little bit; whether that’s personally, with their family, with their job and trying to understand what they have to deliver, maybe it’s physically. I think it’s so important to try to connect with your employees. It gets hard when you start to become a manager who has a responsibility for a lot of people. It’s hard to find that time to communicate. You really, really have to make the effort. It’s not easy. But, I’ve learned from people who have been really good at it—you can feel a connection when they’re talking to you that they truly do care.

Growing up, I spent a lot of time with my grandparents and other family members who were successful people. They had a tremendously positive impact on my life. The thing I learned from them was that we all have a choice of who we spend our time with. We can spend time with people who are uplifting and fulfilling and challenge us to be better human beings, be better than what we are today, or we can spend time with people who are contentious and see the glass as half empty. Number two, and the next part of that, is pay it back. Be generous with your time. This is why I do what I do today, in giving time to the Board of Fellows for the School of Business. I can trace these leadership skills all the way back to conversations I had with my grandfather when I was probably 15 years old. I learned those things at an early age. I know that without those influential people in my life, I would not be where I am today, and so I want to pay that back. I want to give that to this generation of kids who are growing up and try to help them be successful in their careers.

Third—and it’s a hard one, I have a family and four children—you can really get caught up in your business career and all the other things around you and then forget that you’ve got a family, who you also have the opportunity to be a role model for. I hear people say, “Oh, family first, family first.” You have to put that into action. You have to be conscious of doing what’s right for your family, and sometimes making a sacrifice that you don’t want to. Maybe that’s even in turning down a promotion opportunity, because it’s just not the right thing for your family.

The last thing is, and it’s one word, and that’s humility. I try very hard to have humility and realize that there are a lot of people out there who are a heck of a lot smarter than me. I try to listen to those people and also realize that I’m just one per¬son trying to do the best I can. That doesn’t make me better than anybody else.

Interview condensed and edited for content, length, and clarity.