A College That Changes Lives 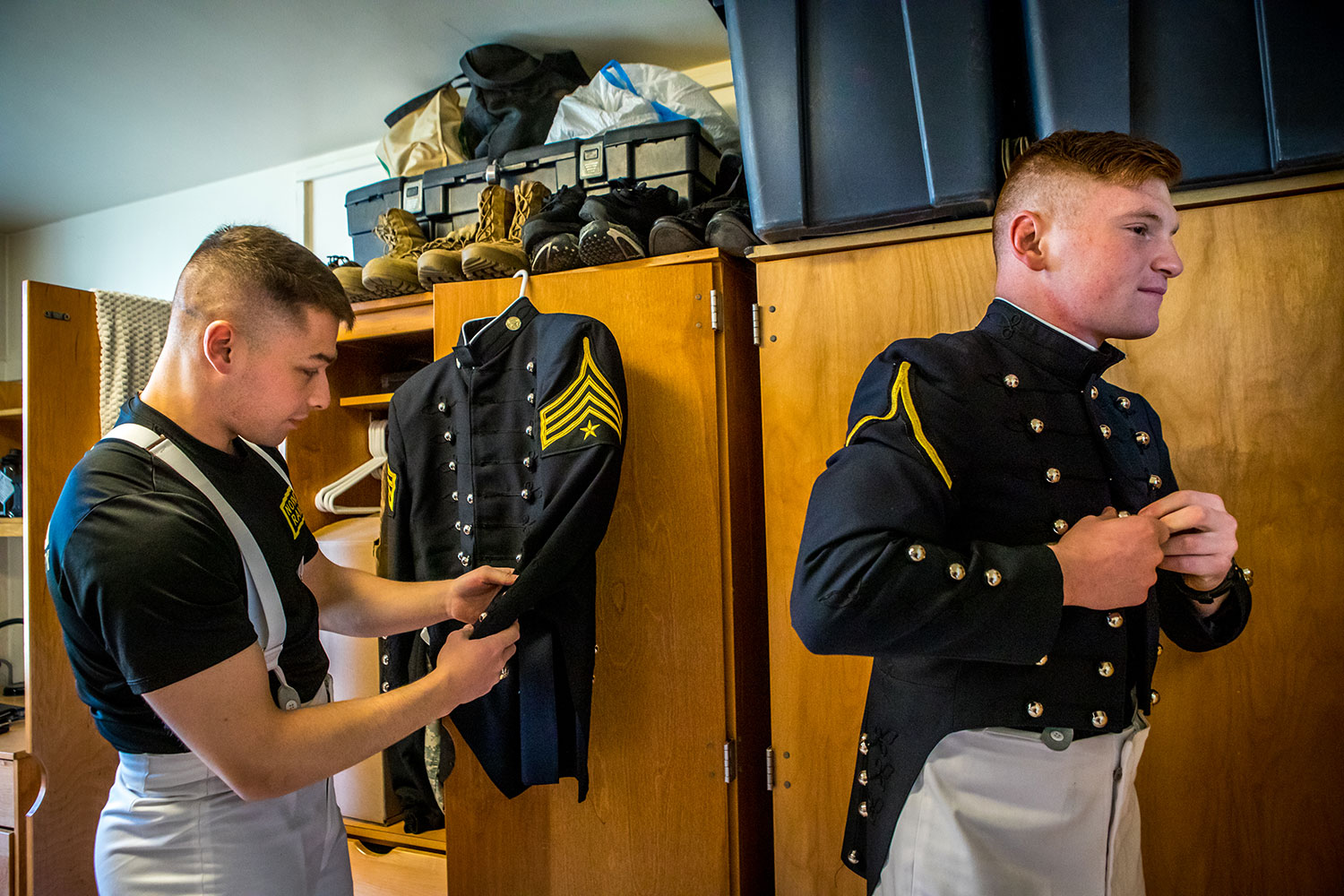 It’s the last Saturday in April—graduation and commissioning day for the Class of 2022. As rites of passage go, nearly a trifecta. Photographer Nancie Battaglia and I are due to stop by Raf Ribeiro’s ’22 Wilson Hall barracks for a brief photo session. Ribeiro texts early in morning to ask if we can delay our get-together 20 minutes. He and his roommate/rook buddy/good friend, Jacob McGrail ’22, want to tidy up a bit more. When we arrive, Ribeiro and McGrail greet us in white Class A uniform trousers with suspenders over matching black Ranger Company T-shirts. Tall and fit as Buckingham Palace guards but with smiles as wide as the Upper Parade ground, they usher us inside and prop open the door with a sandbag named “Patrick.” Ribeiro pushes a broom across the floor one last time, then buttons up his navy-blue tunic, gamely dressing for the camera on this, his last day as a Norwich senior and member of the Corps of Cadets.

Ribeiro is a first-generation American. He was born in Florida but grew up in Vermont, the son of a French-Canadian doctor and a Brazilian father. A biology major who speaks three languages (English, French, and Portuguese), Ribeiro plans to attend medical school like his mother one day. But first, he will commission into the U.S. Army as a second lieutenant, heading to Fort Benning, Ga., for his Infantry Basic Officer Leadership Course in June.

“How has Norwich changed you?” I put the question to Ribeiro earlier that week. The introspective senior says it’s something he has asked himself often. “It’s been a life-changing experience,” he reflects. “I learned a lot about myself and how much I love to pursue challenges that might seem way beyond my reach.” The list is long, from athletics to his major to Ranger Company. As a sophomore, Ribeiro enlisted in the Vermont National Guard, motivated by his sense of gratitude for being a first-generation American and the privilege he felt to grow up in this country. “I felt like it was my duty to be the first one in the family as an American to be in military.”

Over the course of his four years at Norwich, Ribeiro learned many things, among them the finer points of character and discipline. “You’re the sum of your friends,” he says, citing the familiar axiom. “Your character is the sum of the character of the other people you hang out with.” Ribeiro says he’s also grown “to understand that your daily habits and your daily routine are imperative to your success or your failure. If you have habits where you’re not pushing yourself or you’re not structuring your day towards what you want to do, then you’re not going to get anywhere.” His goal is to constantly improve, to be better tomorrow than he is today. His drive is not for personal glory, but a desire to help others. “The better you are, the better prepared you are to help.”

I ask the 22-year-old where his preternatural wisdom comes from. “I’m not going to give myself any of that credit,” he demurs, saying (implausibly) that he’s never been naturally good at anything. “I just listen. I’m a sponge, and I listen to everyone—I don’t care who you are. I will listen and I will think about it. I think that’s an important skill for everyone, and it’s overlooked. A lot of people don’t listen. A lot of people are entrenched in their own beliefs from their own experiences. And that’s just not how it works if you want to truly learn. That’s my key—I just want to learn.”