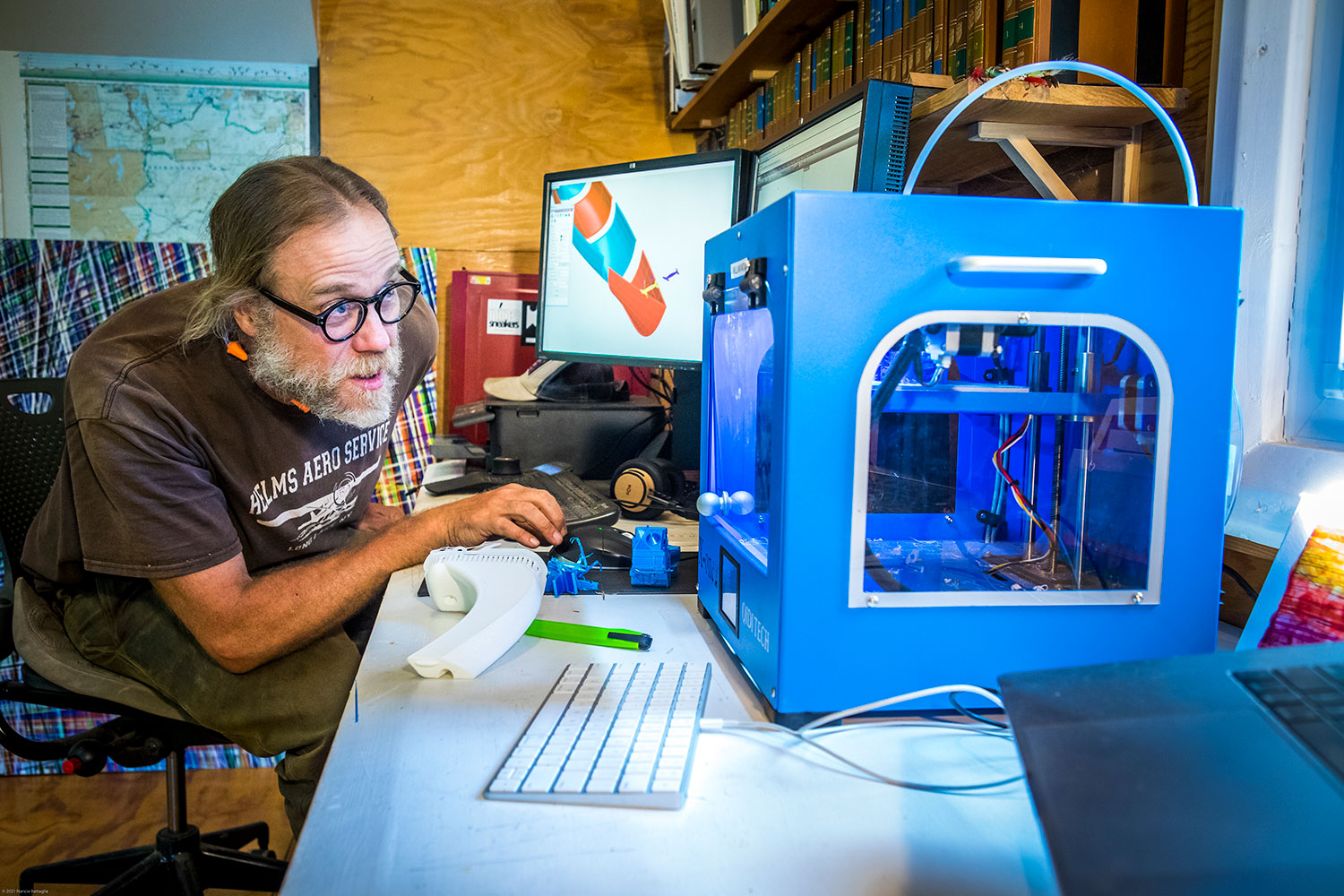 Reprinted with permission from the December 2021 issue of Adirondack Life magazine.

John Henry Rushton was a trendsetter. The Canton, New York-based boatbuilder, who made top-of-the-line watercraft in the late 19th and early 20th centuries, was egged on by his famous customer George Washington Sears, aka “Nessmuk,” to design smaller and smaller boats for the diminutive adventurer. When Nessmuk talked up his ultra-light canoes in regular columns for Forest and Stream—including the pocket-size Sairy Gamp, weighing only 10.5 pounds—the fad caught on, though Rushton wasn’t entirely happy about it. “The trouble is, every damn fool who weighs less than 300 thinks he can use such a canoe too,” he wrote to Nessmuk in 1886. Adirondack Great Camp pioneer William West Durant, who caught a glimpse of the Sairy Gamp as it was being built, was one of those eager to jump right in. But Rushton knew better, insisting Durant needed the dimensions of an older, slightly larger Nessmuk model. The result was a boat Durant called the Wee Lassie, the granddaddy of today’s pack canoes that’s on display at the Adirondack Experience museum, in Blue Mountain Lake, New York. Now that pinnacle of old-time craftsmanship is serving as a model for the latest technology.

In late 2019, longtime friends Matt Burnett and Matt Lutz traveled to the Adirondack Experience to scan the Wee Lassie, in order to replicate Rushton’s masterpiece using a 3D printer. With 3D printing, structures are built one plastic thread at a time, a slow process that’s generally used for smallish projects, not full-size boats. So why the Wee Lassie?

Burnett and Lutz have both been using 3D printing in their classrooms, the former in his art and design classes at the State University of New York, Canton and the latter with his architecture students at Norwich. “I love it as a teaching tool,” Burnett says. “There’s a programming aspect, a design aspect, a physical aspect.”

The process can also get students thinking about the role technology should play in their lives. “I’m responsible for teaching my students what the next technological advance is going to present in terms of possibilities and opportunities,” Lutz says. “And I want to be able to present that in such a way that it’s not encouraging the students to just to use the technology for the sake of convenience, but to use it to do something that would otherwise not be able to be accomplished.”

When Lutz started looking around for a full-size project that he could print and test against the original — big, but not building scale — he hit on the idea of a classic canoe. “What Rushton was able to do, with a limited amount of material, is really extraordinary. And he was doing this without fancy machines, without power planers and power tools. And so I wanted to look at, with all this new technology, what potentials did that unlock?”

Lutz was awarded a five-week residency at the Boston-based BUILD Space of Autodesk, a 3D-design software company. With access to their three-foot-by-three-foot printer, he made his replica in five sections, modifying the design to fit his 6 foot, 1 inch, 200-pound frame. To save weight, the pieces were fashioned with honeycombed interiors. “It’s like a shell with some really, really, minimal infill,” Lutz says. Next he coated the whole structure in resin and fiberglass.

Lutz has since tested the John Henry on a pond near his home, and he has few complaints, though he admits it will never outshine the original. “It paddles great,” he says. “But I knew going into this, that’s tough criteria to beat.” For starters, the John Henry weighs 32 pounds, 12 pounds more than its older counterpart. And even with cutting-edge technology, the project was no quicker than an old-school build. “This whole process for me, scanning everything and learning the software and learning how to do the resin and learning fiberglass, I have at least three months of learning and fabrication,” he says. “If I was starting from scratch with wood and block planes and hand tools, could I have a wooden canoe in three months? Yeah, I probably could.”

What 3D printing does offer, Lutz says, is versatility. “I can take the design and I could add another foot to it, I could make it a little wider, I could make it a flat bottom in a matter of hours and then print it and then have the formwork for it. So once I’ve got the base form in the computer, it’s really easy to modify.” Going forward, Lutz can imagine other uses for the technology — fabricating cladding, maybe, or a frame for a house.

Burnett, who is also an artist, outdoor guide and boatbuilder-in-training, has a deep love of guideboats, going back to childhood days romping around Whitney Park. His father was head forester there, and he grew up with access to a camp on Little Tupper Lake. “I have so many memories of being in guideboats with my father as a kid,” he says. “I didn’t know how special they were, it was just the boat we fished in.”

Taking a boat so steeped in tradition and memory and rebuilding it with plastic components might seem like sacrilege, but Burnett doesn’t look at it that way. “I’m not such a purist,” he says, adding that all working boats became mismatched over time, patched with whatever materials were available. So, he’s using his restoration project as a test-drive, practice for when he turns the pine boards stacked on his porch into a from-scratch traditional guideboat. But the scheme also offered him a compelling experiment: Can this technology maintain a design that can’t be improved on? Or maybe even improve on it?

Traditional ribs were crafted from light but sturdy spruce roots, cut from a boatbuilder’s cache of templates. “The ribs are difficult parts to recreate,” says Burnett. Each has a slightly different parabola, or curve, which changes with the dimensions from stem to stern. Back in the heyday of guideboats, “they didn’t have scientific calculators to figure out these parabolas. With 3D printing, you can do it again and again and again once you get it right.”

First, you have to get it right, and that’s taken some trial and error. Burnett’s original idea was to build a tall 3D printer, one that could produce an entire rib in one piece. But he found that ribs that are fabricated vertically break more easily. So his solution was to make the ribs in two sections and epoxy them together. The weight of the new rib is approximately equal to a traditional rib, and it’s produced in a fraction of the time.

Still, each rib takes seven hours to print, and there are 48 ribs to replace. But Burnett’s rehabbing operation doesn’t have a firm timeline. “I’d like to be paddling this thing by next spring,” he says. “Either it’s floating or it’s a Viking funeral.”

After that, he can turn his attention to those 20-foot lengths of perfectly planed, knotless pine that are waiting for him on his front porch. No word on whether he’ll use plastic or spruce ribs on the boat — he says it all depends on how his Frankensteined version performs in the Adirondack elements.