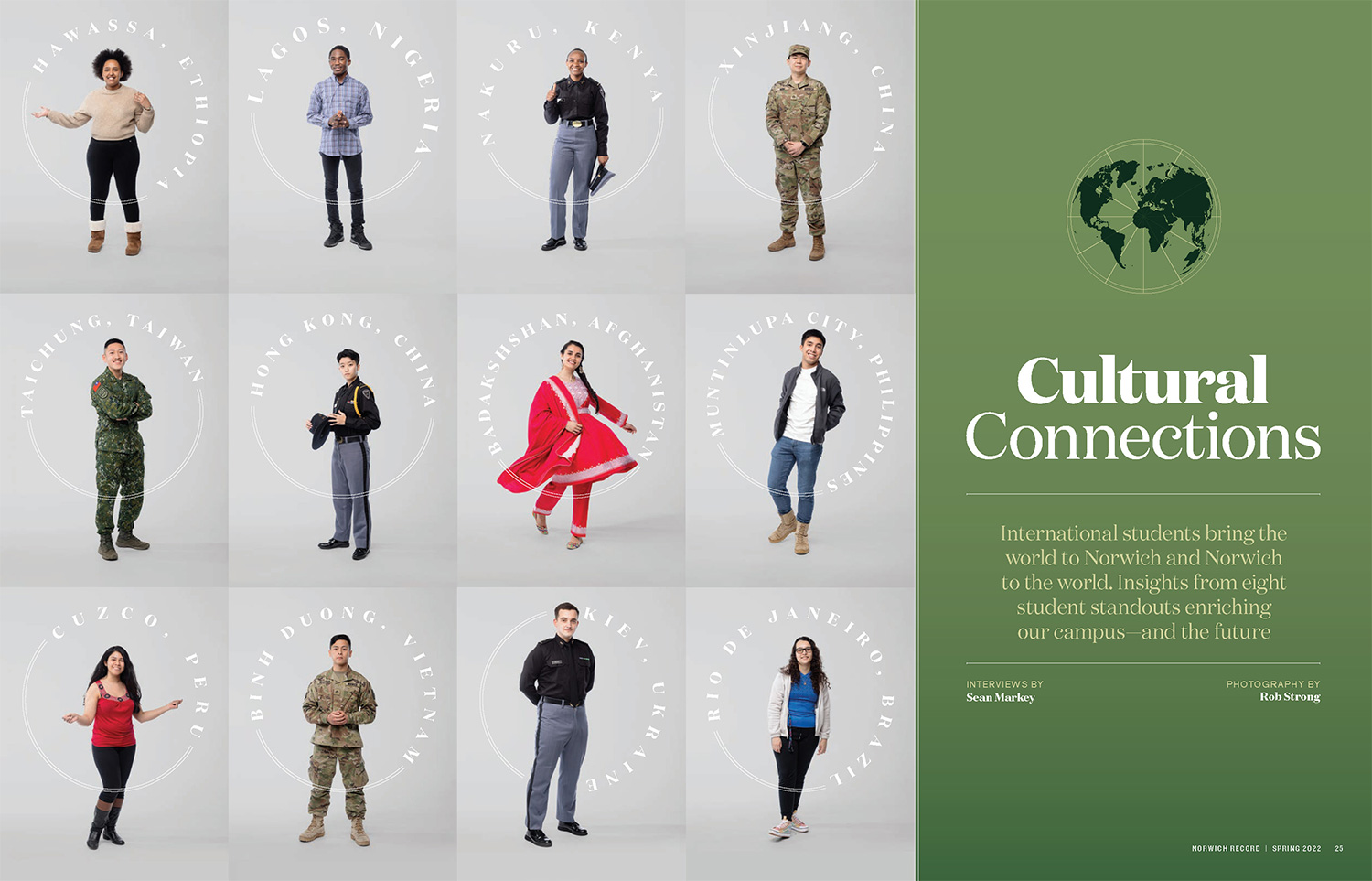 International students bring the world to Norwich and Norwich to the world. Insights from eight student standouts enriching our campus and the future

“Since I was a child, I wanted to be a doctor. Neuroscience is fascinating to me—especially the brain. My dad is a research scientist in plant science and a PhD. I’d like to follow his example but in a different direction. My plan after graduation is to go to medical school specializing in neurology or to graduate school and complete a postdoc to study neuropsychology. Not many schools offer a neuroscience major at the undergraduate level. I found Norwich and transferred my sophomore year. It’s cold and remote. I thought I wouldn’t fit in because I’m also a foreigner. But as months passed by, I built great communication with my professors and advisers. They encouraged me to double major in psychology. There are a lot of people helping me out in my future career now. I’m even thinking about a minor in leadership. They’re just giving me this new idea, what I want with my life and my future and what will push me to become what I want to become. It’s just like a huge family to me, Norwich. Studying here taught me how to stand up for myself, how to engage with people, leadership, problem-solving — all of that.”

“My grandpa was in the Air Force, and my dad was in law enforcement. I’m the first career military guy in my family, so I’m really proud of it. It combines my interests and what I really want to do in the future. When I was little, I really liked American culture. I grew up watching Black Hawk Down. I’ve been at Norwich all four years. Before I got here, I’m just a typical Asian kid, always pretty quiet, pretty afraid to talk to people, especially in class, because it’s not what we’re used to in the school environment in Taiwan. But coming to Norwich, going to classes and interacting with all those American students, it’s helped me gain my confidence as a future leader and formed that leadership capability for me and to become a more competent leader in the future. Joining Ranger Company freshman year is one of the best choices I ever made. Going through hard training with similar-minded people who want to do something big in the future is really motivating.”

“I’ve always liked computers. I like to think out stuff. When I was researching jobs, the tech field is very good. Since I like computers and engineering jobs are good, too, I chose computer and electrical engineering as my major. Maybe I’ll work on tech like Tesla or devices like computers and smartphones. My future career plans are to get rich and work in a big tech company and earn enough money to live a comfortable life here in America. I chose Norwich because it’s a great school and it’s military. My dad is military. He’s in the Nigerian Navy. My experience at Norwich is great. It’s amazing here. Everyone is like family to me. Norwich is the first school to accept me. I like this school because of its diversity and service to others. You help each other with your burdens. I bring my loyalty, hardworking spirit, and strength. I promise to do my best to serve the school and represent it well after graduation.”

“I joined the Corps of Cadets after my freshman year. I was a girl who had never been to a gym before coming to Norwich and joining the Corps. It was a challenge that I set for myself, and I’m glad I did it because through the process I learned so many things about myself. Not just about my weaknesses but also about my strength. Another reason I joined was the whole idea of being part of a unit, making friends and experiencing American culture.

I can speak six languages, and after graduation I want to pursue a PhD in Islamic studies. I’m an English major and one of the reasons that I love my major is because it introduced me to so many perspectives— something that, at least in my high school education, I was not introduced to. I needed that critical thinking point of view.

Maybe I’m rather optimistic, but right now I think women in Afghanistan are aware of the fact that they have rights. They have equal rights to education and have equal rights to work, being in the workforce, and get¬ting paid for what they contribute. That awareness creates a sense of optimism in me that the fight will go on.”

“After graduation, my short-term goal is to go back to Hong Kong and join the Hong Kong Police Force. In the long-term, I want to work for Interpol. That’s why I came to a foreign country to study. I was 16 years old when I first came to the U.S. The only option for me to complete my high school diploma and college credits at the same time was community college in Washington State. I did a lot of research on military schools. Norwich is the oldest private military college in the nation, so that’s why I decided to transfer here — to gain the experience and be ready for my future law enforcement career, which I’ve dreamed about since I was six. I think leadership is the most important thing I’ve learned at Norwich. As far as the things I’ve enjoyed most here, first is the family. I’m in the Cavalry Troop; they really take care of you, and everyone is connected. Second is the junior ring tradition. The saying we learned is that someone doesn’t give you something, you earn it. That’s the thing that we are trying to do at Norwich. Everything that we earn, we deserve it. That’s really important.”

“My career dream is to become a nurse practitioner and have my own clinic. My grandmother was my main inspiration to become a nurse, although she passed away last year. She was a traditional midwife. I saw her helping people, taking care of nursing mothers, being there for them all the time. It was a great act of humility. I was so inspired by her actions and her willingness to take care of people. I’ve learned a lot at Norwich. I’ve been able to discover some of my potential that otherwise I wouldn’t have been able to discover. It helped me realize that I have a lot of resilience, which I didn’t know I had, and how challenges have shaped me and taught me to be strong enough, to be courageous enough to fol¬low my dreams. My experience in the Corps has been awesome. Coming to a new place, finding a new family, going through challenges, stressful and tough moments together obviously knowing that there are people who are watching your back, always there when you need them — it’s something that is so inspiring to me.”

“Arriving at Norwich as a freshman, the cultural clash was pretty impactful for me. Coming from a place where I had a lot of friends in high school, then feeling like the outsider, it was pretty rough for me the first year, especially because my English fluency at the time wasn’t that great. But I think I grew more professionally as a result. I’m very academically oriented and belong to the honor societies in engineering and civil engineering. I think I learned to value myself more. Being here by myself proved to me that I can do great things and that I chose the right career. I’m really determined and really work hard for everything that I’ve accomplished professionally. I plan to move to Boston after graduation. I’m looking for internships and jobs there in structural engineering. My father is a civil engineer and most of his siblings are civil engineers and architects. I didn’t go to worksites with him like some children do. But whenever my dad came home, I would see the drawings in his laptop in Revit and AutoCAD. I always loved the way they looked. In 10 years, I hope to be a project manager specializing in structural engineering. I plan to become a professional engineer and hopefully get my masters. I’m thinking about later studying architecture.”

Editor’s note: Rodion Pedyuk spoke to the Record before the Russian invasion of Ukraine.

I’m one of two Ukrainian students here. I’m proud of my Ukrainian culture, which I love. It’s very diverse and it’s very old, dating back to the 1st century. We’ve had conflict in Ukraine for nearly eight years now. In my high school, I was head of our volunteer department. One of these events was taking care packages to soldiers on the front line. I visited some local hospitals for injured soldiers. When you see some young man with no limbs or so severely injured that they might not live a normal life again, it makes an impact on your life. I believe that cyber-security and the cyber field right now is another battlefield. It’s a virtual one that does not involve human lives as much. I want to make an impact in our world, ensure that our data is secure. That, for example, another leak from Facebook won’t ruin your life because it’s leaked your social security number and your banking info. It’s kind of my little milestone to get a Ph.D.

My favorite thing about Norwich? I think it’s the people and cultural difference. America is a melting pot of cultures and nations. The diversity that we have at Norwich, I never saw anywhere. In Ukraine, it’s mostly white people, who have mostly never been to another country. I was lucky and fortunate enough for my parents to be able to send me here, to be able to expose me to the world.

I think all of us humans have our mission statement, just like Norwich does. My mission at Norwich is to give back to the community of Norwich and Vermont as a thank you and show of respect and gratitude for opportunities that I was given, because I love this place. It has given so many opportunities in life, the ability to succeed and all the tools you need to succeed here, that I want to give back to this community.”

Interviews condensed and edited for length, clarity, and style.