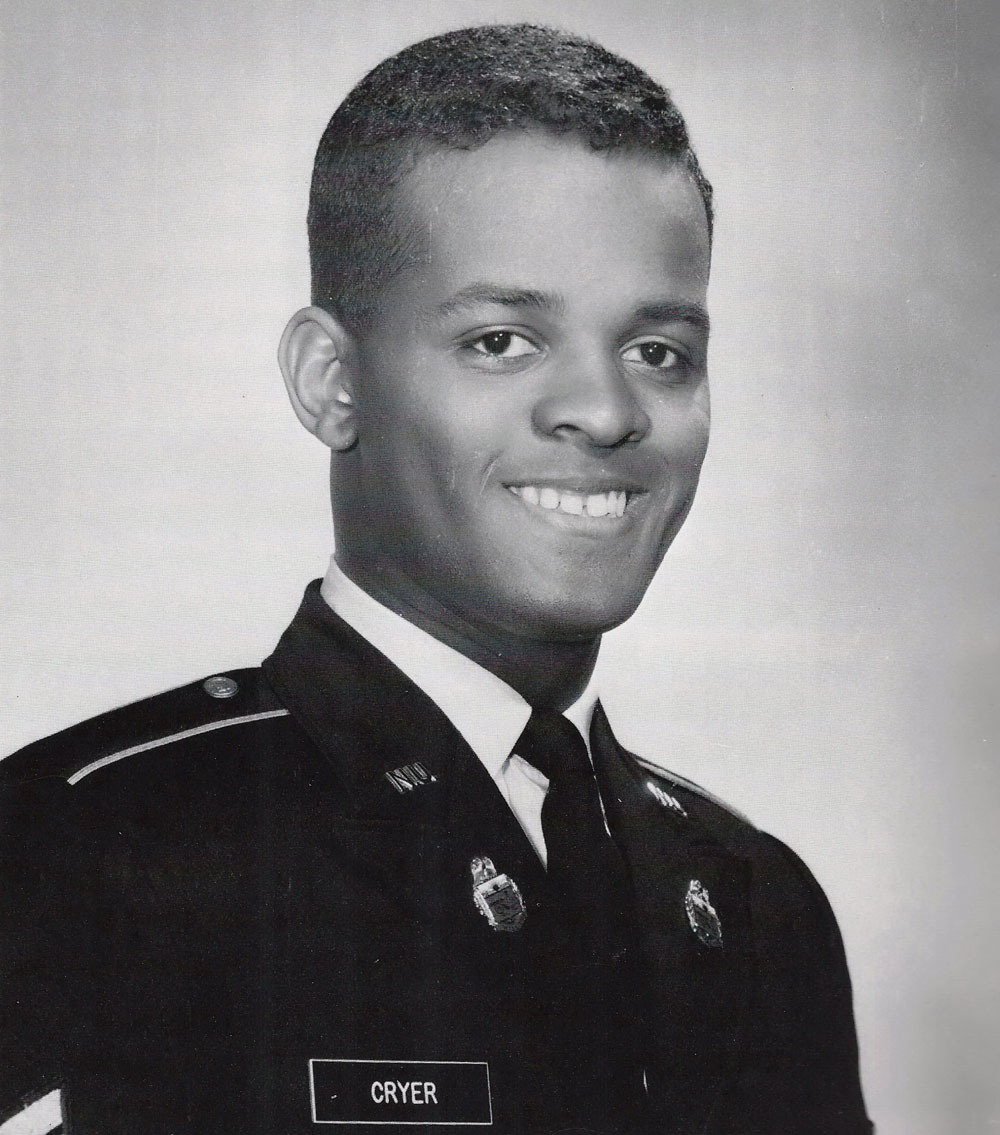 I’m writing this remembrance on Martin Luther King Jr. Day, a day appropriate to pay tribute to a special person who changed my outlook on life and that of many others.

Bill Cryer and I were assigned to be freshman roommates and began our Norwich education together in the fall of 1964. We both aspired to be engineers. Bill was the first in his family to attend college, and he was determined to live up to the opportunity that had never been available to his ancestors or parents. The beauty of a Norwich education is that everyone starts the journey from the same spot. From there, you earn your advancement based on your own merit, capabilities, and commitment. Bill’s determination and his family’s commitment rubbed off on me. We both nailed our academics in our freshman and sophomore years, while passing on the readily available social opportunities and most extracurricular activities. I also learned to concentrate while Bill practiced his trumpet across our shared desk. We enjoyed conquering the challenges of the Norwich life and had many good laughs about it. We both had steady girlfriends but, sadly, given the social attitudes prevailing at the time, we chose not to go on double dates together. Bill was warmly embraced by my folks and was a guest at our home whenever he needed to escape NU. His wonderful parents became friends of our family.

At one point early in our years together, Bill’s family was burned out of their Massachusetts home. During the blaze, his mother, Victoria, was seriously injured trying to rescue the foster children she took in to help pay for Bill’s education. His stoic reaction to that experience was rooted in the strength of his deep faith, which was quietly present every day, and a sense of duty to finish the journey that he had embarked on. I learned a core life lesson about toughness, humility, faith and perseverance from his example.

As sophomore roommates, we pulled each other forward and continued to have good academic results. We were both chosen for responsible positions in the Corps of Cadets. Bill was admired and loved by everyone he encountered at Norwich. He was meritoriously on track to be one of the senior leaders of the student body, something he never sought and never flaunt¬ed. We agreed to room together again in our junior year as we started to discuss our aspirations for life after college. We both were offered summer internships in industry, something quite rare in those times. Bill secured a position at Eastman Kodak in Rochester, New York, and I landed one in Ohio. We were on our way! When I took a brief detour just before my internship to have shoulder surgery, Bill faithfully came to check on me in the hospital before heading home and onward to Kodak. I vividly remember some force telling me to get out of my hospital bed to look out the window after Bill left my room. By chance, I saw him driving away in his little white Ford Falcon.

The summer of ’66 was a restless time in the U.S. The Rochester, New York, area was among the many that were racially charged. Yet Bill was undeterred and was excelling at his job. Absent today’s internet and cell phones, we sent letters through the post office to schedule the occasional telephone call by landline. We checked in a couple of weeks before the end of summer and had planned to drive back to New England and Norwich together.

A few days later, my boss approached me solemnly and told me that there was a call waiting from my dad. His news was beyond devastating — Bill had died, cause unknown, three months short of his 20th birthday. I had lost someone who I loved as a brother, and his family had to deal with yet another tragedy. Bill was buried wearing his Norwich uniform, with four of us in ours as his honorary bearers. His dad never recovered from the heartbreak and died a few years later. My life had been changed forever, as had others.

I still think about Bill every single day.

Bill would have excelled at whatever he did, as he always had. He would have had a beautiful family and contributed to his community and profession. I had so much looked forward to knowing his children and having mine grow up knowing them and Bill. Although he never sought recognition or self-promotion, he had the natural human leadership qualities that inspired people who encountered him — absolute honesty, sincerity, humility, sense of purpose, caring for others, loyalty, perseverance, humor and much more. I want to believe that, although he would have been very troubled by the continued inequities in this country, he would have contributed positively to progress. He would have made a great president.

I know that the best way to honor Bill Cryer’s life is for all of us to do everything possible to ensure that all Americans have the same opportunity to receive whatever education they strive for, the opportunity to live and work where they choose, and the opportunity to fully participate in our democracy and governance. This is not to say that outcomes should be guaranteed. But the opportunity to start the race of life side by side with everyone else must be made available to everyone, especially all of our country’s children. Bill’s brief life is an example of what good can happen under those circumstances. Now it’s up to the rest of us.

God bless you, Bill. You were the best human being I have ever known, and I have been blessed to know and have known a lot of very good human beings.

Richard Hayden ’68, a Northfield native, is an aerospace technology developer and executive, who currently serves as the president of Technology Integration LLC, in Sudbury, Massachusetts. A third-generation Norwich engineering graduate, he holds a master’s degree from Purdue University and has worked as a researcher, entrepreneur, manager, and executive, mostly in service of the civil and military aviation communities. Hayden has served his alma mater as a class agent, president of the NU Boston Club, president of the NU Alumni Association, university trustee, alumni career coach, and member of the Engineering Advisory Committee and is a two-star general in the Partridge Society.