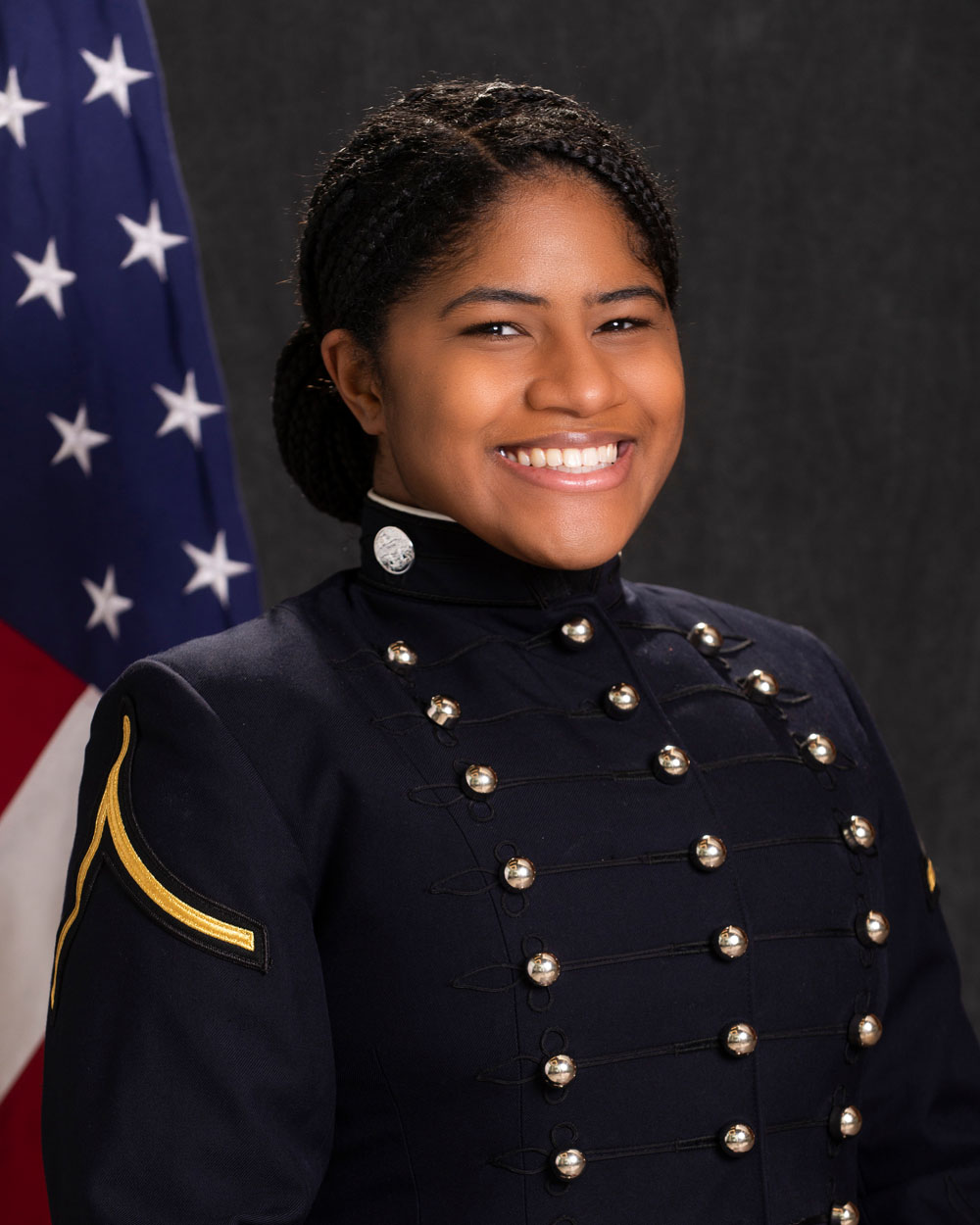 The Black Student Union president reflects on her Samoan heritage, what she’s learned in the Corps, and why giving back matters

You grew up in a Samoan American family. What does that heritage mean to you?
It’s the sense of family first. In Samoan culture, family is very important. I talk to my family all the time. I call them. I’ll probably call my mom after this interview. But I think for me, it’s having that sense of community. When you see another Samoan, you’re immediately going to go up to them and give them hugs and kisses and say, “Oh my goodness! How are you?” Even if you’ve never met them before, because it’s a small island, so you know somebody in their family. It’s the effect of warmth and home and comfort. It’s also why I’m so interested in giving back to the community, because it’s always been ingrained in me to help out and to be loving and to be caring. I feel like that part of me, the empath I guess in me, came from being so included into the Samoan culture in the community. So yeah, definitely a big role.

Does your middle name have a story?
My full name means, “The enlightened one from the sun that rises in the east and sets in the west.” My mom wanted to give me a taupou name. She is a taupou, the daughter of a chief in the village. So it’s basically a strong warrior name. You see it a lot in Samoan culture, where kids will have very, very long names. It’s because their families want them to have distinguished, very strong names. It’s like when you hear princes’ names from England. It’s kind of like that, but in a Samoan way.

Why did you choose Norwich?
I was a Navy brat growing up. My mom was a U.S. Navy meteorologist, and my dad was a cop, he was military police. I applied on a whim. My mom fell in love with the place, and I loved the place, too. The structure was really important to me. Having a structured lifestyle made a lot of sense. It makes it much easier on my part having things to do and making sure I’m on my p’s and q’s. It helped me not fall into bad habits. (I felt) the Corps of Cadets would be the best way for me. Sophomore year, I decided to become a private, because I wanted to focus mostly on my studies.

What do you think you bring to the Norwich community?
My main contribution would be the Black Student Union. It started in 2019, my sophomore year. I was really interested in joining the Black Student Union, and I always knew I wanted to be president of it. There’s a lot of talk about diversity and inclusion, and I see a lot of action. I see that they’re trying, but I don’t believe we’re there yet. I believe that the Black Student Union is just a way to create a safe space for Black students. It also connects minority students to a lot of things on campus that they weren’t aware of, services that aren’t really advertised as much.

Is it important for other students to see a role model like yourself?
I believe that representation is very important in every aspect of life. Even if it’s not with me, but just another strong Black or mixed-race female on this campus. It’s very important to see their faces and to hear their stories. Because there are a lot of people like us out there, who may not have as much encouragement as I do or don’t have strong role models to look up to. It’s important to be able to see their faces or hear their stories and think, “I can relate to that. I grew up the same way, or my family’s the same way.” It makes it that much easier to gain confidence in yourself and to gain confidence to say, “I can be that as well.”

What did your Norwich experience teach you?
I think the main thing I learned here was I learned about myself. I learned that I’m much stronger than I believe I am. It’s hard being a minority in a primarily white institution. It’s hard in many aspects, having to explain who you are as a person or why some things are the way they are. I gained a lot of confidence in myself. I learned that I’m able to do a lot of things I never thought I’d be able to do. The person I was four years ago doesn’t exist anymore. She’s a much more mature, much stronger person and much more assertive in herself. She isn’t as scared or likely to back down as much. I don’t think four years ago I would’ve been this person if I wasn’t here at Norwich.

What are you plans after graduation?
I’m hoping to get into social work. I won’t be going to straight to grad school. I kind of want to dip my toe into the pool of working and making sure that I’m really committed to being a social worker before … getting a degree for it. I’ve always been very much into giving back, I suppose, and helping those who are less fortunate. When I was younger, my mom and I didn’t have much after my parents divorced. Since then, I’ve been really big on community service and giving back. I thought it’d be great to have a career centered around helping people.

During high school, Lusia Aveolelaeosomaiilematasaua Cole ’22 earned an associate’s degree and served on the Anne Arundel County (Maryland) Board of Education.