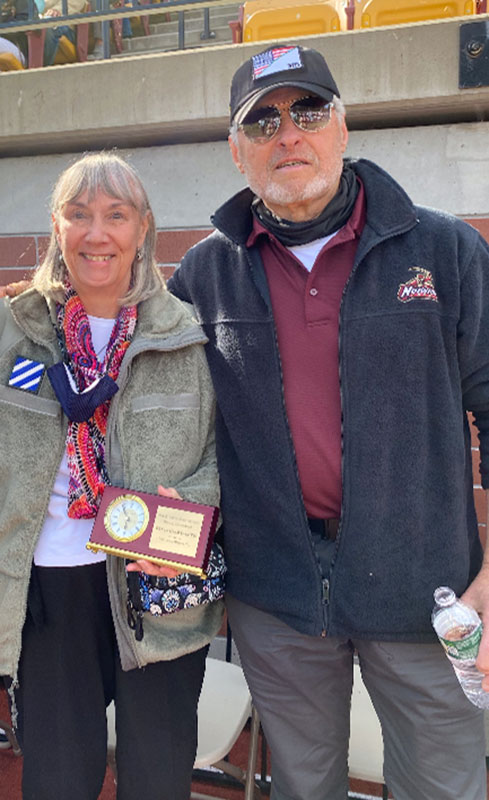 Robert (“Bob”) MacDonald was cruising down Boston’s Southeast Expressway one afternoon two years ago when a fellow motorist overtook his white Dodge Ram and showed him her finger. Like any self-respecting Bostonian, MacDonald returned the gesture. But there’s a twist:

The other driver was Vice President for Development and Alumni Relations Liz Kennedy ’01 and the finger in question, hers, bore a NUCC class ring. “I noticed the prominent Norwich branding on [Bob’s] truck and figured it had to be a fellow staff member,” Kennedy explains. “I held up my hand on my way by so he could see my Norwich ring.” Not a week later, a window-sized maroon-and-gold decal just like Bob’s was sitting on her desk.

This is typical M.O. for the 80-year-old Vietnam-era veteran from the 82nd Combat Engineers. Together with his wife of 48 years, Lou-Ellen (Rochow), Bob harbors an unabashed enthusiasm for Norwich that dates to 2002—when the couple’s youngest son Brendan was a rook and budding athlete. After Brendan’s unexpected passing in April 2003, the MacDonalds could have left the Hill behind. Instead, they intensified their commitment.

“Norwich was one of the best things that ever happened to Bren,” Lou-Ellen says. “He loved everything about it, from the Corps of Cadets to playing on the lacrosse team. We wanted other students to experience the same joy and opportunities he had.”

The following year, Bob and Lou-Ellen established the Brendan MacDonald Memorial Scholarship, awarded annually to a sophomore, junior, or senior member of India Company with demonstrated financial need. They generously support the Brendan T. MacDonald ’06 Memorial Alumni Game, held each fall to benefit NU’s lacrosse team. On more than one occasion, Bob has skydived into the Jack Abare ’57 Rook Dining Out event, his Norwich-themed parachute emblazoning the sky. And the duo continues to dedicate their time and talents to campus-related causes and events too numerous to count.

“If I don’t give the MacDonalds things to do,” Kennedy says, “Bob will make something up on his own.”

He demurs: “Well, more people do more things for Norwich than we do.”

That may be true. But Bob is likely the only one to repeatedly jump out of an air¬plane to raise money for the university.

Every five years since his 65th birth¬day—the year his son Brendan would have graduated—Bob completes a mission at Skydive Pepperell Airport in Massachusetts, where he bases his sport. In a single day, he makes as many jumps as his age, backed by pledges of a dollar or more for each jump. By last summer, when he completed his “80/80 Challenge” on August 7, Bob had cumulatively raised thousands for NU’s lacrosse team.

“He can’t sit still,” his wife Lou-Ellen quips. Over the years, Bob has served as a Boy Scout leader and Little League coach for the couple’s three sons; volunteered with the Massachusetts-based conservation nonprofit The Lincoln Institute of Land Policy; actively participated in his local Norwood, Mass., men’s club; and always found time to squeeze in enough jumps to maintain his skydiving license. All this, Lou-Ellen points out, while working six days a week as owner and president of Unlimited Specialties, Inc., a supplier for commercial construction projects for the past 48 years.

For her part, Lou-Ellen prefers not to claim the spotlight—despite her own many accomplishments. After graduating with an English degree, Lou-Ellen earned a second degree in biology (her first love) in night school while working for a pharmaceutical company. She returned to college yet again to train as a physician assistant once their three children were grown. “She’s the brains behind my brawn,” Bob says. “Always has been.” She also has more than her fair share of guts—the couple met as members of the same skydiving community.

While Lou-Ellen no longer jumps, her on-the-ground influence remains unmis¬takable to anyone who knows the MacDonalds’ philanthropy. She says she and Bob have developed “wonderful relationships” with students, their parents, faculty, and staff that remain intact year after year. “They care about us, and we care about them,” Lou-Ellen adds. “That’s what it means to be a Norwich family.”

In the future, Bob plans to visit Normandy, France, for a D-Day anniversary commemoration as a member of the Liberty Jump Team (LJT), a Texas-based organization that preserves the memory of WWII veterans with military-style para¬chute demonstrations at commemorative events in the U.S. and Europe.

Two years ago, an instructor at Skydive Pepperell introduced Bob to the founder of LJT and encouraged him to apply. After completing a refresher course in Texas and a barrage of medical tests, Bob earned his spot. Re-enacting D-Day is now a buck¬et-list goal that will be all the more special thanks to Kyle Rogers ’07, one of Bob’s LJT teammates.

A former NU lacrosse player, Kyle had been wounded during a helicopter insertion in Afghanistan. During that mission, he had been wearing Brendan’s T-shirt and— for reasons he can’t explain—escaped what should have been a catastrophic injury.

This summer, Bob and Kyle hope to jump together: to honor the troops who went before and the cadet they’ll never forget.