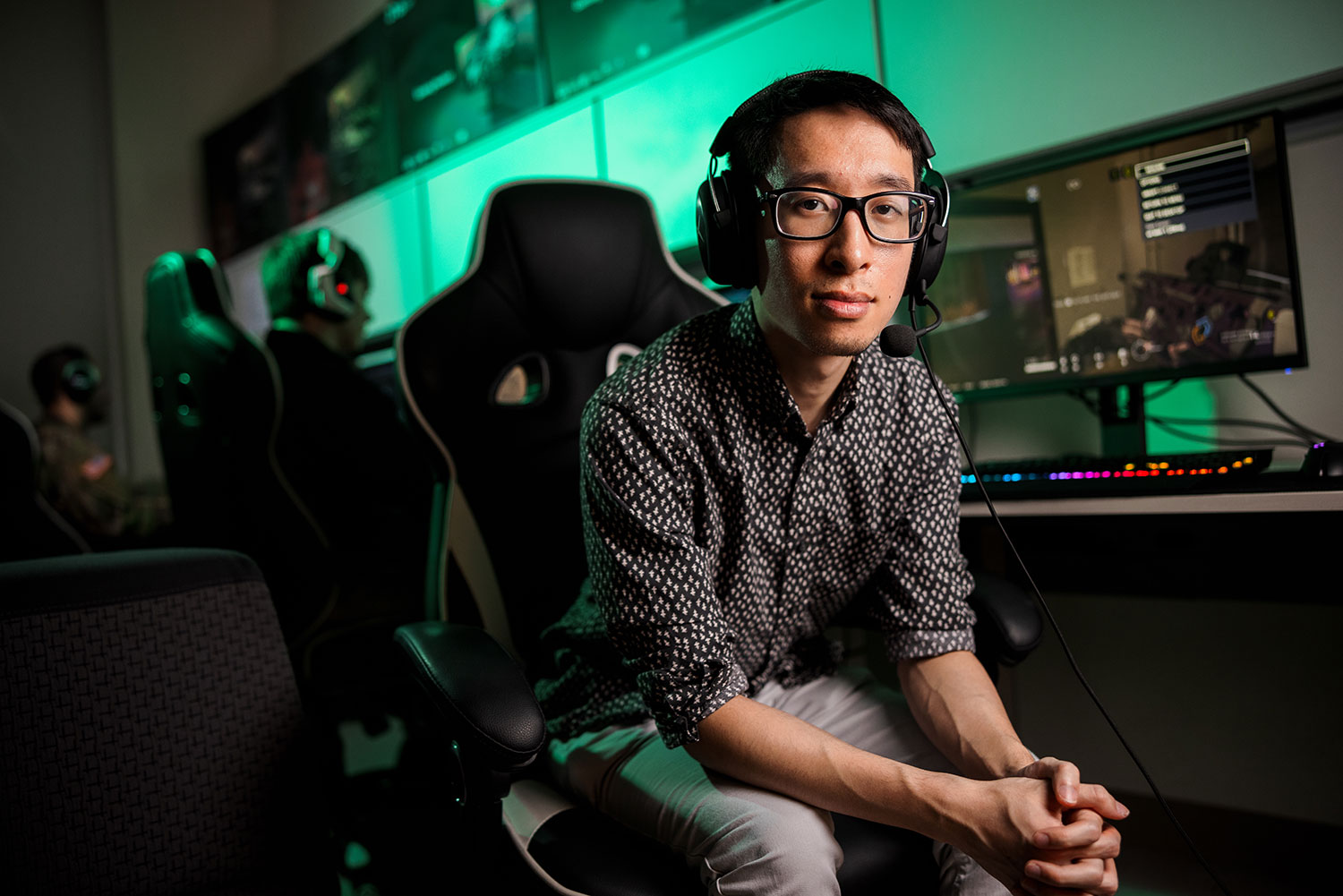 Inside the burgeoning world of Cadets esports

It’s a Friday night in early November and five starters on NU’s varsity Rainbow Six Siege team are warming up for an 8:30 p.m. match against the University of Central Florida. In the Esports Room in Mack Hall, co-captains Brennden Le ’22 and Noah Hamilton ’23 join teammates Andy Liriano ’25, James Tate ’24, and Matthew Flores ’25 at a phalanx of kaleidoscopic gaming PCs. On edge in ergonomic seats, the players lean into their screens, frantically clicking keyboards and computer mice as all hell breaks loose.

Hamilton: “I hear a drone!”

Hamilton: “What just blew up?”

Hamilton: “They’re getting ready to clear me!”

Fast and frantic, the action splits across five screens. Tate calls up a surveillance camera in the “jacuzzi room” of the three-story industrial building/Bond-on-a-budget dream fort, which the Cadets are defending.

“Swamp! Swamp! Swamp! Right now!” Hamilton urges. “Drop below and fight the garage — you’ve got to make something hap-pen!”

Swiveling over gun sights, the outlandishly armed Special Forces-style fantasy team hold positions or press ahead. As the game clock ticks down the round’s final seconds, Le is the last man standing against three oposing players. He prevents them from defusing a bomb to win the round. “Nice!” teammates shout as the game clock expires.

“That was so good. Good s--t!” Hamilton says. “That was a really nice clutch!”

Established just three years ago, interest in NU’s esports program continues to soar. “It keeps getting bigger,” says founder Dr. Jeremy Hansen, an associate professor of computer science and lifelong gamer. Working with Greg Matthews, NU’s vice president of enrollment management, the two have shepherded the growth of NU esports to its current roster of 86 players, who compete on varsity and junior varsity “A” and “B” teams across seven games: Rainbow Six Siege, Counter-Strike: Global Offensive, Overwatch, Valorant, Apex Legends, Rocket League, and League of Legends.

NU scrimmages and matches stream every day of the week on Twitch, the popular Amazon-owned live gaming streaming service.

“Esports is very quickly becoming a bigger thing than conventional sports,” Hansen says. Viewership in the U.S. has now surpassed that of every professional sports league barring professional football, from Major League Baseball to the National Basketball Association.

Expanding into esports has been a savvy business move for college admissions programs. Teams and games offer a ready-made platform to recruit and retain students and engage in peer-to-peer marketing. At NU, the Admissions Office offers esports player scholarships of $500 (JV) and $1,500 (varsity) per semester to play for the Cadets.

Matt Brooks ’25, a first-year mechanical engineering major from Grand Isle, Vermont, captains NU’s Rocket League B team. Brooks, who hopes to commission into the Air Force, says he chose Norwich for its ROTC programs and engineering school. But the chance to play his favorite esport was an added bonus. “When I found out I could play esports, I [was] like, that’s amazing! I get paid to play video games —what more can I ask for, right?”

As team captain, the rook can practice leadership skills with older Corps of Cadets teammates who outrank him off the field. “It’s a good thing to have the ability to switch on and off like that on a dime,” Brooks says. “It shows professionalism.”

Supporters cite other benefits, too. Hansen says the anecdotal evidence suggests esports is a boon for student retention. In the program’s three-year history, he says, very few players have left Norwich. “It really has blossomed into a smaller family within the Norwich family,” Hansen says. “This really connects people.” That is especially helpful for incoming freshmen who might not be the most socially outgoing, he says. “They have a built-in cohort, some comrades and friends that they can start playing with right away.”

Esports at NU and beyond remain male-dominated. But Renata De Paiva ’23 defies the stereotype. She is one of the small but growing number of Cadets women competitors. The computer science major from Rio De Janeiro, Brazil, plays on the Rocket League (think three-on-three soccer, only with ridiculously customized cars that jump and fly) B team. For De Paiva, an honors program student currently taking 19 credit hours who also works 20 hours a week part-time, esports offers an excuse to relax. “I really enjoy it,” she says. “I’m extremely busy … . When we have practice time, I actually have time to play and that just makes me happy.” The team practices for three hours on Monday and Wednesday nights and five hours on Saturdays.

It doesn’t hurt that most of her friends play esports, too. “We’re all tech nerds,” she says.

Playing computer games while growing up inspired De Paiva’s ultimate career path. The junior says she took her first programming courses at Norwich and now plans to work as a computer scientist after graduation.

Back in the Mack Hall Esports Room, the Rainbow Six Siege team prepares for its match against the University of Central Florida. “The only way we lose this game is if we beat ourselves,” Hamilton, the team co-captain, says. “Statistically, the majority of us are better than their team.” Playing a favorite map, or scenario, the game starts and the Cadets run up the score in nearly straight rounds, winning the first match 7-1.

But the second match in the best of three contest is far tighter. Central Florida has home field advantage playing a favorite map and keeps the score neck and neck. In the end, a bold play and savvy strategy allow the Cadets to prevail in a decisive round and pull ahead 7-5, winning the match and the game 2-0.

The NU teammates whoop it up and celebrate. “I love the game,” Hamilton says. “There’s nothing like it.”