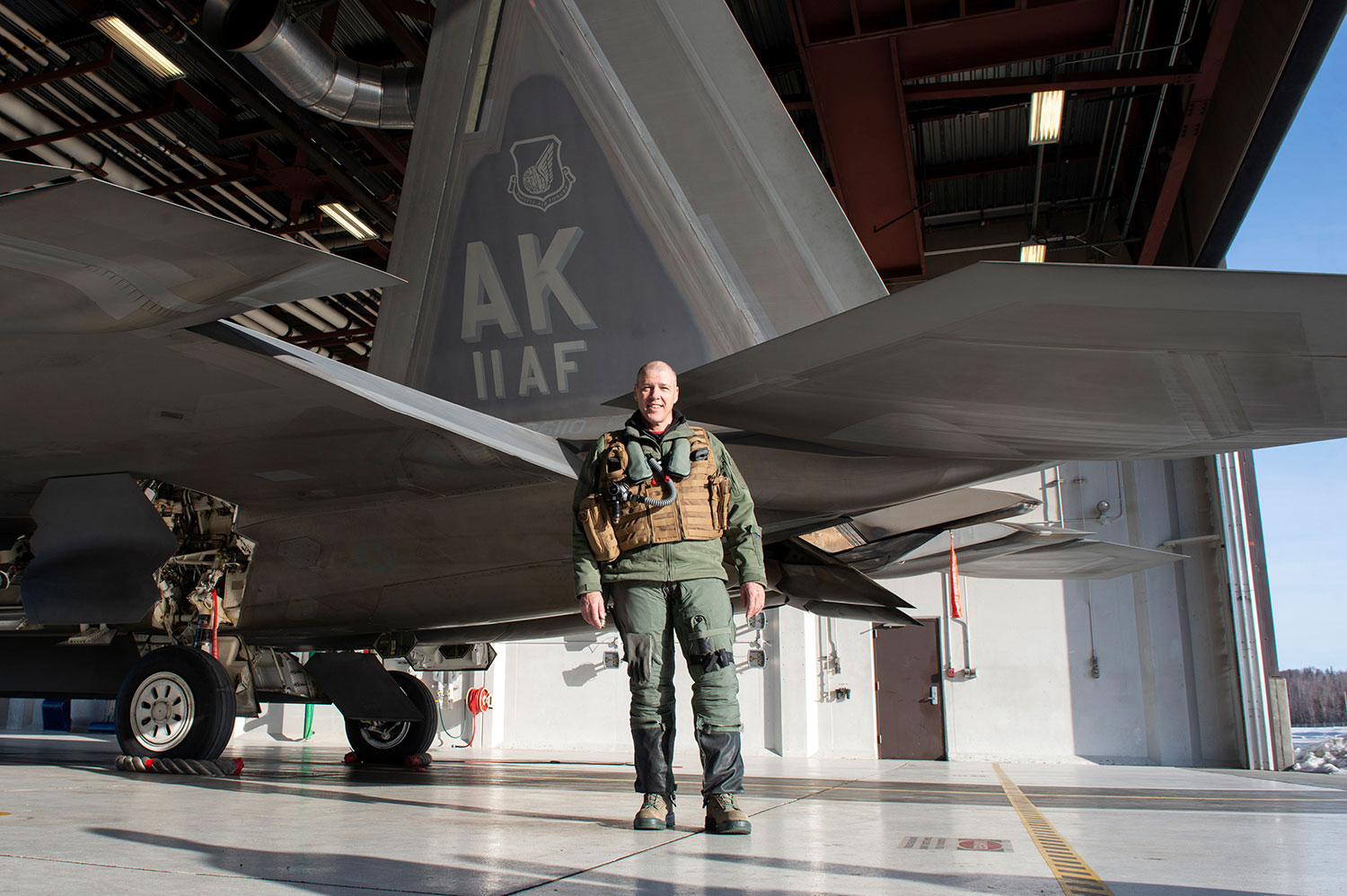 Well before college, Lt. Gen. Thomas Bussiere ’85, dreamed of becoming a military pilot. So much so that he turned down two ROTC scholarships (Army and Air Force) when he learned that neither service could guarantee a flying track after graduation. Instead, his father, who worked for a Vermont trucking company, took out a second mortgage on their family home to cover Bussiere’s tuition at Norwich. “Looking back, that probably wasn’t the wisest decision,” Bussiere says. In the end, it all worked out. Now a three-star general with 3,405 flight hours under his wings, Bussiere serves as the deputy commander of U.S. Strategic Command (USSTRATCOM) at Offutt Air Force Base, Nebraska. As its second-ranking officer, Bussiere helps oversee strategic deterrence, nuclear operations, global strike, missile defense, joint electromagnetic spectrum operations, analysis, and targeting, and missile threat assessment while serving the 150,000 soldiers, sailors, airmen, Marines, guardians, and civilians spread across the globe carrying out USSTRATCOM’s missions. During a recent two-day visit to campus, Bussiere discussed some of the nation’s most pressing security challenges.

Not long ago, you said Russia remains the primary nuclear threat when it comes to deterrence strategy but that it will soon be eclipsed by China. You added that China is accelerating its capability across many domains, including nuclear weapons. Can you elaborate?

I think most people are familiar with the Cold War. They understand that we’ve had decades of experience with strategic stability talks and various treaty regimens with the Soviet Union, now Russians. We have a very long history of that with several mechanisms for communication and dialogue — mechanisms that are designed to alleviate confusion or misunderstandings — that have been developed over the decades. I think most people are [aware] that the United States just extended the New START Treaty with Russia for another five years, that will carry us through to 2026.

From a Russia perspective, this treaty regimen, which we wholeheartedly support, does not account for all the nuclear threats that Russia is developing. It doesn’t account for over 2,000 and growing nontreaty-accountable nuclear weapons (which is publicly available information.). It also doesn’t account for what has been termed as exotic or novel systems, which are unique. It’s mind-boggling as to why they’re developing these capabilities. I challenge why they would sign a New START Treaty extension for strategic stability and then develop these weapons and expand their nontreaty accountable nuclear weapons stockpile. It’s [incongruous] with the purpose of the arms control treaty.

We have no treaty regimen with China. To date, they have been unwilling to come to the negotiation table and have a conversation. Additionally, we don’t have those decades of mechanisms to alleviate confusion and misunderstanding and such. You’ve probably seen in the open press over the last couple of months the open-source satellite discovery of a multitude of several ICBM capabilities (that China is) developing at a very rapid pace. Their glide path is pretty steep.

So the challenges we’re looking at from a U.S. Strategic Command and from a (Defense Department) perspective are, how do you develop the proper force construct? How do you develop a new multi-part deterrence theory? We have pretty unique two-body deterrence models with a lot of academic and think-tank experience over decades of thinking about how you are going to deter from a two-body perspective. Now we are dealing with a three-body (deterrence model). How do you deter two different nations that have two different leadership structures and two different international and global aspirations? And that’s going to be the challenge: How do we do that from a U.S. and allied perspective? [How do we] maintain strategic stability and convince both Russia and China without any hesitation that [they] don’t want to challenge the stability that we’ve been maintaining from a global perspective for decades now. That’s the challenge that the Command and the (Defense) Department are working on.

You’ve referenced the amount of intellectual work that will be necessary to accomplish that. Explain what you mean. Is there a need for new thinking, better thinking, something else?

There are a multitude of books from the ’60s and ’70s [produced by] think tanks [and] academic institutions that have done great theoretical work and analysis on deterrence models and how that would work vis-à-vis the Soviets and now Russians. It’s fairly well understood. That’s not the world we’re facing today. When the Cold War started, the nation approached (it) from a national perspectiv  (enlisting resources from a variety of) institutions, academia, think tanks, etc. We need that same level of intellectual curiosity and energy to approach the analysis and theoretical models to [address] the strategic stability challenges we’re going to be facing in the next few decades.

Would you say the world today is more or less secure that it has been in the past five, ten, twenty years?

I’m not sure I’d characterize it as secure or less secure. It’s definitely more challenging. The threats we see today and the threats developing in the future are going to be a challenge. Hopefully (we’ll) be able to mitigate any potential national security interests with a combination of a strong and determined Department of Defense; along with the sound, verifiable, and enforceable treaty regimens; and an international community that holds to account those who don’t follow it. I don’t think there’s one instrument of national power that’s the right answer. We use the term “whole-of-government.” This is really a whole-of-government issue. It’s not something that just the Department of Defense is going to be able to fix or address.

The New START Treaty [lasts] another roughly four and a half years. In the interim, we need to develop a framework to account for the next version of whatever [treaty] is going to follow. [One] that accounts for all the national security threats and the nations that fall into those categories. Whether it’s two bilateral or one trilateral, multilateral treaty, that should be the foundation by which we provide more global stability. That’s going to take a lot of work. A lot of both intellectual energy and time from the federal government, as well as those of our allies and partners, to be able to get the collective will of the international community to make sure it’s done.

In a recent Washington Post op-ed, Air Force Chief Gen. Charles Brown argues the Air Force faces an urgent choice: accelerate change or lose advantage to our adversaries. What do you make of that?

Gen. Brown was my boss in my last job in Alaska; one of my command hats fell under Pacific Air Forces. He’s obviously my big boss now. (His) concept of accelerate change or lose is multifaceted and specific to the Air Force. There’s a tendency to hang on to legacy weapons systems at the expense of investment opportunities in future systems. It’s not unique to the Air Force. But it’s not always as easy as a service to do when it comes to organizing for the threats we face. The Air Force has to develop a force that is not only capable today of deterring our adversaries or prevailing in a conflict but also developing the future force. The chief believes that we have to accelerate our inventory and advancement into the next generation of X — whether that’s a satellite or an aircraft or another weapons capability. There’s an equipment piece, there’s a force structure piece, and there’s a human piece of it: How do you accelerate the professional development of our airmen to be able to intellectually address the threats today and in the future? And then there’s an organization and a process piece to that, too.

Most large bureaucracies are encumbered by bureaucracy. So how do you encourage innovation within a bureaucracy that is encumbered by itself? I think every chief in the recent past has struggled with, to use the layman’s term, “the frozen middle.” You have senior leadership (at the top) that wants to move fast and innovate, and you have really talented young airmen (coming in at the bottom), and then there’s a group (sandwiched in the middle) that is not interested in change. The chief’s challenge is, how do you develop the incentives within the service to be able to accelerate that intellectual innovation and get a force that is capable of meeting the threats in the future?

Organizational change in bureaucracies is difficult. It’s not only encumbered by history and tradition; it’s encumbered by a cultural resistance to change. It’s just a really tough thing to do.

So how do you do that as a leader?

I actually have some experience with that. I [wrote] my thesis on organizational change in leadership. I had the opportunity to do the largest combat reorganization in history in Iraq, under Gen. Raymond Odierno, who very sadly passed away (in October). Then I worked on a major reorganization for Gen. Hyten, when he was USSTRATCOM commander back in 2016.

In a very abbreviated format, you have to take the organization and fully understand its mission. What is its reason for being? Distill it down to missions, functions, and tasks. Then you come up with the organizational construct to effectively achieve that. That’s the easy part. The hard part is transitioning from today to the (organization) to be, and then leading the human capital and changing the culture of an organization. That’s really the long pole in the tent in any large bureaucracy: how to institute change and make it lasting when there’s great human resistance to change in a lot of large bureaucracies. The key to that is getting the right people with the right skill sets with the right leadership in the right positions to be able to follow through. It’s very achievable. It’s just that sometimes the resistance to change is greater than the bow wave of change.

You’ve been an Air Force officer now for over 35 years. How has the job changed?

I don’t think the job has changed. I think the Air Force and the Department [of Defense] at large in my 35 years have matured to different levels based on our experiences. I think the end of the Cold War, the transition to the War on Terror, the transition now back to great power competition or near peer competition depending on how you want to approach that challenge, and then the transition into a much more diverse force, have made an exponential improvement in our capability to address threats. But just from a mechanics perspective, I don't really think I can reflect back and say that the military is dramatically different in how it operates. New weapons, new weapons systems, new people — the only thing that really (strikes me) about what’s really changed is [that] every generation gets much smarter. The talent that comes in every generation is just amazing. I’m just glad I’m old. I don’t have to compete with the new generations, because they’re amazing.

I think the long-standing, multidecade connection of Norwich grads is strong and sound. I can guarantee in the Department of Defense that Norwich graduates — officer, enlisted, civilian, Army, Air Force, Navy and Marines, and now (Space Force) Guardians — are connected and stay connected. Both from a professional development perspective and pride in our alma mater. I think most people realize that. But I just want to reaffirm the commitment to the institution. What the institution gave to everybody who serves is pretty strong.