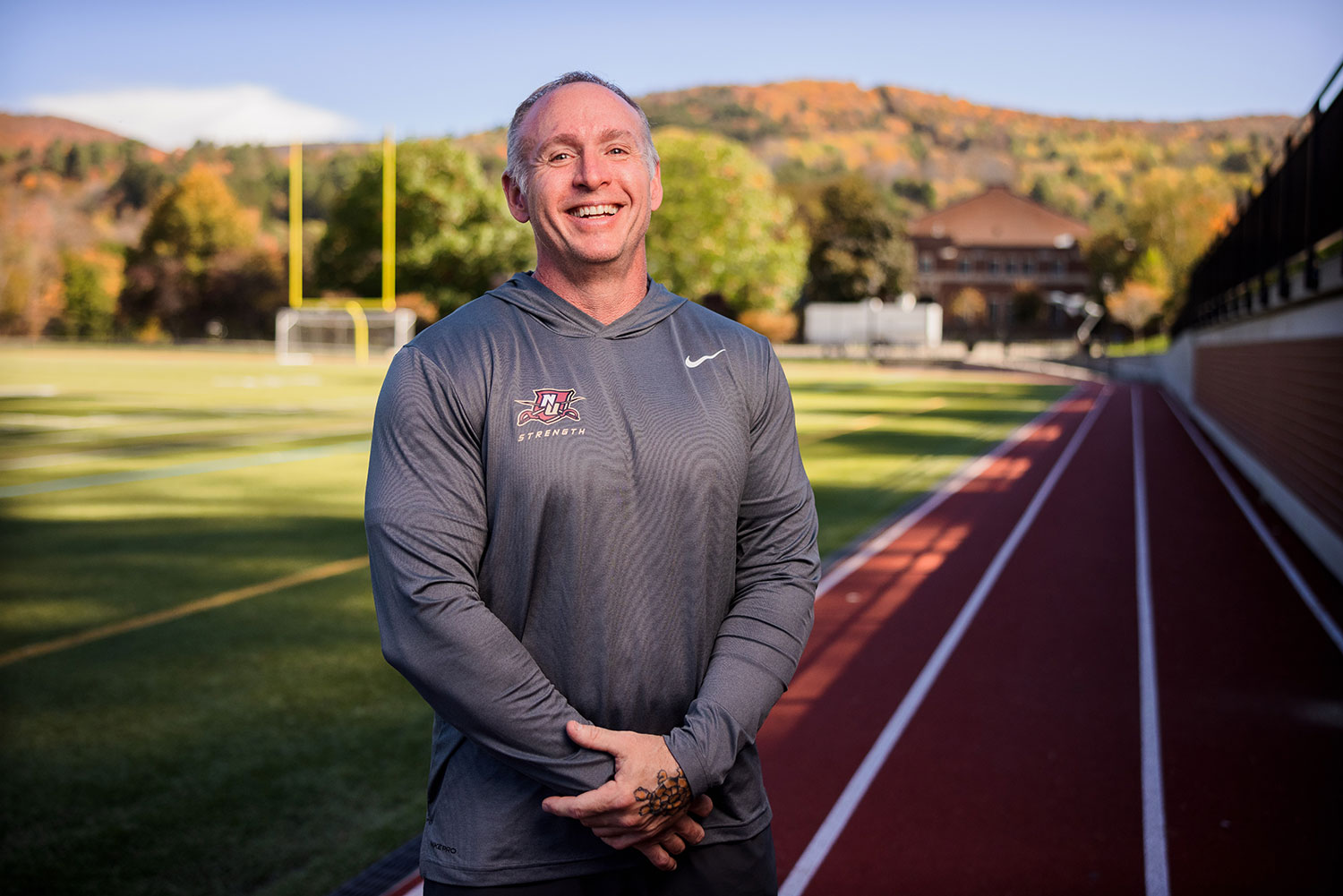 As fits go, newly arrived Strength and Condition Program Director Scott Caulfield and Norwich Athletics seem just about perfect. A central Vermont native and Navy veteran, Caulfield already had experience with Cadets athletics: His first job as a strength and conditioning coach was a part-time gig with the men’s rugby team in 2003. As a boy, he even carved turns on the NU Ski Hill.

Today, Caulfield is a nationally recognized leader in the strength and conditioning community. His social media presence as “Dr. Jacked,” a source of workout routines, technique, and endless positive motivation, also has a huge following.

Since taking the helm in August, Caulfield has invigorated Norwich’s Strength and Conditioning Program, garnering buy-in among coaching staff and some 600 varsity student-athletes from the get-go. Step into the varsity weight room in Andrews Hall on any given day and the energy in the room is palpable.

“Coach Caulfield knows how to develop people to be the best version of themselves in the weight room, which transfers onto the ice,” says Alexa Berg ’22, goalie for the women’s hockey team. She adds that Caulfield is present and committed to every weightlifting and conditioning session the team holds.

Before arriving at Norwich full time, Caulfield spent a decade with the National Strength and Conditioning Association (NSCA) in Colorado Springs, Colo., where he became a face for the organization, speaking at strength and conditioning events around the country and connecting with collegiate coaches.

At Norwich, Caulfield has already made an impact. Among his innovations is the introduction of an artificial intelligence-powered app, Volt Athletics. The intelligent training platform helps Caulfield generate visually intuitive, sport- and athlete-specific workouts tailored to each student-athlete. Real-time data and feedback help athletes optimize their workout based on their body’s condition at any given time and track progress over time.

Graduate student Scott Swanson, a men’s hockey team captain, says the app has been “a game-changer” for his team. Workouts are “well thought out and prepare us for competition on and off the ice,” he says. Swanson and his teammates use the app to stay connected and track each other’s progress even when schedule conflicts prevent them from working out together.

“Today’s student-athletes are so in tune with technology that this app is second nature to them,” Caulfield says. “I have the ability to modify a workout [and] the app’s AI can adjust the workout depending on how the individual is feeling during the set and the movement or any injuries that might be preventing them from doing that exercise.”

Other Caulfield innovations that pre¬date his arrival on the Hill include a specific variation of a preacher curl movement named the Caulfield Curl and savvy use of social media. His personal “Dr. Jacked” social media brand has more than 11,000 followers on Instagram and Twitter.

Caulfield has continued to use social media to build positive energy and culture by creating the Norwich Strength and Conditioning (@norwichsc) Instagram page, which in just a few months has already attracted nearly a 1,000 followers, many current student-athletes among them.

“For me, social media has been a way to connect and interact with more professionals,” Caulfield says. “It started with following NHL strength coaches that I admired and became a way to connect with people I didn’t know to growing pretty significantly from my time at the NSCA.”

“I also strongly believe [that] being … a good representative of the profession helps connect with the student-athletes. Social media gives them a glimpse into our lives. I’m not just here to just do a job. This is what I live for every day.”

As problems go, Caulfield’s presence and energy in the Norwich weight room this fall have created a good kind to have — too many athletes to train and not enough hours in the day. He was able to recruit Maki Shuchuk ’18, a former women’s hockey standout and member of the 2018 NCAA Division III National Championship team.

Shuchuk was brought on as a part-timer in August and elevated to full-time staff in October, after quickly developing her own strong rapport with student-athletes and teams.

“Maki is such a great fit to balance things as an assistant,” Caulfield says. “Having someone else who is not exactly like me is critical. The hype and buzz we have had is because each of us can connect with the student-athletes and teams in different ways.”

For Caulfield, a big draw in coming to Norwich was the type of students he gets to work with day to day. “The physical culture here is quite a bit higher than the average,” Caulfield says. “Many of our students do more before 6 a.m. than (others) do in their entire day. They want to be coached in the weight room, and you don’t have to tell them to do things. They just do them, because the attention to detail is engrained into them from the moment they set foot on campus.”

Caulfield says his next big goal is to work toward funding and building a multi-use athletic and recreational facility that can adequately support the entire Norwich community — from the Corps of Cadets to ROTC programs, as well as students, faculty, and staff.

It may be ambitious, but Caulfield brings experience to the job. He helped build a new weight room at Colorado College and saw that the fitness facility at NSCA headquarters was renovated.

“People are truly interested in fitness here, and we need the facilities to support that,” Caulfield says. “We want to bring Norwich to the next level and be a championship contender in all of our conferences across every sport.” Caulfield says he would also like to create and expand a graduate assistant program that leverages opportunities for NU’s health and exercise science, physical education, and athletic training programs.

Caulfield speaks highly of the support he and Shuchuk have received, not only from student-athletes, but also NU coaches.

“The culture has been supportive and not transactional,” he says. “We’re building relation¬ships with the teams and coaches because they want to have us around.”

Norwich University President Dr. Mark Anarumo describes Caulfield as a “transformative” presence on campus who has enhanced the student experience. “He is a great influence that can benefit everyone on campus and build healthier lifestyles for not only our student-athletes but also the rest of our student population and staff.”

As Caulfield says, “This is the most hours I’ve been on the floor coaching, but it’s the most fired-up and energized I’ve ever been in my career. It’s the athletes, coaches, and the whole Norwich community. I want to see where we can take it now. It’s been a such a great fit on both ends.”