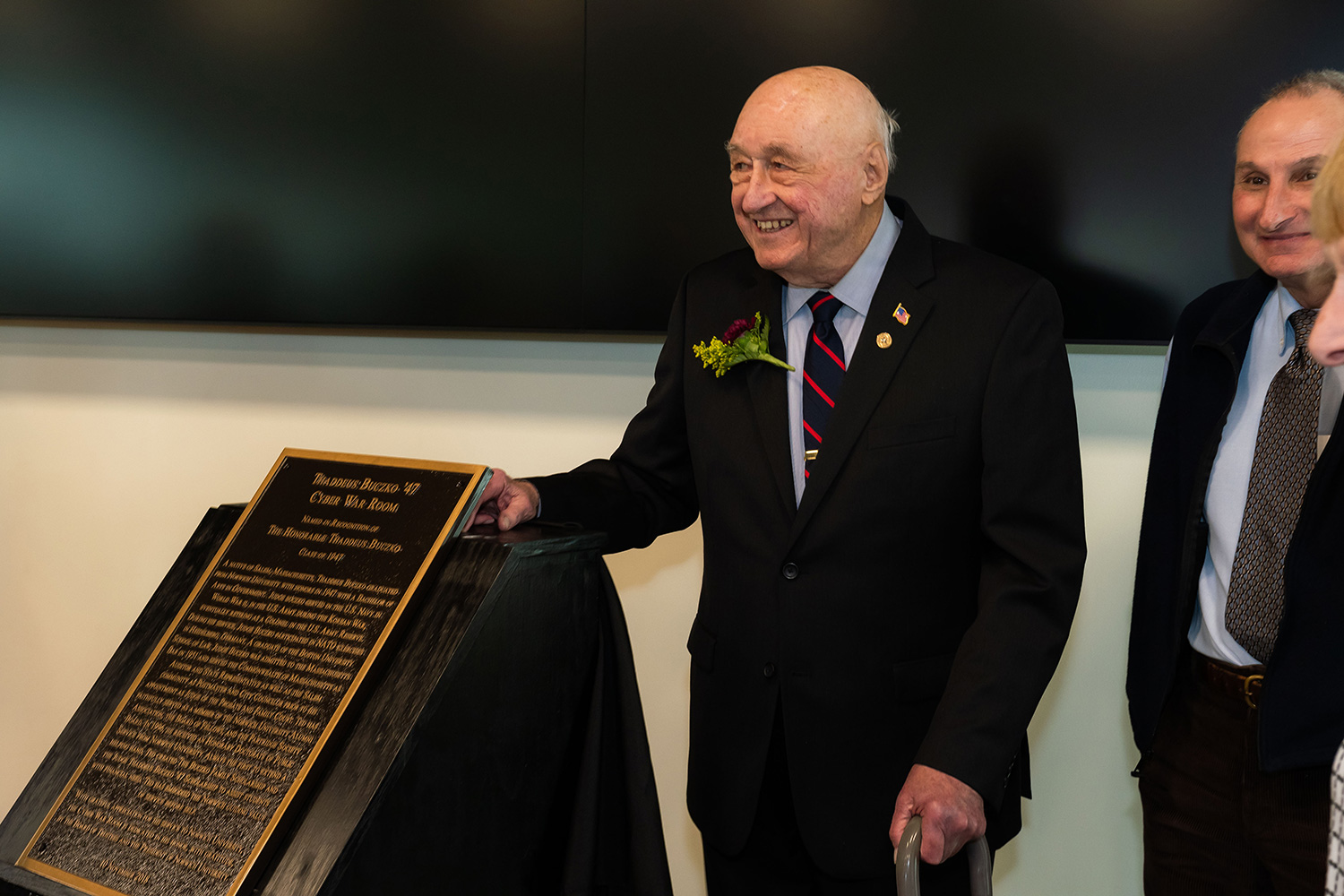 When Pamela Buczko Rapp attended her 50th high school reunion, she was approached by two classmates who want­ed to talk with her about her uncle, Thad­deus Buczko ’47. “They came up to me and said, ‘You can’t imagine what your uncle did for me,’” Rapp recalls.

That’s not the only time she has heard such a statement. “He was so humble, and I have been caught off guard so many times with what he has done for people,” she says. “I can’t even tell you what a gen­erous person he was.”

Norwich was one of the institutions that benefited from the generosity of Buczko, who passed away at age 95 in March. Over his long career of public ser­vice, the much-respected judge and World War II and Korean War veteran gifted almost $2 million to Norwich, supporting the Norwich University Military Writers’ Symposium, establishing the Buczko Fam­ily Scholarship and Judge Thaddeus Buczko ’47 Scholarship, and contributing $1.6 million in funding for the Thaddeus Buczko ’47 Cybersecurity War Room in Mack Hall.

“I think Norwich was the step­ping-stone to what he envisioned his fu­ture would be,” Rapp says. “I believe that Norwich gave him the opportunity to do what he wanted to do, and he was paying it back because he truly had fulfilled the goals he set for himself in life.”

“My uncle loved education and gave to so many educational institutions. But I know Norwich was number one.”PAMELA RAPP, NIECE OF THADDEUS BUCZKO ’47

Laurie J. LaMothe, senior philanthro­py advisor for development at Norwich, worked with Buczko on his philanthropic efforts for almost nine years. “He dedicat­ed his life to the Commonwealth of Mas­sachusetts, his college, his church, and his many nieces, nephews, great-nieces, and great-nephews,” she says. “From a Norwich perspective, he was the quintessential cit­izen-solider and lived the ethos of our in­stitution. He said God gave him a lot, and he turned about and gave it back to the people and things he loved. Norwich was second only to his family.” In 1996, Norwich recognized him with an honorary degree.

Rapp says her uncle’s work ethic and commitment to education were inspired by his hardworking Polish immigrant parents. And now his legacy will help other Norwich students achieve their own goals.

“I just think he wanted to provide an opportunity for anyone who wanted the military plus an education,” Rapp says. “He holds a very special place in my heart, and I’m so glad that other kids are going to have the opportunity to go to college through his gifts.”

“Ted was the kind of guy who makes Norwich what Norwich is about,” LaMothe says. “He was a great man, and if you can learn anything from Ted, it’s to live like he did.”