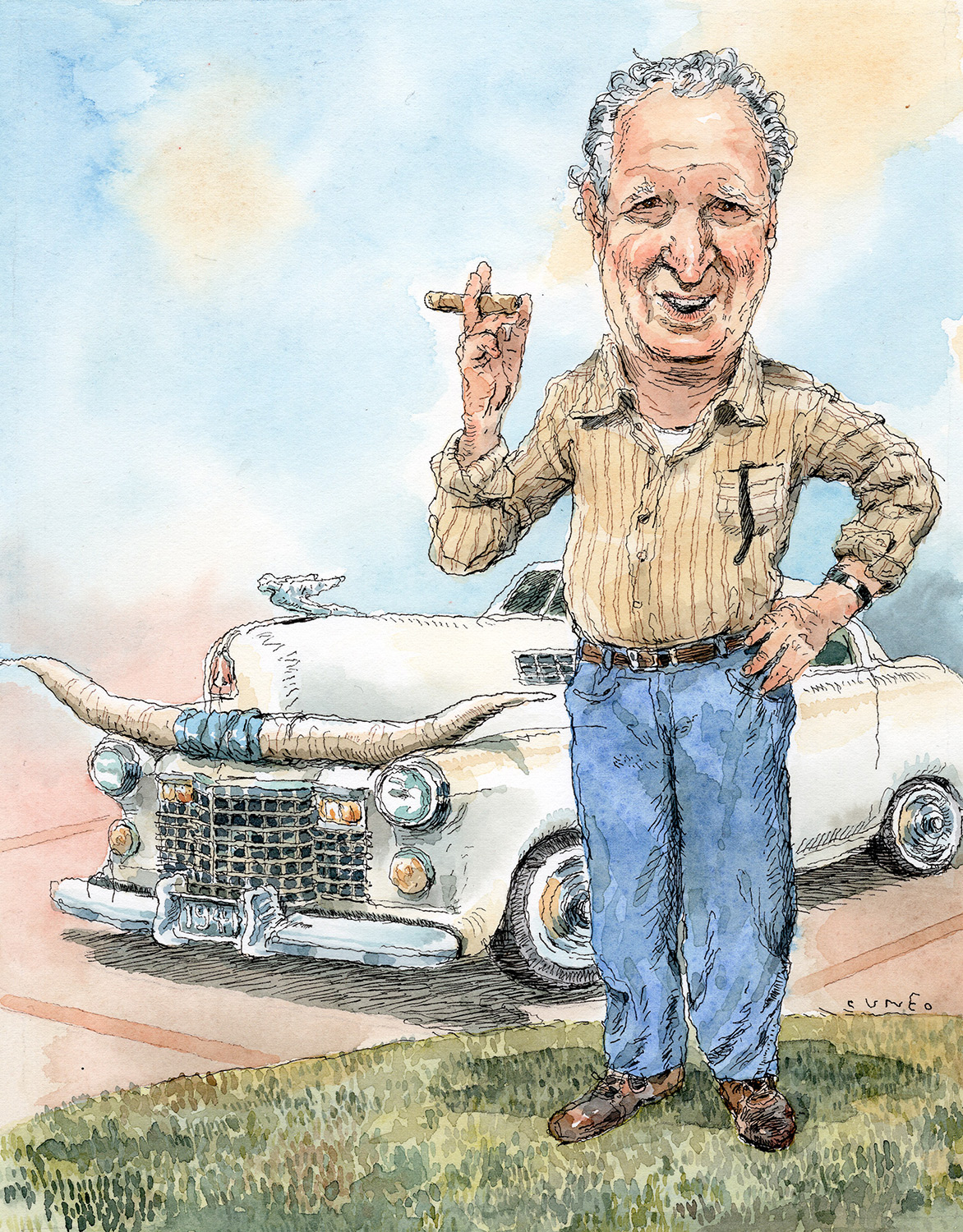 What it was like to win the $100,000 grand prize in the first Great American Race antique car rally

One day in early January 1983, as I best recall, I was eating lunch in my car in downtown Tucson. Browsing the latest issue of Autoweek magazine, I saw an announcement for an upcoming cross-country race dubbed the Great American Race. It was limited to a hundred entrants driving classic cars built in or before 1941. The racecourse looped some 2,800 miles from Buena Park, Calif., in suburban Los Angeles, to Indianapolis, Ind. To enter, teams had to pay a $5,000 entrance fee. In return, they got a shot at winning the event’s $100,000 grand prize.

When I read the announcement, my immediate thought was that old car guys were not typically rally racers. Conversely, rallyists were into sports cars, not old cars. My hunch was that there wouldn’t be too many entrants interested in both. Since I was neither a rally guy nor an old car guy, I saw this as a great opportunity.

I was 38 years old at the time. I had a new business to run, a wife, and three small kids at home. I had no business buying a “race car.” It would take time and money away from the business to prepare it. Spending five grand to enter the race and taking 10 days off from work to drive 2,800 miles across the country in search of some elusive windfall was also a risk. In retrospect, it was an endeavor best suited for some well-heeled, retired guy, not a cash-strapped, yet adventuresome, entrepreneur like me.

Nevertheless, I jumped in with both feet. I am embarrassed to say now that I sent off my application with the following note: “Here’s the winning application, tell everyone else to save their money!” I was later told that staff at race HQ laughed when they read it.

Now $5,000 poorer, I began an intense five-month push to acquire and prepare a car. I also studied the ins and outs of Sports Club Car of America rally racing, determined to win the first Great American Race.

With just five months from the date the rally was announced until it began, there was little time to prepare. Everyone had the same challenges. I hustled and quickly spotted a 1941 four-door Cadillac. It was owned by my friend Richard Schwartz, who had recently restored it cosmetically. Sporting a new silver paint job, the car was big and roomy. More importantly, it was nice and fast. I offered Richard half of my winnings if he would give me the car to enter in the race. He balked in favor of a sure sale without risk. He sold it to me instead for $5,000. It was decision he would later regret.

I had a great mechanic, Jack McGrath, who prepared the car and rode shotgun the entire race. Jack rebuilt the Cadillac’s muscular V-8 engine. He also converted the car to 12-volt and installed a 20-gallon racing fuel cell to increase driving range. Finishing touches included halogen headlights; an electric clock; and new tires, shocks, and brakes. Richard test drove the car often, ensuring that everything worked.

We followed the rules to the letter, contacting race HQ regarding all proposed changes and modifications. We also acquired spares of nearly everything we thought might break: fuel pump, cylinder heads, starter, generator, and dozens of minor parts, just in case we needed them. Some of this gear was hauled in the trunk of what we ultimately dubbed the “Cowboy Cadillac.”

Our backup crew consisted of my friend Ken Nelson and my brother Roger ’72. The guys would haul the luggage and spare parts, help with hotel arrangements, keep in touch with home base, and follow behind us in case we broke down. We got the glory. They got the cleanup work.

Before the race, I knew nothing about SCCA rallying or its rules. I didn’t even know anyone in the sport. So I checked around for rallyists. I wanted the most experienced co-pilot I could find. Two came highly recommended to me as consistent winners: Dick Eckelbarker from Tucson and Ron Hazlett from New Mexico. I interviewed both and knew afterward that it was going to be a difficult choice. (More on this later.)

At first, all the rallyists I spoke with knew nothing about the new race. But as word of the prize money quickly spread, the good rally navigators, as they are called, surfaced. A good navigator is an absolutely critical member of a successful team. To recruit the right talent, I knew that we’d need a written contract and to split any winnings.

In the ensuing months, word of the race spread around Tucson even more. I was interviewed on local TV. I reiterated my confidence, telling my interviewer that “second best would not be good enough and that we were out to win the race.” In short, I was a cocky, ambitious, brazen, overly confident competitor. I was determined to win and could not afford to lose.

Our team showed up on race day in Buena Park, just outside of Los Angeles amid much fanfare. Seeing all the competitors’ cars left me fairly overwhelmed. There were beautifully restored fire trucks, exotic sports cars, grand touring cars from the late ’20s and early ’30s, and a concours 1908 Buick owned by tire magnate Tom Lester. Its reported value was $1M. I watched that perfect brass Buick roll out of the back of Lester’s giant stainless steel, 18-wheeled tractor trailer. The car was attended to by what looked like a crew of a dozen people. The spectacle was intimidating. By comparison, we had a modest $5,000 Cadillac and the hubris to believe that we could win.

The race began in late May. It was hot traveling through the southwestern deserts via Phoenix, Tucson, and El Paso. By the end of the second day, our car was in the top three. On or near the third day, we entered the Superdome in Dallas and found ourselves in first place. It was there that I first saw the grand prize trophy. I had had less than three hours sleep since the race began, and the sight of the trophy mesmerized me. My desire to win became overpowering.

For serious competitors like us, it was a long, hard race. We usually arrived at the race leg’s stopping point after dark following an intense day of concentrated driving. Exhausted, we often had to stand for an hour or more waiting to register for our hotel room. The top finishers would later gather in the hotel lobby to see the day’s race results, often waiting past midnight. Although the days were exciting, they were by no means fun. The race was primarily a serious and arduous endeavor. It took all I could muster to endure it. The stress never ceased. The sleep deprivation weighed heavily.

Yet, there were fun moments too. Leaving Dallas, we missed our exit driving north and had to reverse almost a mile along the shoulder during morning rush hour traffic. That’s when our car’s 100-m.p.h. speed proved invaluable when we later raced over back roads to make up for our lost time.

In Oklahoma, we encountered the most intense lightning and hailstorm I have ever witnessed. Our team pushed ahead anyway, maintaining our 60-m.p.h. pace to stay ahead of the pack. The hail was so big, I was certain the windshield would breakout.

There were also festivities and cook-outs in small-town checkpoints that were required stops.

By the time we rolled into Oklahoma City, our car was in first or second place. I was feeling cocky again and bought a pair of longhorns. We attached them to the front hood of our Cowboy Cadillac, adding some real class to the car.

The final days were intense. There was a $100,000 cash prize at stake. In 1983, that was an even more substantial sum than it is today. The Billy Joel song “Pressure” comes to mind.

Near the end, we knew we were in the lead. We could win the whole thing if we didn’t mess up. When our car crossed the finish line in Indianapolis, we received a perfect score for the last leg of the race. Our total score was a mere 1:47 minutes off perfect time. The second-place car was 2:18 minutes behind. We were virtually assured of victory.

That night, there was a great party. The mayor of Indianapolis and Norm Miller, the president of Interstate Batteries, handed out trophies and checks. It was a wonderful relief for all. Receiving that $100,000 check was a spectacular experience, like hitting a jackpot. I felt very fortunate.

I knew that the rallies going forward would be far more competitive. Given my many responsibilities at home, I decided to keep my winnings and not risk competing again.

The day after the party, people were heading home. Our own team had a lot of people, equipment, and two vehicles to drive back to Tucson. I was standing in a parking lot, sorting out the race car, when Tom Lester, the tire magnate with the $1M Buick, spotted me. He had finished in seventh place, despite his spectacular car. Tom walked up and congratulated me on winning. He shared that he had been determined to win, but that I had outsmarted him. I asked what he meant. He said I was the only driver who thought to have two navigators in the back seat.

Michael Anderson ’66 is a Tucson-based real estate investor who—in keeping with his high-risk, high-reward entrepreneurial spirit shown in the Great American Race—buys 50 to 100 homes each year.