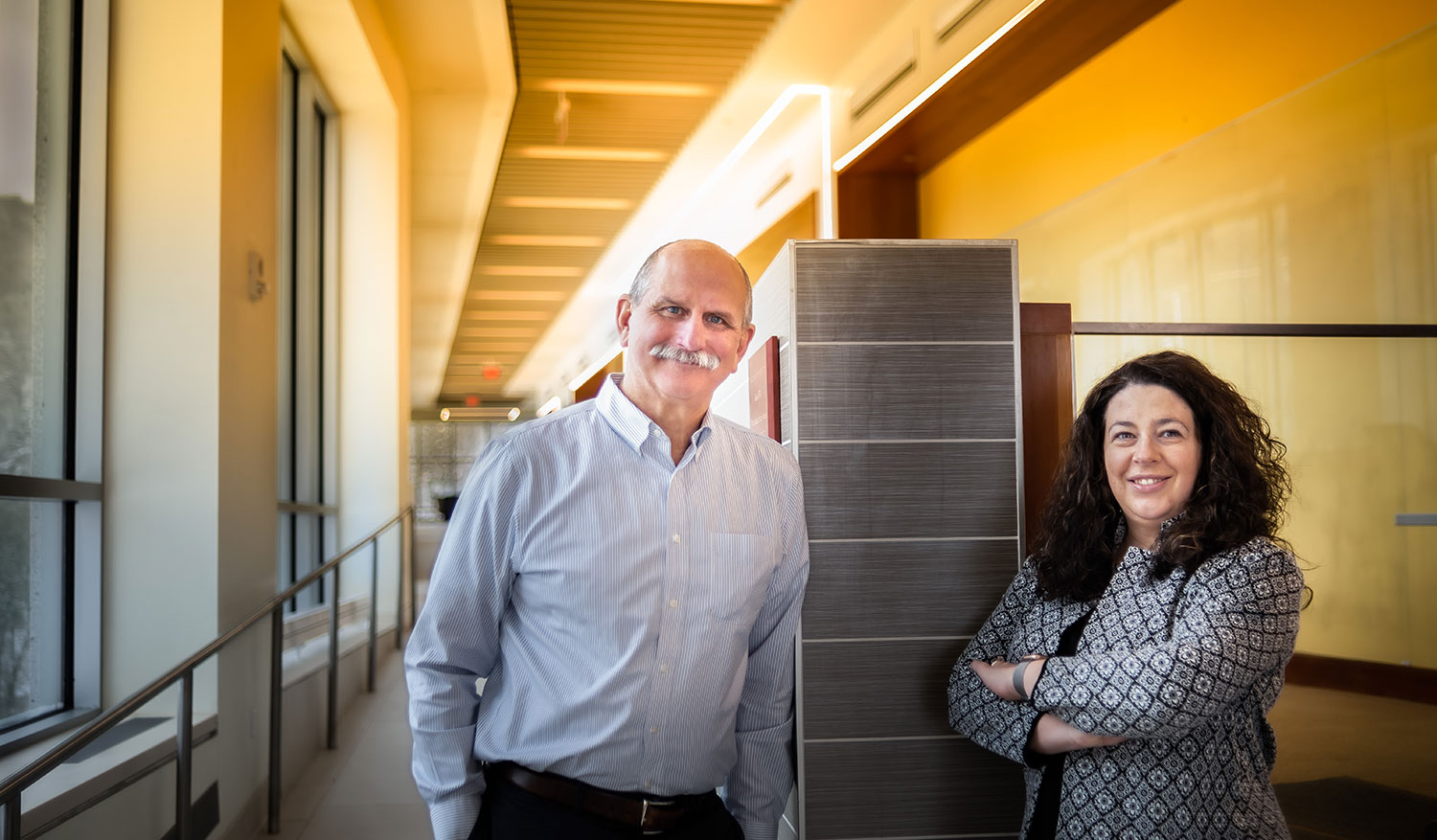 Liz Kennedy ’01 started fundraising at the tender age of seven. To her parents’ chagrin, she would sit at the end of her driveway hawking wares from her latest business ventures: lemonade, painted rocks, friendship bracelets, or other homemade crafts. Which is why she finds it impossible to say no to enterprising young Girl Scouts, who come knocking at her door each spring selling cookies. However, justifying those extra calories, even in the name of charity, was tough until Kennedy hit on a solution: She could send boxes of cookies as thank-you gifts to Norwich donors she was working with.

This is just one of the many personal touches that, together with hard work over many years, culminated in Kennedy’s promotion to vice president of development and alumni relations (DAR) last fall. It is a position her predecessor, Dave Whaley ’76, held for 23 of the 40 years and counting of his Hill career. Whaley continues to serve Norwich in a new role as executive vice president, advising President Anarumo and taking on strategic projects for the university. (Look for an upcoming profile in the magazine later this year.)

While Kennedy has big shoes to fill, she has proven herself well prepared to take on her new role. The former fundraiser for the USO, NAMI, and other organizations began her Norwich career in 2010 as a development officer, followed by stints as director of annual giving, senior director of development, and associate vice president. In every position, and by every metric, she exceeded whatever goals were assigned to her, becoming one of the development team’s top fundraisers, colleagues say.

Along the way, she earned a reputation as someone who could get things done. “My first call, when I’ve had an issue, was always to Liz,” says Jon Allen ’94, now head of global automotive practice for Amazon Web Services in Northern Virginia, who got to know Kennedy when he chaired the Board of Fellows and she was his liaison.

Like her predecessor, Kennedy shares Whaley’s bias for action in addition to a deep, abiding passion for Norwich. Both leaders are skilled at connecting with people and empowering teams. Both are excellent listeners and even better storytellers. Most important, they both know that in order to be a successful leader, you can’t go it alone: You need trusted, loyal grads from all decades to broaden your perspective and help guide you in the right direction. “This is not going to be just me making Norwich Forever,” Kennedy says. “It will take all of us, working together.”

For more than two decades, Dave Whaley spearheaded all of the “friend-raising” and fundraising efforts at Norwich, with unprecedented results. In 1981, when Whaley was hired as alumni director, there were 17 alumni clubs, roughly half of them in New England. Today there are in excess of 50 worldwide. Under his leadership, the Development and Alumni Relations staff grew from 18 to 31. In 1998, the year Whaley took over as DAR vice president, the Annual Fund raised $2.9M. In 2020, that number was $13.7M. Most impressive, he oversaw four capital campaigns, which cumulatively raised a whopping $256.8M and helped transform Norwich into a diverse, 21st-century university, fully equipped to train future generations of leaders.

Far from being daunted by Whaley’s track record, Kennedy draws inspiration from it. Almost from day one, she had her sights set on his job. “Here I am—it’s my first week, as the junior fundraiser in the office—and I say to myself, ‘I want to be that guy. Come hell or high water, I’m gonna be Dave Whaley. I am going to work hard, advocate for the importance of supporting Norwich, and not stop until I land in his seat.’”

Kennedy’s success is a testament to what she calls her grittiness. “When I was applying to colleges, I wasn’t great at anything,” she recalls. “But I knew how to bring people together, and I could get a project done.” Even though her SAT scores were terrible, she says, Norwich took a chance on her when no one else would. Over the next four years, Kennedy applied her grittiness to academics, athletics, the Corps, band—whatever she was involved in. The payback? “Norwich set the trajectory for my life.” She developed skills she would apply in her future career and met lifelong friends on the Hill, including her future husband, Logan Potskowski ’01.

The same grit that Kennedy possessed as an undergraduate is the same fire that propels her today. “We are only going to be as good as I can motivate our alumni to be,” she says. “My job is to get people brought in, to get them to see my passion and know that it’s true and that it is something worth investing in, just as I have invested, both personally and professionally.”

Lowell Price ’93, a vice president with the global pharmaceutical contract research company Evidera, is one of many alumni who have experienced Kennedy’s persuasive passion. “What was so special about Liz was that, at our very first meeting, she made me feel like the largest donor Norwich had,” he says. “You could see that that was driven by her love of the university and her genuine appreciation for the stories of others.”

Colleagues also highlight Kennedy’s vision, focus, and drive. “Over time, Liz’s desire to achieve her goals and understand all aspects of both the Alumni and Development offices became more and more apparent,” Whaley says. He notes that while Kennedy played a key role in the success of the 2015–19 Forging the Future Bicentennial campaign, “her success in building a team to exceed the goal was an even greater accomplishment.” Whaley believes Kennedy brings a fresh perspective and new energy to the DAR team. “I am grateful for her willingness to accept the torch I have passed to her.”

“Liz has worked with Dave for a long time,” says Norwich University Board of Trustees Chair Alan DeForest ’75. “She is and will be a great successor.” Alumnus Jon Allen echoes that sentiment. Kennedy is going to lead us “well into our third century,” he says. “That we have a female grad—a plank owner of the women’s hockey team—as head of Development is very fitting.”

Writer Diana Weggler is the former editor in chief of the Norwich Record. Look for her profile of Dave Whaley ’76 in the magazine later this year.