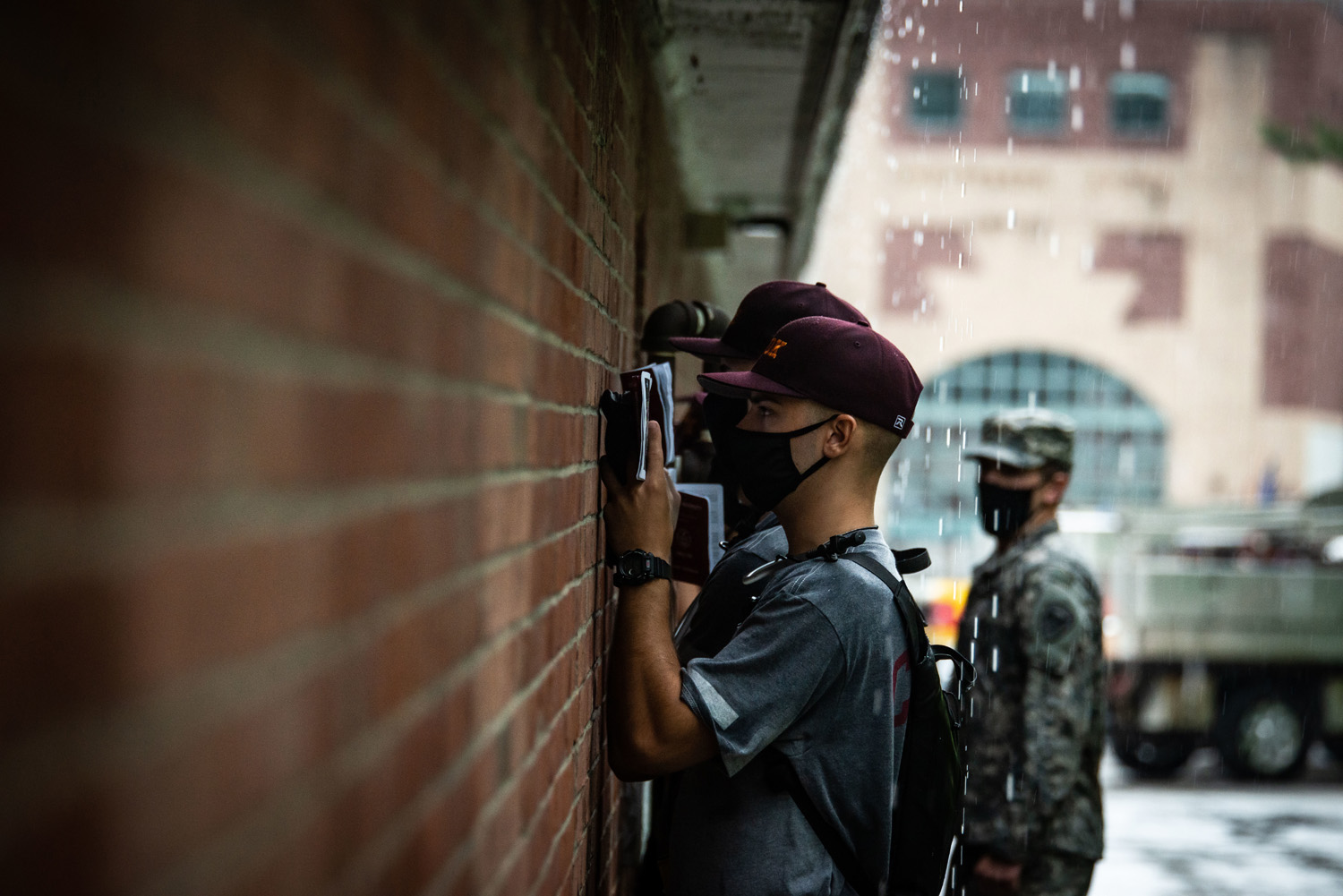 “We are men and women of honor and integrity. We shall not tolerate those who lie, cheat, or steal.” Rooks wearing masks to guard against the coronavirus but not the rain study the Cadet Handbook during Rook Week at the start of the 2020–21 academic year. Photograph by Mark Collier.

FUN FACT
All the iron in the universe was formed in exploding stars known as supernovas, notes professor and astrophysicist K. Tabitha Hole. That includes the iron in our blood.

SERVICE RECOGNITION
Former Board of Fellows Chair Jon Allen ’94, former Interim Senior Vice President for Academic Affairs and Dean of the Faculty Joe Byrne, and former professor of Electrical and Computer Engineering and director of the David Crawford School of Engineering Stephen Fitzhugh have been named Norwich’s 2020 Board of Fellows Medallion Award winners. The trio will be recognized at the 2021 Board of Fellows Medallion Dinner. “[They] all have given so much of their time, talent, and service over an extended period of time to significantly benefit Norwich,” said Board of Fellows Committee Chair Ken Johnson ’82, adding that he has worked closely with all three over the years and was thrilled to see them recognized.

SPACE FORCE
In September, NU alumnus and Air Force ROTC Detachment 867’s own Capt. James Olsen transitioned from the U.S. Air Force to the U.S. Space Force. Norwich President Mark Anarumo, who retired from the Air Force as a colonel in Au¬gust, administered the oath. Olsen, who teaches aerospace studies at Norwich, became the first and only Space Force officer stationed in Vermont.

COVID SURVEILLANCE
Led by Associate Professor of Civil and Environmental Engineering Tara Kulkarni, PhD, PE, an interdisciplinary team of students and faculty at Norwich and beyond are testing wastewater samples on campus and in the Northfield community for SARS-CoV-2, the virus that causes COVID-19. The hands-on learning project is one of a number of pilot projects underway around the U.S. to test additional ways to surveil communities for outbreaks without costly individual testing.

COOL PLAYGROUND
The Design+Build Collaborative in the College of Professional Schools earned a design excellence Merit Award from the American Institute of Architects, New England Chapter for a project to design and build NEST, an outdoor classroom/ playhouse as part of playground renovations at an elementary school in Montpelier. “The combination of inclusive dialogue and exploration to create a shared community asset is inspiring,” the jury said.

NEW JOURNAL
The John and Mary Frances Patton Peace and War Center recently published its second annual Journal of Peace and War Studies (JPWS). The scholarly journal’s latest edition addresses the escalating U.S.-China rivalry, one of the world community’s most pressing issues. In 2019, the journal analyzed North Korea’s nuclear and missile challenges from the perspectives of the United States, China, South Korea, and Japan. In August, the university received a generous gift of $1.7 million from the estate of Maj. Gen. John S. Patton, USAF (Ret) and his wife, Prof. Mary Frances M. Patton. The renamed hub serves as NU’s research center of excellence for students, scholars, and practitioners seeking to advance interdisciplinary knowledge on the local, national, and global relationship between peace and warfare.