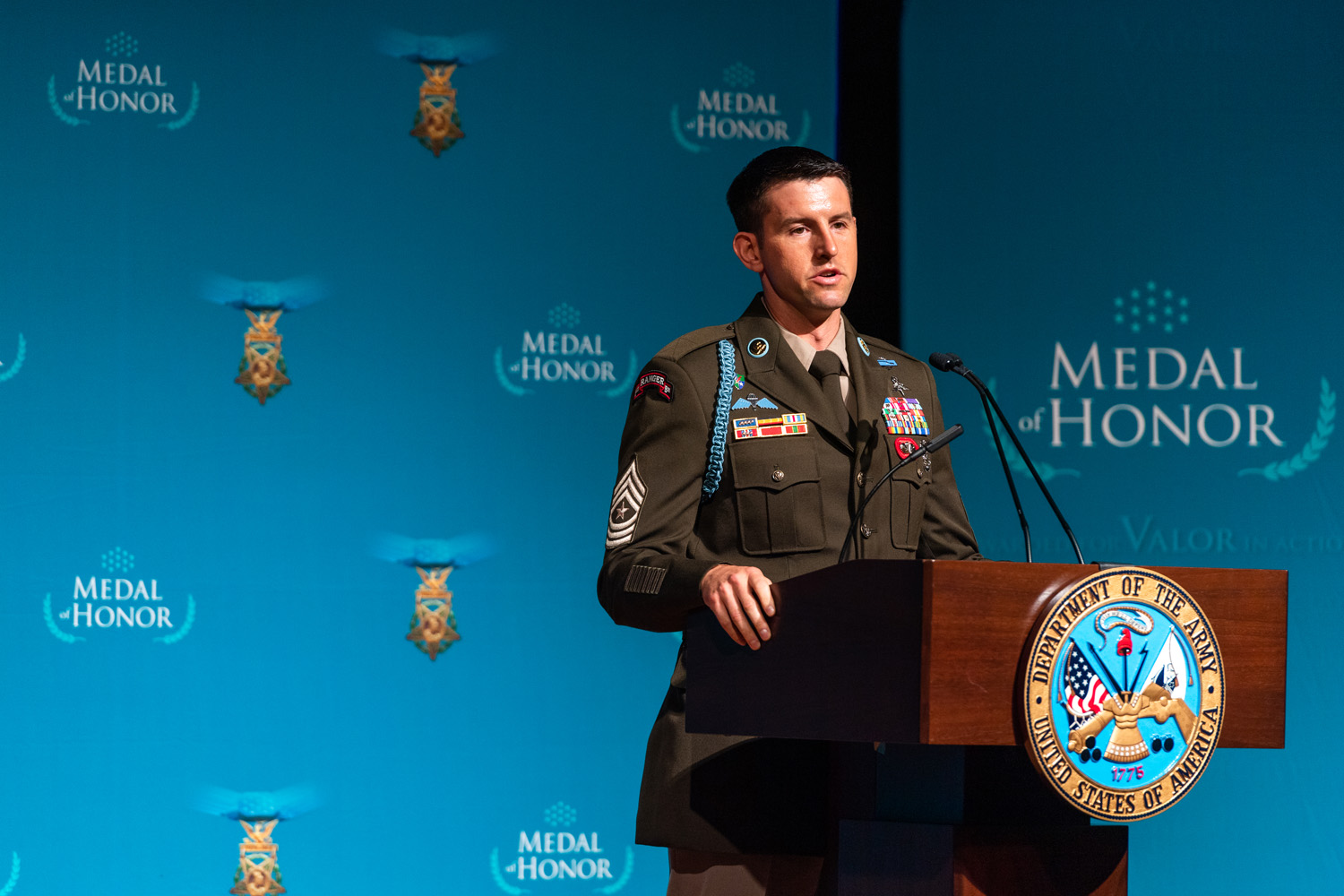 How the assistant team leader helped free 75 hostages from ISIS forces in Iraq, completing one of the largest hostage rescue operations in U.S. history

In October 2015, Army Ranger Sgt. Maj. Thomas “Patrick” Payne ’17 played an integral role in carrying out one of the largest hostage rescues in U.S. military history. Five years later, he’s now America’s most recent recipient of the Medal of Honor.

Payne was born on April 2, 1984, and grew up in Batesburg-Leesville and Lugoff, two towns on opposite sides of Columbia, South Carolina. Payne once called the area the kind of place where you hunted, fished, and played sports to stay out of trouble.

But he was also interested in service. His father was a police officer, and his brothers served in the Army and Air Force. When the Sept. 11, 2001, terrorist attacks occurred during his senior year of high school, he felt a strong urge to serve, too.

On July 25, 2002, Payne enlisted in the Army. He hoped to become a Ranger—a goal he realized after he passed the selection process about a year later.

Payne served with the 75th Ranger Regiment as a sniper until November 2007, when he was selected for assignment to Army Special Operations Command and stationed at Fort Bragg, North Carolina. Payne has served numerous roles there ever since and has deployed 17 times, including tours in Iraq, Afghanistan, and Africa.

Before he received the Medal of Honor, Payne had already made a name for himself. He was awarded the Purple Heart after a grenade blast seriously injured him during a 2010 mission in Afghanistan. The injury was debilitating, but he pushed through rehab and saw his strength return thanks to his parents and his future wife, Alison, whom he met during recovery.

Payne returned in such good condition that he won the 2012 Army Best Ranger Competition. The grueling competition pits several of the Army’s elite two-man teams against each other during 60 hours of nonstop events that push them to their physical and mental limits.

A little over three years later, Payne was serving with Combined Joint Task Force Operation Inherent Resolve in Iraq. On Oct. 22, 2015, he was part of a daring nighttime hostage rescue in the northern town of Hawija. Their mission: to free dozens of Iraqi hostages held at a prison by ISIS. Many of them were captured Iraqi security forces personnel, and the task force had learned that they were under imminent threat of execution.

When given the go order, Payne, his teammates, and several Kurdish Special Forces partners loaded onto CH-47 Chinook helicopters and were dropped at the prison, which nearly immediately erupted in battle.

Then-Sgt. 1st Class Payne was the assistant leader of a team tasked with clearing one of two buildings that housed the hostages. After scaling a wall to get into the compound, the team cleared the building quickly with minimal resistance. They then used bolt cutters to break two locks on a door to an area that held 38 hostages, who were freed and taken to safety.

Payne’s team then heard an urgent radio call from other members of the coalition who needed backup. They were involved in an intense firefight while trying to clear the second building, which was on fire.

Payne and his team didn’t hesitate to go. They scrambled about 30 yards through the gunfire-streaked compound and, while dodging bullets and avoiding flames, ran up a ladder to the second building’s roof in search of an entrance.

Payne tossed grenades and shot at the enemy fighters below, who started blowing up their suicide vests. The blasts shook the building, so Payne and his team got off the roof and continued the fight on the ground, looking for another way in.

Glancing through the building’s entryway, Payne noticed a door that had similar locks to the one he had just forced open in the other building. He knew time was running out for the hostages inside, so he quickly grabbed bolt cutters and pushed through an intense barrage of gunfire, heat, and smoke to get to the door.

Payne was able to cut through the first of two locks before smoke forced him to run back out. He handed the bolt cutters to an Iraqi coalition partner, who took over the effort. When that man needed a break for air, Payne returned to the task. He sheared off the second lock and kicked the door open.

The building was crumbling around them, so the team was ordered to evacuate. Payne, however, refused to do so until all 37 hostages inside had gotten out. He went back into the intense smoke three additional times—at one point forcing out a hostage who was too scared to move—to ensure the area was clear.

Getting away from the compound wasn’t easy. Coalition forces had to create a human wall to shield the dis¬oriented hostages from enemy fire as they moved. The rescue teams were able to cram all 75 captives onto the helicopters, making it one of the largest hostage rescues in history.

Payne was initially awarded the Distinguished Service Cross for his courage that day, but it was upgraded to the Medal of Honor. Payne, now a sergeant major, received the medal in a ceremony at the White House on Sept. 11, 2020—the anniversary of the date that compelled him to enlist so many years before. Payne graduated from Norwich in 2017 with a degree in strategic studies and defense analysis from the College of Graduate and Continuing Studies, and he continues to serve in the Army. He and his wife have three children and live at Fort Bragg, where he’s currently a special operations instructor.