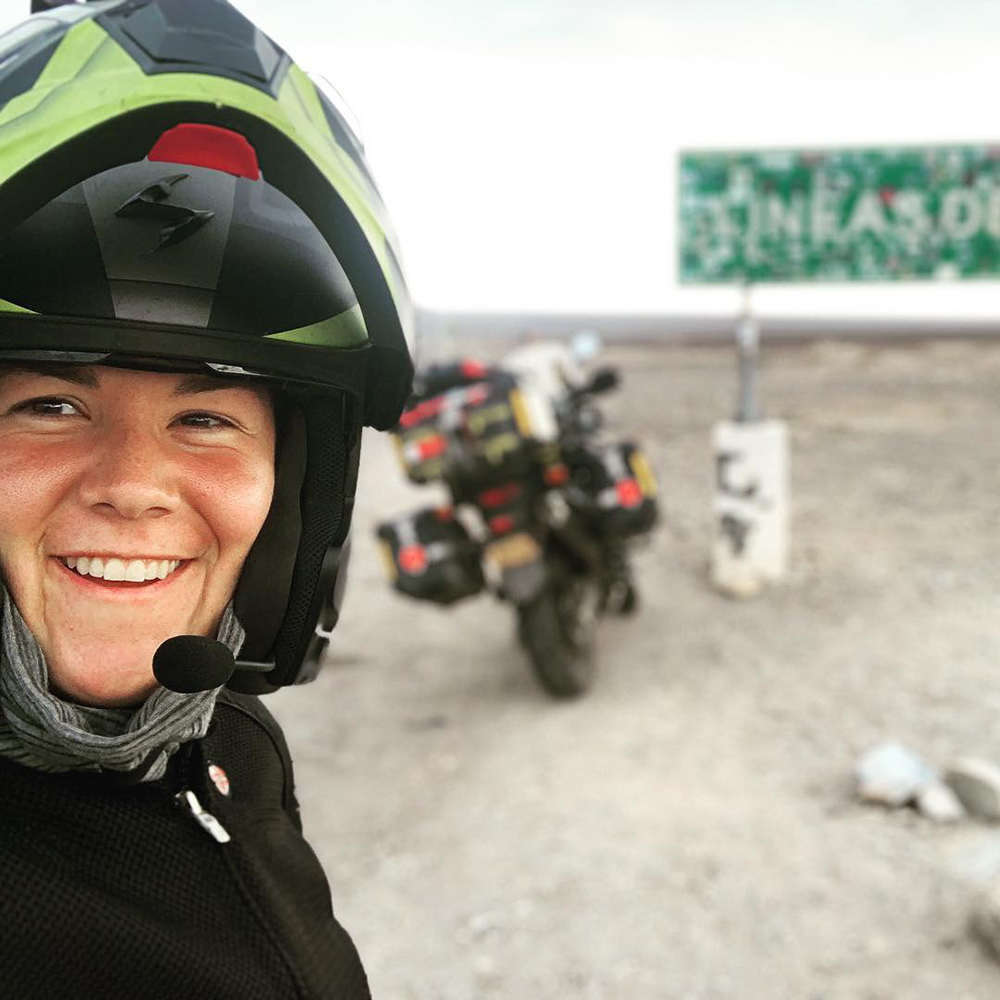 After the Army, former captain and Afghanistan veteran Alicia Seda ’11 headed south from her home in Albany, N.Y., on a used Suzuki V-Strom 650 motorcycle named Tortilla. Six months, 14 countries, four oil changes, and 20,000 miles later, she arrived in Argentina. “The only thing that didn’t make it was my riding pants.” In an email interview turned essay, Seda reflects on her trip.

The trip was to clear my head after getting out of the Army. I think I wanted to experience something just as me, not me with a name and rank. On a deployment in 2014, I read a magazine article about the Pan-American Highway that runs from North to South America. It is the longest road in the world and I never knew anything about it. I ripped out the map and hung it on the wall next to my bunk. I tried rallying a few soldiers to spend their post-deployment leave together on an epic road trip down the Pan-American. No one was interested.

Four years later, I shared the road trip dream with more veterans. I searched for a riding partner or two or three. I could not shake the idea that this type of trip required a small unit, a mechanic, medic, interpreter, and probably MREs. I asked local members of the Combat Veterans Motorcycle Association and posted ads on motorcycle forums. Ten years in the Army made these recruiting efforts seem more logical than just traveling alone.

Every message I had received in my life said I needed someone else to keep me safe. Until the night before crossing the Mexico-U.S. border, I was planning to travel with some guy named Ray who responded to my online post. Did “safety” mean externalizing my autonomy to a stranger from the internet? At 3 a.m., I texted him a brief apology and left for the border alone. We never met up.

At first, traveling solo was terrifying. I booked accommodations well in advance, was on the road at sunrise, and rode 10 hours a day to make it to major cities. I followed exactly whatever route I had mapped.

Early on, I rolled up to a desert gas station in Mexico. I felt unsafe about the two people sitting there, so I left. I did not run the decision by any headquarters. I just left. I lived the consequences of my decisions. There was no one to blame when I made a wrong turn, no one to second-guess my gut. When I needed gas, I found a gas station. When the bike broke, I fixed it. When I was hungry, I ate. I stopped pushing myself to get to the next city. I became comfortable with smaller towns and ended the day when I was tired of riding. I began to trust myself.

Meanwhile, I was particularly struck by gendered comments from friends, family, and strangers that portrayed me as naïve and careless for traveling alone. I wondered if a man would have gotten more encouragement, or at least less discouragement. My mom kept asking if I had finally met up with that guy, Ray. Military friends never stopped telling me I would be safer if I found a group, warning me unironically about sexual assault perpetrated against vulnerable women. (I was statistically less likely to be raped on a civilian1 motorcycle trip than as a female soldier2 on active duty.) This was the hardest part of my trip. I could not convince them that I understood the risks.

Traveling as a newly sober person meant I was more present with myself than I had ever been. I rode silently each day unable to escape my own thoughts. I reflected on the decade I spent becoming what I thought the Army needed me to be. In 2008, I enlisted in the National Guard under “Don’t Ask Don’t Tell.” At Norwich, even the ROTC departments forced cadets on a commissioning track to sign the Homosexual Conduct Policy. This is how I came to know myself: under a policy that said gay is “incompatible with military service.”

Throughout my career, and despite the repeal of DADT, I struggled to take myself seriously as a gay woman and as a leader in the military. The point was to be a member of a team. Calling attention to myself, to ways I was different, made me feel like an individual; it made me feel selfish. (When latrines were co-ed, blocking off a “female only” shower time for more than 30 minutes was inconsiderate to the rest of the mostly male team.) Being a female already made me stand out in the military. Being gay added one more “other” to that list. Instead, when in uniform, I perpetuated sexist and homophobic and transphobic behavior to be accepted in male spaces. I got pretty good at it. On my trip, I was able to rethink these flawed standards I was given to judge myself and others. I am building my own framework now.

For someone who leaves the military before 20 years, particularly through medical discharge, there is a lot of rhetoric about “copping out.” The fear of stigma and of starting over can prevent service members from seeking mental healthcare and making major lifestyle changes. I know the feeling of identity loss that comes with setting up a life outside of the military. But it is possible. It is difficult and confusing and I am definitely not done “figuring.” I know the most exciting, defining parts of my life were not a deployment or on a motorcycle—they are ahead of me.

Life had always felt like something that would happen as soon as I finished this deployment or got that promotion. Somewhere in Chile, I started feeling like life was happening now. Realizing that I could live with one pair of socks was also cool.

Alicia Seda ’11 majored in business management at Norwich and holds an MBA from the College of St. Rose. She served 10 years in the Army, including two tours in Afghanistan as a platoon leader and executive officer. From 2015 to 2017, she served as company commander of Charlie Company, 101st Expeditionary Signal Battalion, New York Army National Guard. She medically retired at the rank of captain. She and her partner now live in Mexico, where she says, “We rent a beautiful home together and expect to be fluent in Spanish by 2050.”