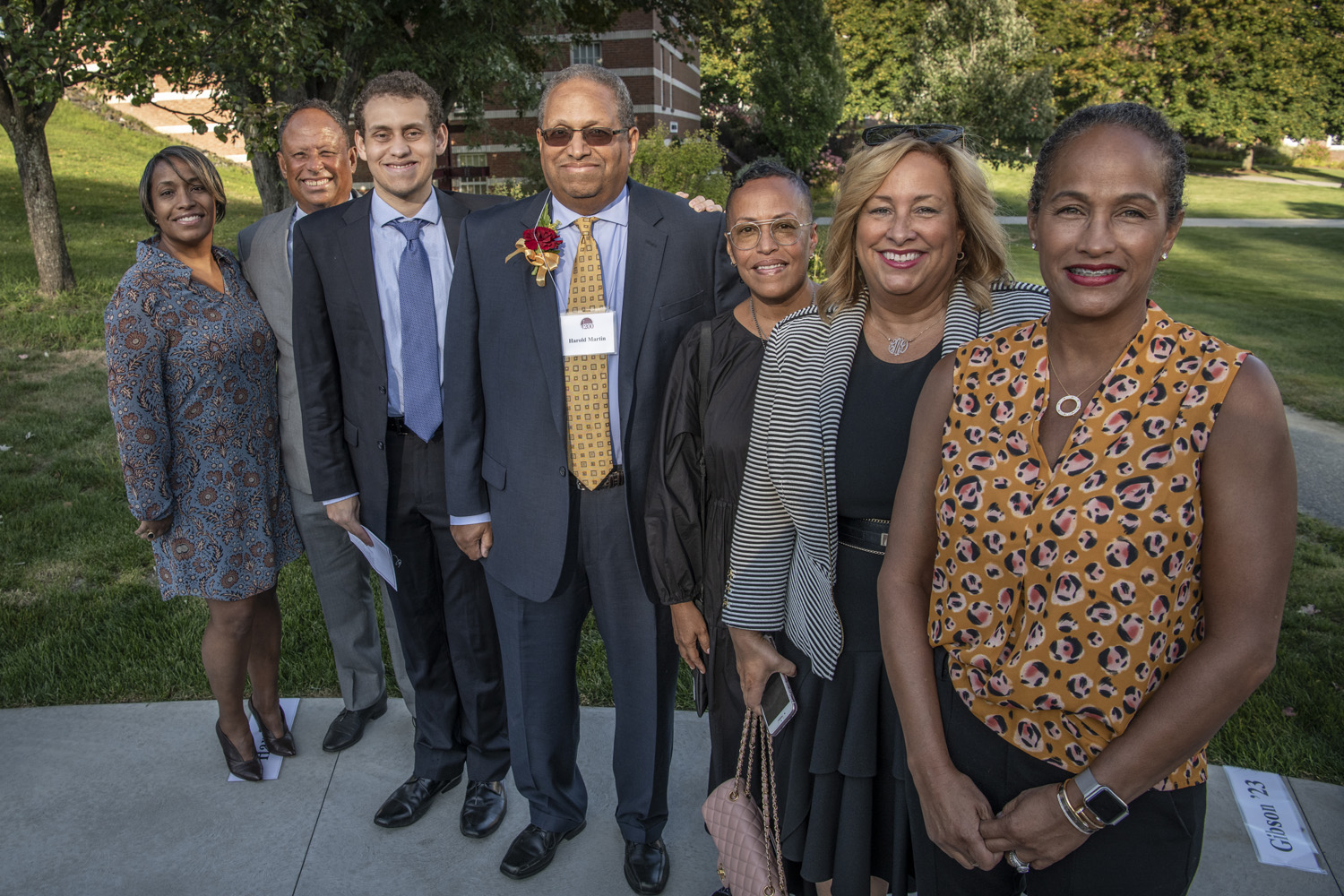 If it wasn’t for Harold “Doc” Martin, Maj. Gen. Cedric George ’87 USAF, (Ret) doesn’t know if he would have attended Norwich. “In many ways, he paved the way for me to be recognized as Norwich’s first African-American regimental commander,” says George, who recently retired from the Air Force after 32 years and now serves as a director of strategic business development for Amazon Web Services. “We have so many parallels, but he had no idea a Cedric George would be coming along behind him 70 years later.”

A graduate of the Class of 1920, Martin was Norwich’s first African-American cadet. He studied electrical engineering and was the star of the varsity football team. After graduation, he worked at an electric company in Pittsburgh, pitched for two Negro League baseball teams, coached in college sports programs, and earned a master’s degree in physical education from New York University. During World War II, Martin was stationed at Tuskegee Army Airfield. He lost his life in an aircraft crash in 1945.

To honor his pioneering legacy and to help ensure that Norwich continues to offer a diverse learning environment, five African-American Norwich alumni have joined forces to found a scholarship in Martin’s name. The goal is to provide support and resources for minority students. George and his fellow organizers say Martin’s trailblazing impact on their own Norwich experiences inspired them to get involved in creating the scholarship.

“Norwich took a chance on me, just like it took a chance on Harold ‘Doc’ Martin a long time ago,” says Lowell Price ’93, vice president and global head of commercial at Evidera PPD, a contract research organization. “That really brought me into a community that not only helped me grow academically but personally as well. And I think there are a lot of people like me who should have the opportunities I benefited from. There are many students out there desiring a Norwich education. But it simply isn’t possible for them. This scholarship is one way to help ease that burden and open up the door to possibilities that can impact a student’s life in ways we may not even realize.”

Tony Johnson ’94 remembers walking past the portraits of Harold “Doc” Martin and NUCC Regimental Commander Cedric George in Jackman Hall while a student at Norwich. “Those pictures were inspirational to me, because they were singular on that wall of monochromatic faces,” says Johnson, a defense and policy strategist at the Institute for Defense Analyses. “They were the two standouts that looked like me. That made me more hopeful in the sense that if they [could] do it, I [could] do it. So I wanted to do something for the students who are like me and who need a little bit of extra help and encouragement and support.”

The scholarship’s five founding alumni—who also include Tonya Thorne ’94 and Willie Wright ’93—provided $50,000 in seed money for the Harold “Doc” Martin scholarship. Now the goal is to grow that scholarship funding so that it can help as many students as possible.

“We need every friend of Norwich, every alumnus, and everyone associated with our great Norwich family to understand that we can’t miss any talent that’s out there,” George says. “Here’s an opportunity for us to celebrate how proud we are of our university for saying yes to Harold ‘Doc’ Martin at a time when the nation was saying no to people of color. We need to make sure that any student qualified to enroll in Norwich, particularly those from underrepresented communities, [isn’t] … forced to leave Norwich because they can’t afford it.”

A more diverse Norwich campus benefits everyone, and the new scholarship comes at an important moment in our nation’s history. “At this really unique and somewhat dis¬quieting time, we have an opportunity to demonstrate that Norwich really is committed to the ideals of the citizen-soldier,” Johnson says. “And it’s important that the people in public service are representative of the country. Not just by the numbers only, but in the real, substantive ways that we develop and train the future leaders of America.”

“Leaders must be prepared to lead a diverse group of young builders and leaders no matter where the nation calls them,” George says. “And there’s no better place to learn that than in the leadership lab called Norwich University. But if students learn in an environment that doesn’t look like what they’re going to experience when they get into the real world, they will be leading from behind. We cannot let that happen, because the problems are too complex. They must be ready to lead from day one.”

For more information on the Harold “Doc” Martin Scholarship, see alumni.norwich.edu/docmartinscholarship or contact Billy Whaley ’17, Assistant Director of Class Giving at This email address is being protected from spambots. You need JavaScript enabled to view it. or (802) 485-2674.