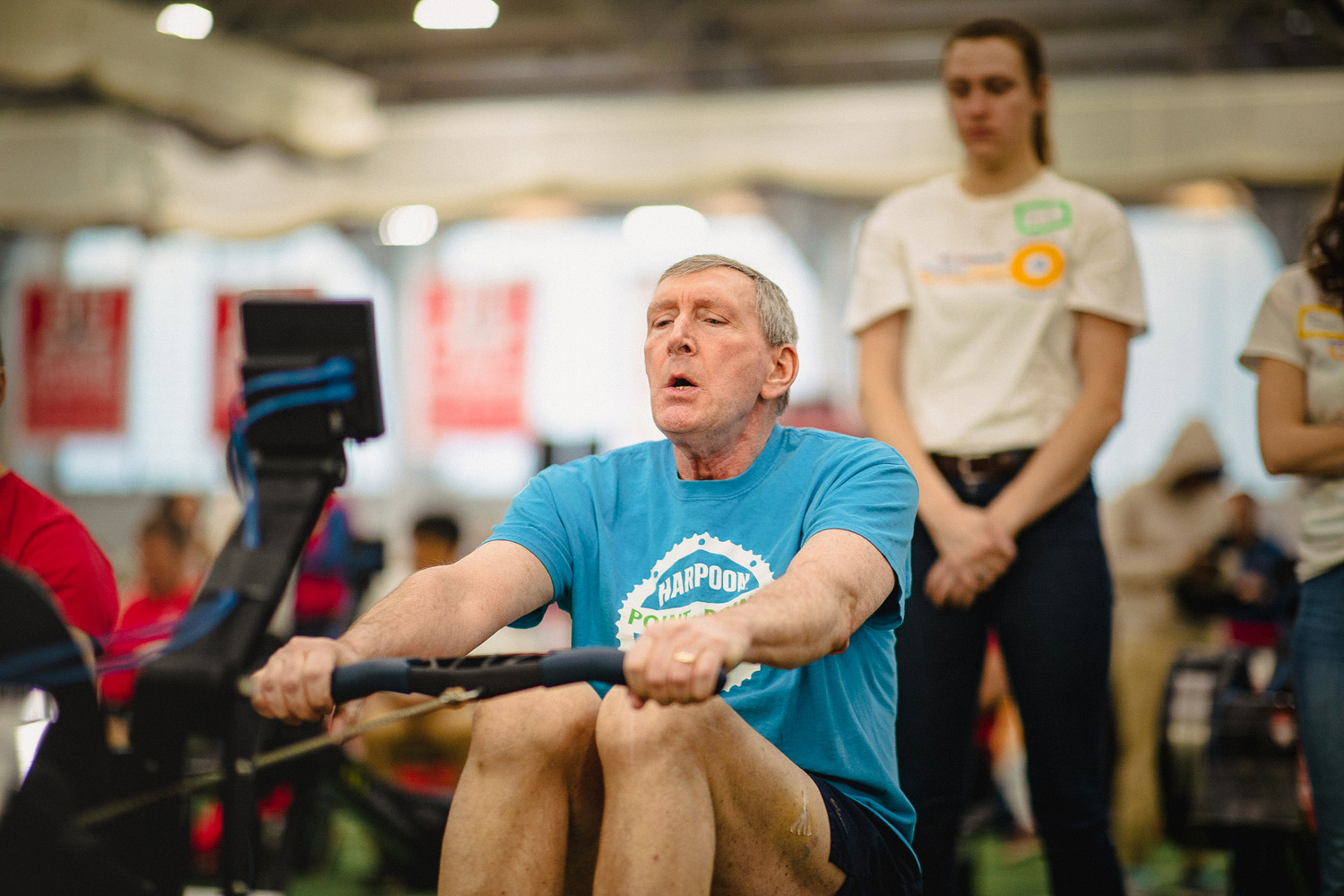 He’s rowed more than 6,000 indoor miles—enough to travel to the North Pole and back. His goal today: To make the podium at the national and world indoor rowing championships

Why did you start indoor rowing? I have always been an endurance athlete, competing as a runner and cross-country ski racer and instructor. But 15 years ago, I blew out my ACL. It needed a total reconstruction. Afterward, I was looking for a sport with less impact on my knees. A friend suggested indoor rowing—it was non-weight-bearing, easy on the joints, and excellent for the upper body. Along the way, I started racing. I enjoyed it so much, and I realized I could do well against the competition.

How grueling is an indoor race? A 2,000-meter [1.25-mile] race is basically a full-out sprint. I row up to 38 strokes per minute for 7-plus minutes, which equals more than 250 strokes at close to 100 percent of maximum effort. Lactic acid builds up in the muscles much faster than the blood can carry it away, causing extreme pain and loss of muscle efficiency. Much of my race outcome depends on how much pain I can stand. Not that I enjoy being in pain, but I focus on the reward. That’s one of the ways you separate yourself from the pack.

What is the history of the national and international championships? They began in 1982 at Harvard’s Newell Boathouse as the CRASH-B [Charles River All Star Has-Beens] Championship Sprints. They’re now held at Boston University’s large Track and Tennis Center. There are usually 1,500 to 3,000 participants rowing the 2,000 meters on Concept2 D ergometers. It takes in the neighborhood of seven minutes for higher-end participants, six for the Olympic-caliber athletes.

How have you fared at competitions? This past March, I placed fifth at the National Championships, which is my best result to date. But my time was only 7:18. In 2017, I rowed a 7:03, which would have put me on the podium this year for my new age group of 65–70. I had a knee replacement this spring, which I hope will improve my performance by reducing some pretty serious arthritis.

Has your Norwich experience influenced your rowing? Discipline, determination, and hard work are my strong suits. They are the main factors that will get me on the podium. Norwich’s dual mottos—I Will Try and Essayons—are the cornerstones. They apply not only at competitions but each and every day. They’re what get me on the erg, even on those days when I feel like slacking. Being competitive is all about pride.

A resident of Jericho, Vt., Andy Lowe ’77 holds a faculty appointment at the University of Massachusetts Medical School, where he is an instructor in the Department of Family Medicine and Community Health. He currently works as the chief strategy officer for the Outer Cape (Cod) Health Services and also serves as president of the New England Rural Health Association as well as the director of the Cape (Cod) and Islands Area Health Education Center.

Writer Bill Walsh ’77 holds a master’s degree in systematic theology from the University of Notre Dame. His previous Norwich Record article, “A Spectacular Flyby for Pete Jaskilka ’77,” appeared in the 2018 summer issue. Bill and his wife, Diane, live in Barre Town, Vt. He can be reached at This email address is being protected from spambots. You need JavaScript enabled to view it..