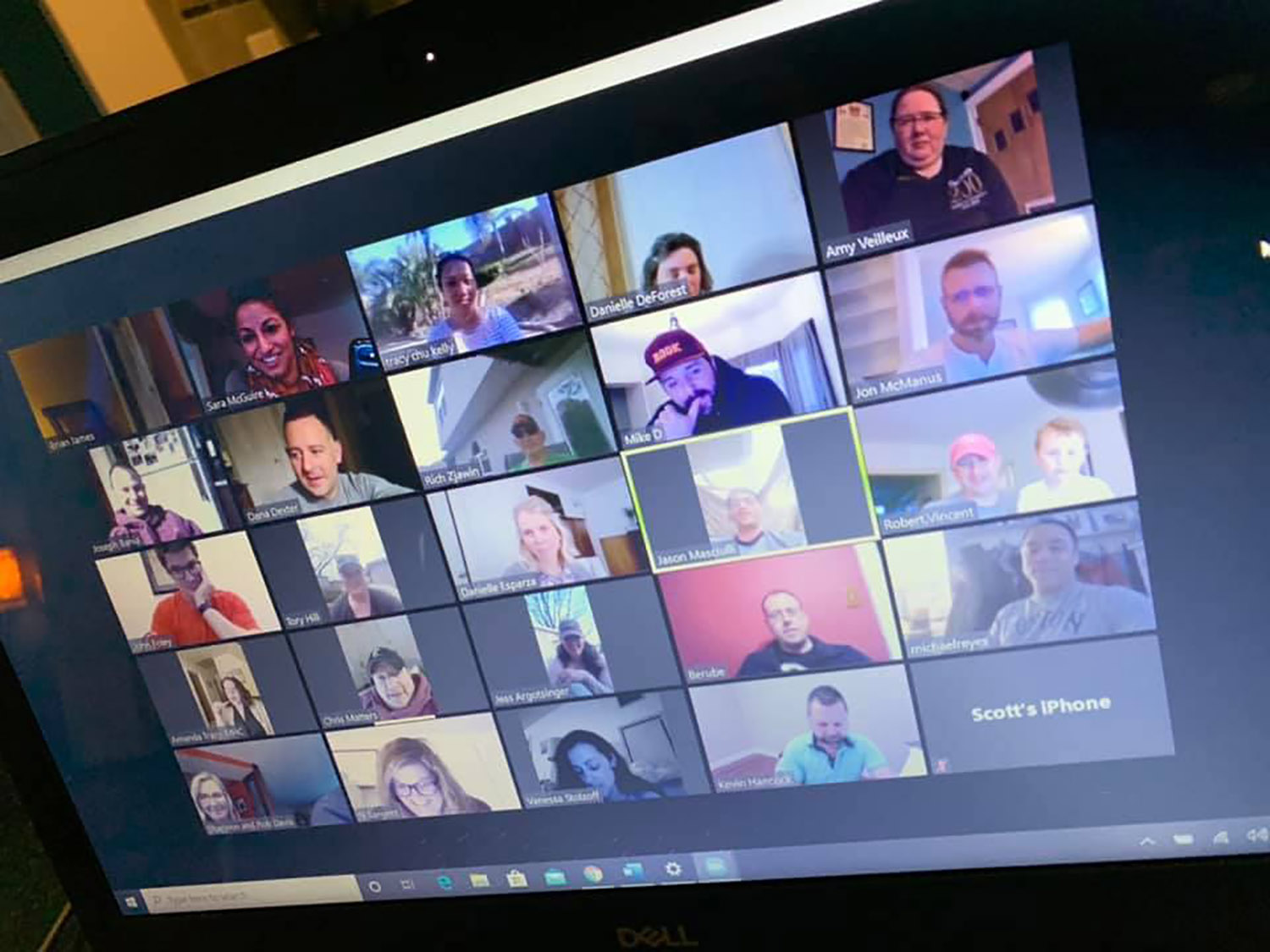 Stuck at home and missing her Norwich family during the pandemic, Sara McGuire ’01 & M’14 organized a virtual cocktail hour gone viral. The first get-together with friends from the Hill lasted nine hours. In the weeks since, the drop-in chats have also become a balm for the isolated and newly unemployed

With everyone sheltering in place because of COVID-19, I was trying to figure out a way for my Norwich friends and me to stay connected beyond texting or messaging. I heard about Zoom and how companies were using it as their meeting platform. I figured, “Why not try this with the group?” At that point, most of us were on our second or third week of not leaving the house.

I decided to create a private event on Facebook for a Friday night. Knowing people were working from home all around the country, I picked a time that I thought could work for everyone: 7 p.m. Eastern/4 p.m. Pacific. I invited all my Norwich Facebook friends, even those I hardly talk to on a regular basis. In my invite, I told them to also ask people I may have missed and/or people I am not Facebook friends with. This opened it up to over 300 alums invited the first night we did it. Not everyone who was invited joined. The alums who did ranged in class years. There were people that hopped on that I didn’t know, but someone had invited them. The first night we held it, there were people logged in that I hadn’t spoken to in over 20 years. Everyone was in a great mood and happy to see other alumni and classmates, some of whom they hadn’t talked to since graduation. It’s a cocktail hour, so of course there was plenty of drinking going on. We would make a toast to our Fallen or take a shot (or five) throughout the night just because. The mood was crazy. It was like being back on campus during Homecoming Weekend. Everyone was sharing stories, throwing on old uniform articles, showing old pictures, and just really enjoying the fact that we all had a platform to get together—even during this pandemic. That first night, the call lasted about nine hours. People would log on just to say “hi” and end up staying for a few hours. Others would log in for a few minutes between dinner and put¬ting their kids to bed. Some had their kids join in to say “hi” as well.

After it was over, I received messages for days from people saying how much everyone loved it and how it took them away from the reality of what was going on in their own life. It was the same effect you experience during Homecoming Weekend—somehow you are just transported back in time. It’s like 20 years had never passed. Everyone’s stories that night brought back so many memories for all of us.

The next week, many alumni messaged me, asking if we were having another “meeting” on Friday night. So I scheduled another private event that Friday, and there were a lot of new alums that logged in. Word was spreading about it and everyone wanted to check it out. I think at one point we had over 40 people on the call at one time. Some have asked how does anyone get a word in? It just works. People are respectful, and if someone is talking, others listen. If there is a group of people talking—like a group of Class of 1999 grads were the second week—the rest of us just let them reminisce as we enjoy the fact that they were able to connect again. People will log on, then leave to eat dinner. Some get called away. But the conversation keeps going.

The third time I scheduled the Norwich Cocktail Hour was on a Saturday. It was Easter Weekend, so I wasn’t sure if anyone would be interested. But they were. We even went international. We had friends from Germany and Bahrain log in.

I plan to continue hosting the Norwich Cocktail Hour as long as people are interested and as long as this pandemic is going on. A few people reached out to me and said that they are sheltering place alone, and having this meeting each week has helped them. Whether it’s being part of a group or just having someone to talk to, the state of the world that we are in right now can be extremely lonely for those going it alone with no spouse, kids, or family around. If this helps them get through the week, then I did something for the Norwich community—we all did.

Then there are those folks that are stuck with their spouse and kids, working from home with no break. They need the connection with Norwich friends just as much as someone on their own does. It refreshes the soul, and you wake up (quite possibly hungover!) the next day knowing that your Norwich family is there for you.

During the first three weeks that we held it, we have learned about people who have been furloughed from their jobs or had to file for unemployment. Others were experiencing marriage troubles or dealing with the stress of home-schooling their kids while still working a full-time job. Some had worries about their parents. The list goes on. It’s not all jokes and partying. We talk about serious things that are going on in everyone’s life. And everyone just listens and supports.

Since the cocktail hour began, many of us have said (myself included) that while we didn’t know certain alums from their class, we feel a sense of unity among everyone now that we have “met” them. Each week brings a new face that we haven’t seen in years. We had one alum fall asleep last week, and we just kept talking. Before we were about to sign off, we all yelled at him to wake him up. I didn’t want to log off without knowing he was OK. He eventually woke up, and I checked on him the next morning just to make sure he was all right. I’m in Washington state and he is in Massachusetts, which is the funny part. It doesn’t matter where we are, we all have a place to connect. I honestly feel that the Norwich Cock¬tail Hour is a stress reliever for most; we log in and just hang out. For a few hours each week, we forget about what’s going on in the world and are surround¬ed by our family. That’s what we all need at this time.

Sara McGuire ’01 & M’14 is former U.S. Army military police officer who served two tours in Iraq. She lives in Everett, Wash., and works as a corporate investigator for Boeing.