STORIES OF HOMECOMING: The Bicentennial Stairs 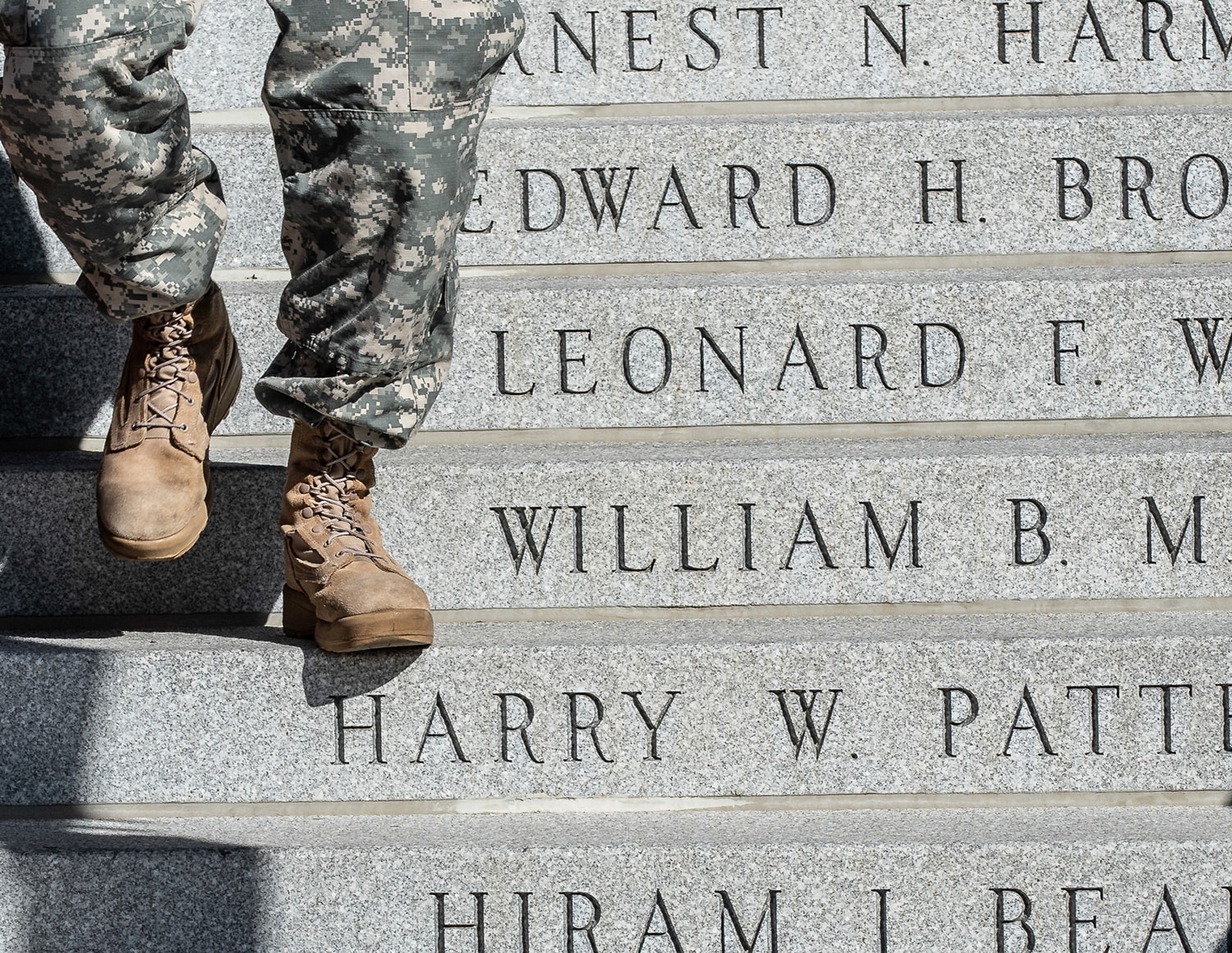 The letters came in the mail, surpris­ing some recipients, moving and humbling others. The notes told the 78 men and women, or in some cases their families, that they’d be forever remem­bered on Norwich’s campus.

Their names would be engraved in granite on one of the 78 steps of the new Bicentennial Stairs that would rise from the Sullivan Museum and History Center to the southeast corner of the Upper Pa­rade ground.

Now the stairs were complete—a monument to the service, sacrifice, sup­port, and trailblazing achievements of towering Norwich alumni and friends from the past century. Hundreds had gathered for the Thursday afternoon dedication ceremony.

Many of the 78 honorees were there. Among them were Robert Christie ’44, Phil Marsillius ’43, Thaddeus Buckzo ’47, and Fred Weintz ’47, four of the universi­ty’s remaining WWII veterans. Now well into their 90s, the four served their coun­try during its time of greatest need, before embarking on their own distinguished lives and careers.

Mike Popowski chaired the committee charged with the daunting task of select­ing the 78 honorees. During the dedication ceremony, the Northfield lawyer and long­time Norwich friend spoke about the val­ues and goals that animated and inspired the committee during their five-year ef­fort. NU’s 180-year-old mission statement was “like gold” for the committee’s delib­erations, Popowski said. “Each of the 78 honorees on the stairs embodies moral, patriotic, efficient, and useful service to Norwich, their state [and] community, and our nation.”

They also possessed Norwich’s signa­ture sine qua non traits—leadership and service. “At Norwich, values have always mattered. They did at our founding, at our centennial, and today more than ever … Norwich values remain eternal.”

But most important, he said, the hon­orees were chosen because their lives and service tell the Norwich story.

Cadet Col. Ethan Hagstrom ’20 also addressed the crowd, recalling his expe­rience as a freshman, when like all rooks he was barred from using the Centenni­al Stairs.

“When I was a freshman, I could not wrap my head around this rule,” he said, thinking it was done merely to inconve­nience him and other rooks. But Hagstrom told the crowd that over time, he developed a better understanding. Rooks “need to understand the gravity” of the people who came before them and the impact they had on Norwich. “That awareness and respect takes time to establish,” he said.

“Now there are new names,” he said. It was important for Norwich students to learn their stories, and he told the crowd that as a student, he found the names on the new Bicentennial Stairs empowering. “They show us that people care deeply about this university, its mission, and its continued success.”

Lt. Gen. Craig Koziol ’76, U.S. Air Force (Ret.) was among those surprised and humbled to be honored with a Bicentennial Stair. During a 36-year Air Force career, Koziol received the Defense Distinguished Ser­vice Medal and other high awards. He described his inclusion on the Bicenten­nial Stairs as a “fantastic honor” and said Norwich provided the foundation for his successful military career.

“Coming to Norwich taught me about integrity, honesty, teamwork, loyalty, and helping people out to be successful. … I’m very proud to have been able to attend this great university.”

Dr. Kevin D. Crowley ’70, U.S. Army (Ret.) served with the Airborne at Fort Bragg before returning to Northfield to practice medicine and advise and mentor dozens of Norwich students who expressed in­terest in future medical careers.

“When I got the letter, I cried,” Crow­ley said. “It’s just a humbling experience, and I don’t know as I’ll ever fully believe I belong on there.”

Brig. Gen. Kimberly Baumann ’87 U.S. Air Force distinguished herself as the first female Norwich cadet to reach the rank of general officer. An assistant adjutant general for the Rhode Island Air Nation­al Guard who also serves on the Norwich University Board of Fellows, Baumann said she was surprised, and pleased, to be honored.

“I don’t think any of us expect(ed) it,” said Baumann, who is married to a Nor­wich grad and the mother of another. “There was a whole committee there and a hundred years to choose from.”

She added, “Everybody who’s on the stairs, the ones who are still on Earth, I think our goal is to keep giving back to the university that gave so much to us.”