With help from friends, Donald O’Neill ’87 turned an annual fishing weekend into a big-hearted fundraiser for charity 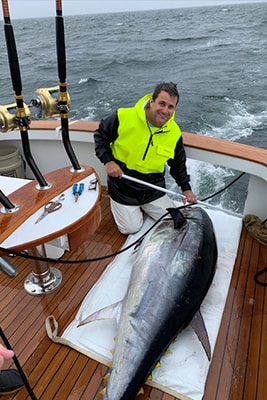 Walk into the Braintree, Mass., offices of Condyne Capital Partners, the real estate development and investment firm 30 minutes outside of downtown Boston, and you’ll see plaques on the walls commemorating various charitable donations.

Less obvious is the story behind them: how a simple weekend getaway with friends organized by Condyne’s vice president, Donald O’Neill ’87, 18 years earlier slowly evolved into the big-hearted charity fishing tournament it is today. Known as the Big Game Battle, the annual deep-sea contest is now a fundraising juggernaut, one that can raise upwards of $350,000 in a single weekend.

The proceeds of each year’s tournament are donated to a different char­ity chosen by O’Neill and his fellow organizers. They typically benefit caus­es that support disadvantaged or ill children, or foundations seeking to advance research into humanity’s most intractable diseases.

Of course, you don’t need the walls to talk when O’Neill, ensconced in a Condyne conference room, can tell you the story himself. And as he explains, it all started with a group of guys. “We had, I think, three boats, and we said, let’s go away for a fishing weekend. The next year, three boats went to five or seven.” They ordered a silver prize cup, and agreed to engrave the winner’s name on it each year. Attendance grew to 20 boats a year, then 30, then 40.

Today, the tournament is capped at 50 to 55 boats, captained, crewed, and supported by over 400 people. While the event itself lasts just a single week­end, participants’ involvement contin­ues all year. O’Neill, a communications major at Norwich, sends out a monthly newsletter, and various committees hold regular meetings.

Participants say the tournament brings one another and their families together. Hugh McLaughlin ’87, a friend and classmate of O’Neill’s, joined the tournament about a dozen years ago. McLaughlin was also joined by his friend Dan Evans ’87. Hearing that Dan’s wife Debbie Evans ’87 (née Ca­melli) had recently passed away from cancer, O’Neill suggested Dan come along. “So we went down there, and we won it,” McLaughlin recalls. “Every­body was excited to see Danny win af­ter he’d had such a tough year. We all fell in love with the tournament.”

For his part, McLaughlin has re­turned every year—with family in tow. He says the connections built during the tournament last far beyond the weekend. O’Neill’s twin daughters have become “like sisters” to McLaughlin’s eldest son, noting that both women flew to visit him for his 21st birthday.

And the tournament itself has a mis­sion beyond just fishing. Eight years ago, the Big Game Battle started fund­raising for charities. The philanthropy grew quickly and organically, just as the tournament itself had. “In the be­ginning,” O’Neill says, “we thought, if we raise $20,000–25,000, it’s a home run.” He laughs. “Then it went to $75,000, then $100,000. Then one year it’s $345,000.” To date the tournament has raised over $1.1 million dollars for charitable causes.

Choosing a new charity every year, O’Neill and his fellow organizers have donated the tournament’s proceeds to support causes ranging from founda­tions seeking to prevent or cure diseas­es, such as multiple sclerosis, juvenile diabetes, ALS, and Rett syndrome, to summer camps for underserved or ill children, including the Boys & Girls Clubs of Dorchester, Boston’s Camp Harbor View, and the Hole in the Wall Gang Camp.

O’Neill is careful, though, to main­tain focus on the original spirit of the event, namely good company and good fun. “We don’t want the charity to take over the fishing tournament,” he says. “It’s a tournament first, with a charity aspect. We don’t want to lose why we’re there—to have a good time. We’re there to go fishing, and we [happen to] raise some money along with it.”

At first glance, limiting the focus on fundraising might seem counter­productive. Why not talk up the tour­nament’s charitable giving aspect? But as O’Neill explains, guilting people into donating would only drive them away. Instead, he focuses on keeping the “fun” in the fundraising. The result, he says, is that participants keep return­ing—and donating. “It adds up,” he says. “It’s not because we’re carrying a big stick. ... Some people don’t do it, and that’s OK with us. But, together, we’ll make a difference.”

McLaughlin brings this up, too— that O’Neill’s boundaries keep the event from mutating into an obligation, rath­ er than a joy. “He keeps the brakes on it a little bit,” McLaughlin notes. “He says, ‘This is great, but I don’t want people to get exhausted by it.’ He doesn’t want captains saying, ‘I spent so much last year, I can’t do it again this year.’ He draws that fine line instinctively. It’s interesting to watch.”

It is a leadership instinct that O’Neill seems to have been born with and has only honed since their days together at Norwich, McLaughlin says.

By way of example, McLaughlin points to the fact that every boat in the tournament “has eyes on the other boats. If it’s a little bit bumpy out there, there’s always someone on the radio talking to you,” he says. “Safety is par­amount. Everybody says that, but [O’Neill] acts on it.”

That attitude is infectious. O’Neill has built a community of people ready to help one another. If a boat loses a mo­tor, other boats race to tow it in. The tournament may put fishing first and charity second. But with O’Neill at the helm, generosity permeates the event.

In conversation, O’Neill downplays his role as the group’s leader, bringing to mind the Zen koan, in which a mas­ter fixes something, then says, “It hap­pened by itself.” O’Neill has been that way since Norwich, McLaughlin says. “Donnie was [one of the] captains of the hockey team, but he was not a boastful guy. He had a humility about him, and always a warmth and a smile.”

The fact that O’Neill helped lead his college team came as a surprise, as he had simply told a reporter that he’d “played.” The exchange, when relayed to McLaughlin, makes him laugh. “There ya go.”

O’Neill still plays hockey with a group of guys, some from Norwich, on Tuesday nights in the Boston suburb of Hingham. Talking about it, he doesn’t raise his past leadership post at Nor­wich. He just goes straight into describ­ing his community, and how lucky he feels to belong to it.

“O’Neill has built a community of people ready to help one another… With [him] at the helm, generosity permeates the event.”