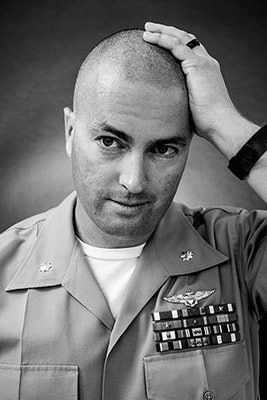 An author and Marine aviator who flew CH-53E Super Stallion helicopters during multiple deployments in Iraq and Afghanistan, Maj. Ian Brown M’15 now serves as operations officer at the Brute Krulak Center for Innovation and Creativity, a think tank at Marine Corps University in Quantico, Va. In 2018, Brown published A New Conception of War: John Boyd, the U.S. Marines, and Maneu­ver Warfare (Marine Corps University Press), an outgrowth of his military history master’s thesis at NU’s online College of Graduate and Continuing Studies. His book explores the intellectual foment and history behind the Marine Corps’ present “maneuver warfare” fighting doctrine, a strategic framework developed by Air Force fighter pilot John Boyd (1927–97) in the years following Vietnam. The Record spoke with Brown in September before a guest appearance at the Norwich University Military Writers’ Symposium. (Note: Brown’s comments—edited for length and clarity—reflect his personal views and not those of Marine Corps Univer­sity, the U.S. Marine Corps, Department of Defense, or U.S. Government.)

What is your book about and why did you write it?

It’s a historical look back at a certain time in the Marine Corps and at an individual. The Marine Corps came out of Vietnam doing some serious self-reflection. You had a lot of people who’d been on the battlefield who said afterward, “We can’t do that again. How can we do something differently? So that we don’t have helicopters flying off the roof of the embassy while the enemy is storming the gates? We have to go in for the win every time. How?”

So that was sort of the institutional impetus. Then on the flip side, you had this individual, John Boyd, who was an Air Force officer. Throughout his career, he kept seeing little nuggets of information that he had not seen before. Eventually he decided to fit them into a larger framework for understand­ing competition and conflict and de­cision-making. At the same time, you had these Marines who were looking for a better framework for how to think about war and conflict. The two of them kind of merged together. It started from the bottom up. Boyd would be invited to speak to a group of captains, and so on.

At the same time, there was also a lot of discourse in the professional journal of the Marine Corps, the Gazette. To have a discussion for your profession, back before web pages and blogs and podcasts, you went to your profession­al journal. That’s where serious ideas were talked about. So the Gazette be­came this forum, and the editor at the time cultivated this. He annoyed a lot of generals sometimes because of the freedom of thought that he gave in the Gazette. But people were writing and debating different points about this theory of conflict that Boyd ended up talking about.

It eventually gained enough trac­tion that you had some of the Corps’ key senior leaders, including [Norwich trustee emeritus] Gen. Alfred Gray (USMC, Ret.), who latched on to it. They implemented this thing which came to be called “maneuver warfare” at increasing levels. Starting at unit levels, then as part of the school cur­riculum. To the point where, when Gen. Gray became the 29th Commandant of the Marine Corps, he said, “Maneuver warfare is going to be the war-fighting doctrine for the Marine Corps. Every­body else, you can follow.” He commis­sioned the doctrinal manual that sort of captured that.

Is it still the war-fighting doctrine for the Marines today?

Yes. It’s been revised over time, but it is still the conceptual strategic framework.

For the uninitiated, what is maneu­ver warfare?

There are a lot of different answers. But its core element is looking at your adversary, first, as a thinking human organism. One that has a perception of what’s happening on the battlefield based on all the inputs into his deci­sion-making framework. So if you can, you find ways to corrupt, corrode, de­grade, slow down that decision-making framework—throw fog and misinfor­mation and deception into his input. So that your adversary is processing mis­information, or degraded information, or total lies that you’re feeding them. You degrade his ability and that of all his different little groups of humans to oppose you in a cohesive, organized fashion.

You break them up into what Boyd called “noncooperative centers of grav­ity.” The key is that you’re not looking at killing and destroying everything on the battlefield. Rather, you’re slicing apart the connections that allow those targets to operate effectively against you. Once you do that, you don’t have to kill everything on the battlefield. Because you have negated your adver­sary’s ability to impact you. You will still have to go and probably kill and blow up some stuff, right? Because part of breaking up those connections may mean physically attacking a target … a tank or a communications node or a headquarters where the senior guy is.

But it’s looking at your adversary from a very human-oriented perspec­tive—finding out what his weaknesses are and then finding ways to throw sand in the gears in every possible way that you can. So that they react more slowly to you, because they have bad informa­tion. So that, as they try to make deci­sions on the battlefield, each decision is more and more unhinged from the actual reality going on around them. Because you have clouded them—you’ve degraded them to the point where they can’t respond to reality.

Was that a radical approach at the time or merely an evolution Boyd made to existing strategy?

It was an encapsulation of some oth­er threads of warfare. Boyd would have been the first one to say, “This is nothing new.” He liked to give an exhaustive lesson on military history, going back to Sun Tzu and the ancient Greeks. Then all the way through World War II, Viet­nam to the information he had. But he was trying to look at different types of conflicts to see, not just how you win, but how on paper, a smaller, less well-armed adversary with smaller num­bers won on the battlefield. This has happened time and again throughout history. Some have done it consciously, like Sun Tzu (545–470 BCE) during the Warring States Period in China. Others did it unconsciously; they looked at the battlefield and realized, “This is what I need to do.”

What Boyd did was, he collected those historical examples. The big new thing he brought to bear was to apply other, nontraditional military concepts and feed them into this in­tellectual framework on conflict. He brought in physics. He brought in polit­ical science. As 18th- and 19th-century Prussian general Carl von Clausewitz said, “War is continuation of politics by other means.” Boyd brought in a wider scope of different political perspectives. This included Marxism, Leninism— what drove the communists, the Soviets during the Cold War, and the Vietnam­ese in Vietnam. Boyd had elements of mathematics in there, as well. He took all this stuff and built a framework and a perspective for analyzing yourself and your adversary in this context and then making decisions to ruin your ad­versary’s own decision-making ability, using that framework. So the bedrock of maneuver warfare wasn’t new. If you’ve studied military history, all that stuff is out there. What Boyd had was a fresh insight. He had the broader perspective to see that you could bring in nontradi­tional subjects and themes and apply them to make yourself a more effective war-fighting organization.

Were there other themes you set out to explore in your book?

Yes. I wanted to try and break down a little bit of what I thought was an arti­ficial barrier. One that seems to suggest maneuver warfare is only for conven­tional conflict. That you can’t apply it to other things. I think that you can. When you really dig back into Boyd’s thought, it’s clear he intended that it did apply more broadly to other types of conflict, as did some of the other ma­neuver thinkers in the Marine Corps at the time. That’s what I wanted to bring to light. Apart from how maneuver war­fare applies to business, there are a lot of articles and other materials written about how our adversaries are using this theory of conflict against us.

Give us some examples.

One article talks about how it ap­plied to ISIS, another about how the Russians were kind of doing it. Their point was, it’s maneuver warfare in re­verse. Like, all of a sudden, we were the bigger, numerically superior, techno­logically advanced adversary. And you have these smaller, less-well-resourced opponents who were trying to figure out how to achieve their own objectives. And they were doing it by understand­ing what our weaknesses and vulnera­bilities were and going after those. So ISIS, for example, their ability to get into the information battlefield essentially caught us off guard. At least in my per­sonal opinion. They leverage things like social media, videos, Twitter, online discussion boards as recruiting tools, as ways to spread their ideas.

Looking at the Russian perspective, I touched on this a little bit in an arti­cle I wrote about modern applications of maneuver warfare. As far as Russia going into the Crimea, I read a couple of think tank reports that said, when the Russians went in, they didn’t have a superiority of conventional forces. They actually went in with fairly light infantry and some light armored vehi­cles. That was their footprint. There weren’t that many of them. But they had used cyber and information to disrupt the decision-making capability of their adversary. They sowed so much confu­sion and they so degraded the ability of their adversary—their local adversary for starters, but also the European and ally nations as a whole. They clouded information to the point that you didn’t have a good idea of what was going on, until they walked in and took it. Rus­sia found a way to take their smaller, lighter force and gain an asymmetric advantage by assessing how bad their adversaries were at information man­agement, for example.

I think there are groups around the world that understand that. Again, part of why I wrote the book was to pull the curtain back and say, “Hey, we kind of wrote the doctrine on this the first time, and now our adversaries are reading our mail, and they’re using it against us. Let’s go back and look at the history of this to get a better understanding of it, so that we can start being more effective in using it against our adversaries.”

“Russia found a way to take their smaller, lighter force and gain an asymmetric advantage by assessing how bad their adversaries were at information management.”