An insider’s guide to Washington

The weeklong immersion ‘dares students to dream in a way that they haven’t before, because their understanding of the universe of possibility has expanded exponentially.’

Last semester, students in Professor Yangmo Ku’s U.S. Security Poli­cy class spent spring break in Washington, D.C., where they met with high-ranking staff in federal agencies and think tanks many had previously only read about. Visiting public policy nonprofits like the Brookings Institu­tion and executive branch agencies ranging from the White House Nation­al Security Council, National Security Agency, and National Counterterrorism Center to the Department of State and Pentagon, students were privy to backstage meetings and conversations about the process, politics, and nuances of national security policy at the highest reaches of government. This was not a D.C. tourist tour, but an inside look, however brief, of the work and role of executive branch federal agencies. Agencies charged with protecting America’s national and foreign inter­ests in today’s highly complex global security landscape.

Now in its sixth year, the weeklong experiential learning capstone is made possible by months of planning and hard work by Washington-area alumni. Distinguished in their own right, these busy people spend countless hours ask­ing favors, opening doors, securing ac­cess, and enlisting colleagues to share insight about their work, their agencies, and the pressing issues of the day. At the National Security Agency, for ex­ample, agency director Gen. Paul Na­kasone spent 45 minutes speaking with Norwich students about the work and challenges facing his agency, which is also home to the U.S. Cybersecurity Command.

At the Department of State, students spent a nine-hour day absorbing rap­id-fire, half-hour presentations from senior diplomats and desk officers about the U.S. positions regarding Iran, Af­ghanistan, China, Turkey, and the Unit­ed Kingdom, among others. Later in the week, they were on hand for the swear­ing in of Ellen McCarthy, assistant secretary of the department’s Bureau of Intelligence and Research. The event was attended by Secretary of State Mike Pompeo with VIP access made possible by Mary Bati M’10.

A State Department intelligence analyst, Bati took the lead coordinating the Washington itinerary for this year’s U.S. Security Policy program. She says it was gratifying to see students gain a fuller, more nuanced and multifaceted view of the many career paths available to them in federal service. The week-long immersion “dares students to dream in a way that they haven’t before, because their understanding of the uni­verse of possibility has expanded expo­nentially.” 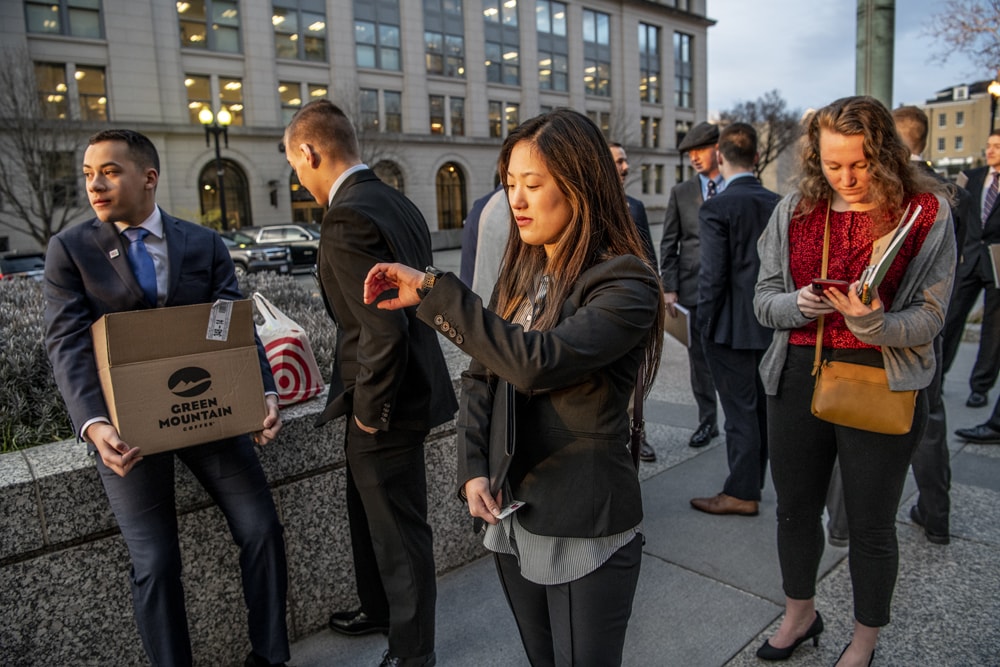 International studies and political science major Sarah Ingraham ’20 describes D.C. policy week as a “vital experience,” one that reveals the interworking of government: How agencies advance the overall goal of U.S. domestic and international policy while also “compet[ing] over agendas and resources.” One unexpected lesson: “Norwich helps Norwich”— a phrase she heard often by D.C. alumni. “It gave me a sense of community and resources that I will be able to use for the rest of my life.” 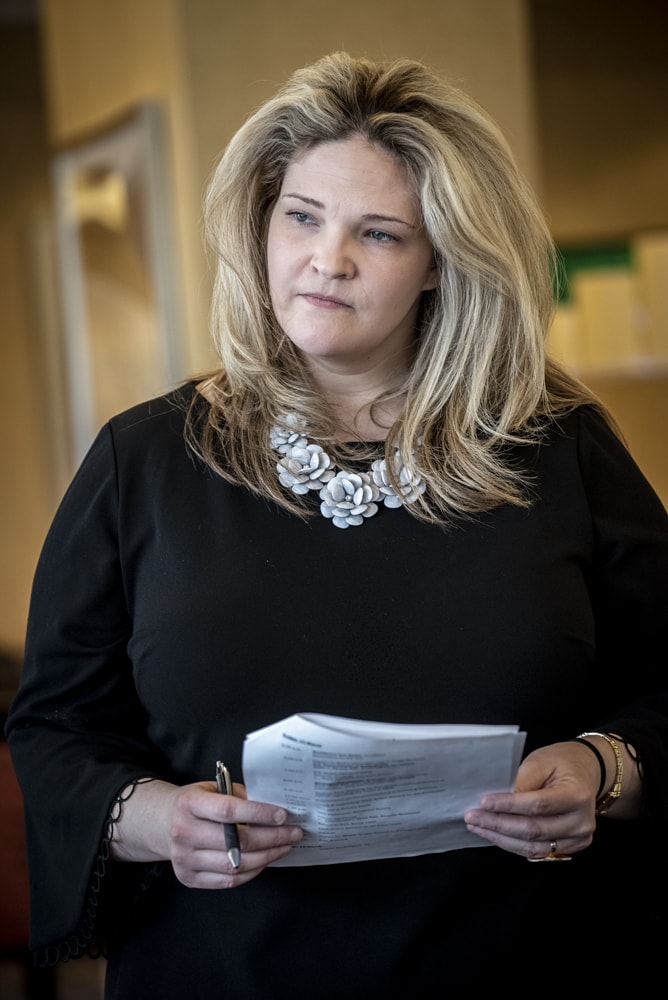 Intelligence analyst Mary Bati M’10, who joined the Department of State in 2006, describes her colleagues as “professional extroverts.” Now chief of the agency’s Counselor and Management Liaison Office, Bati holds three master’s degrees, including a master’s in counterterrorism with a concentration in diplomacy from CGCS (her first). “Norwich was really my first step” toward realizing her career goal of working in the intelligence field, she says. As for their own careers, students took advantage of their time in Washington to network with alumni and other experts to expand their circle of contacts. “They presented themselves like the true professionals that they are,” Bati says, “in a way that showed that they were hungry to just jump in and get started on their careers.” 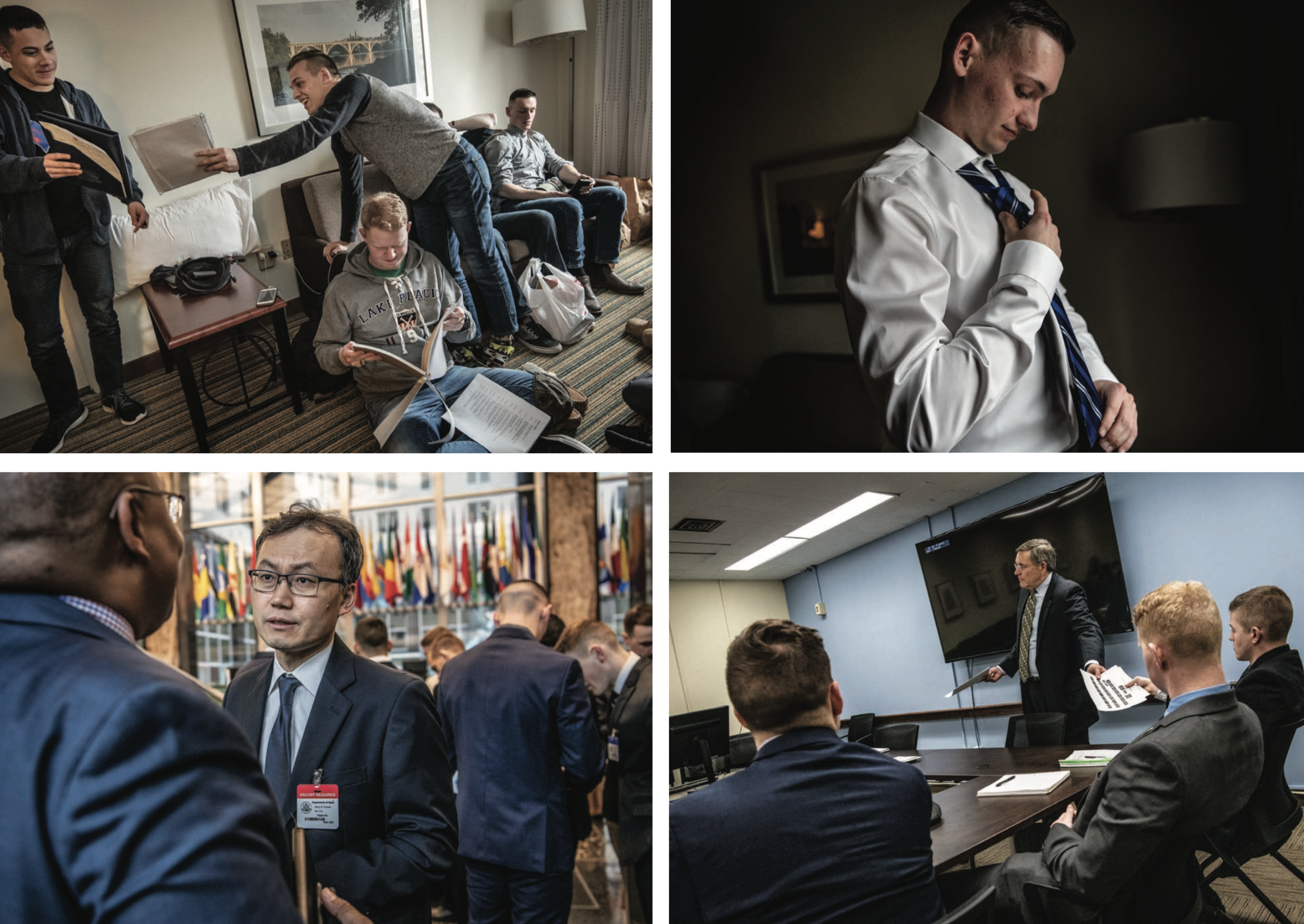 Top left: Paul Hughs ’21, Ben Forsman ’20, Brendan Drew ’19, and Jeremy Thompson ’20 prepare for the week with faculty and fellow students in their hotel.

Bottom left: Associate Professor of Political Science Yangmo Ku speaks with Tony Johnson ’94 at U.S. Department of State headquarters. Prior to visiting Washington, Ku led seven to eight weeks of classroom discussion exploring theory and analytical and historical frameworks to help students “clearly understand the dynamics of foreign policy and security policy making” in the U.S. government. At the State Department, Norwich students spent eight hours hearing from junior and senior diplomats charged with resolving tough policy issues regarding China, North Korea, Russia, Iran, and beyond. “It was fabulous for our students to be brought to the world within one day [at] the State Department,” Ku says. 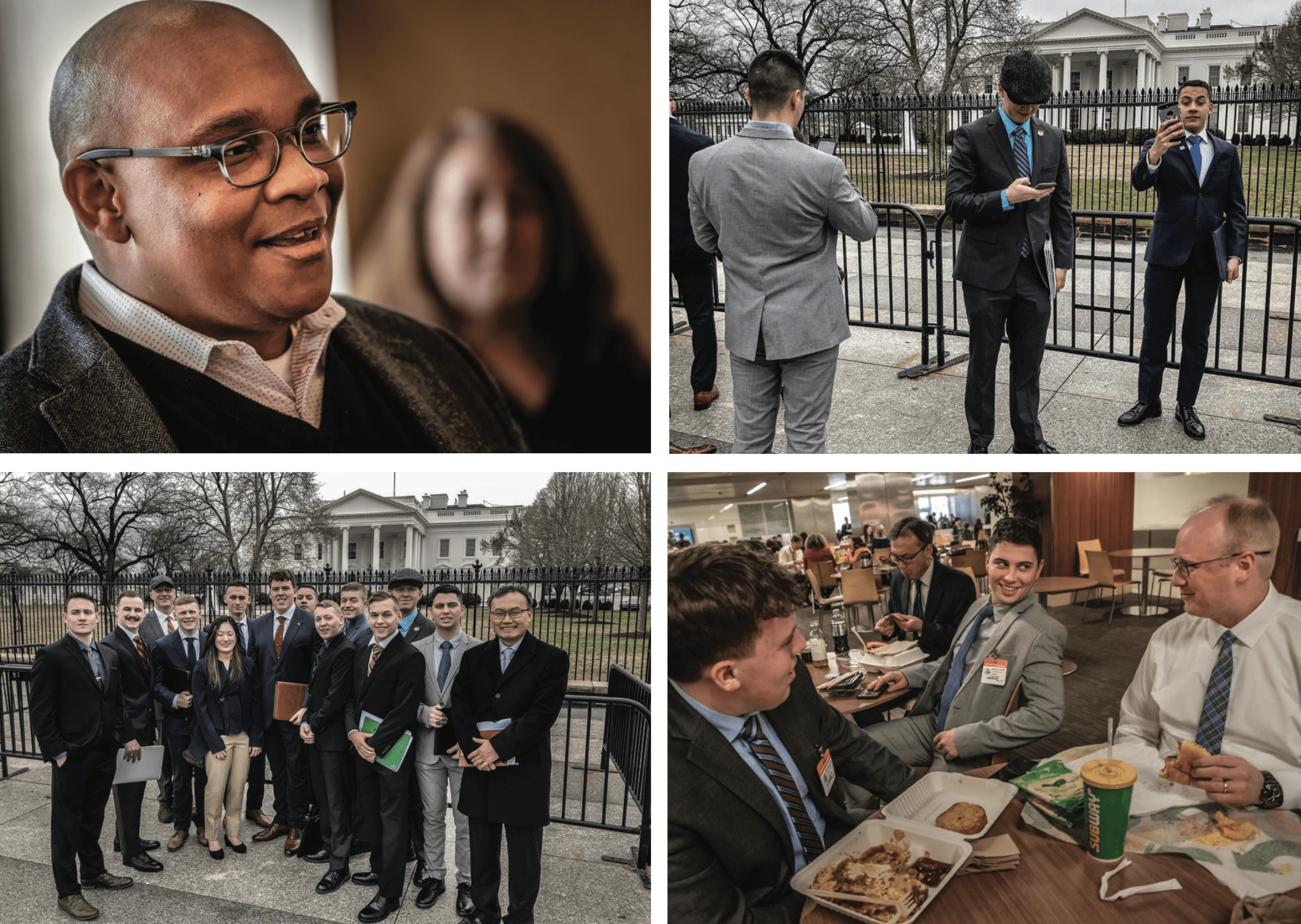 Top left: Tony Johnson ’94 works as a national security and military capabilities analyst for the Pentagon’s Institute for Defense Analysis. He describes the unit he leads as “the special operations team” of the research division, one that helps decision-makers and key leaders in the Department of Defense “noodle on really difficult problems.” This year, Johnson coordinated a national security simulation exercise for Norwich students, in which they assumed roles as national security principals responding to a suspected bioterrorism event in Florida. Like other alumni, Johnson volunteers for the Washington policy week program as a way to give back. “I had people who helped me” as a student, Johnson says. “It’s just a way for me to pay back what they did for me.”

Bottom right: Assistant Professor of Political Science Michael Thunberg (right) chats with computer science and information assurance major Harry Blanchard ’19 (left) and political science major Joseph Mullins ’19 (right) over lunch during a day-long visit to the U.S. Department of State. Thunberg, who joined students during their week-long immersion in Washington, says the trip offered students key insights. Among them: “Being smart is necessary but not sufficient to reach senior decision-making positions.” These experts also understand the value of interpersonal relationships and “the importance of acting genuinely and without self-motivation toward others.” Thunberg observes that undergraduates also saw “the mental stamina necessary to participate in policy discourse at the national level is extraordinary.” Staffers regularly work 10- to 12-hour days in “a relentless and unforgiving environment where small mistakes have large consequences.”