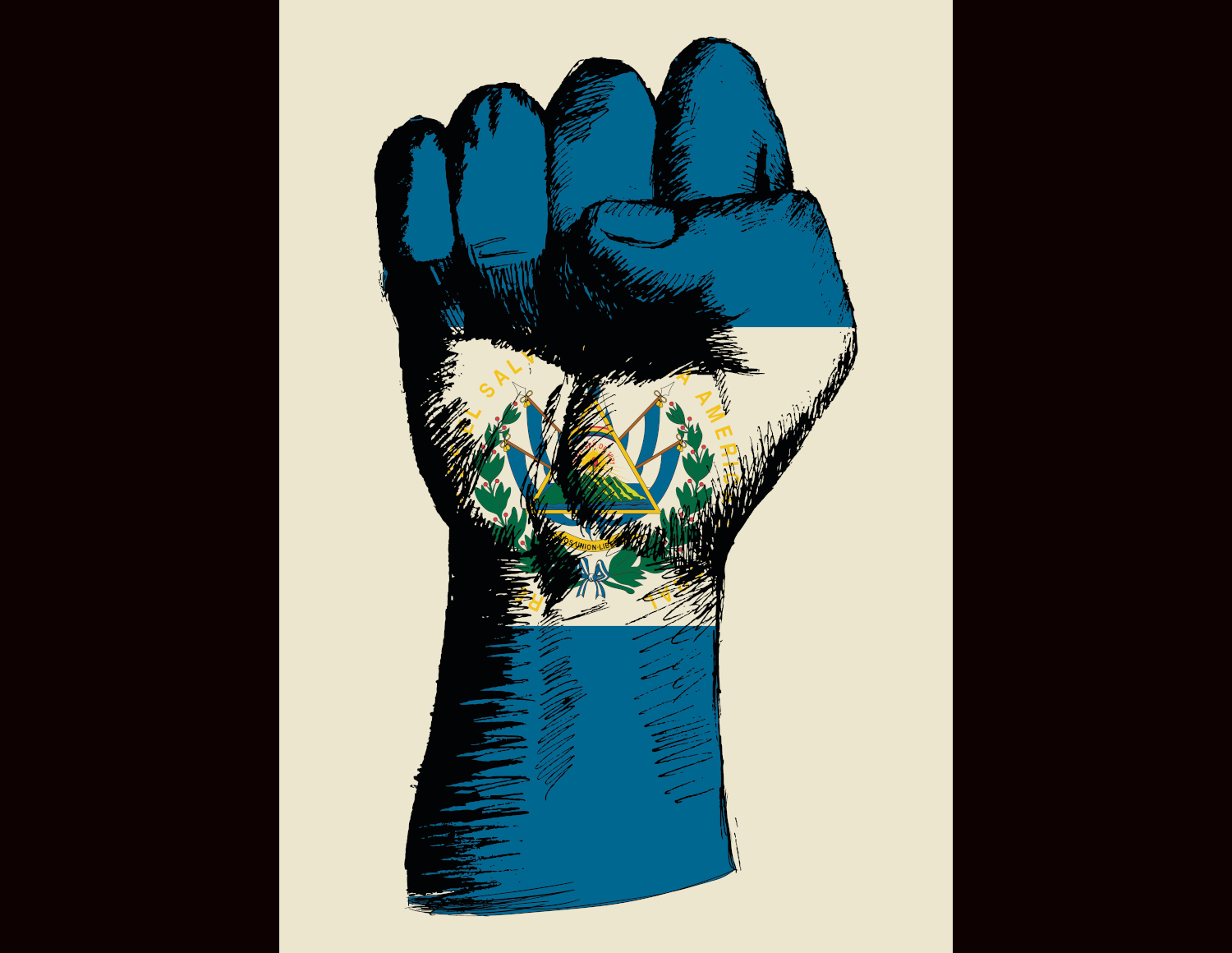 People have often used creative arts to illustrate emotions, wishes and suffering, and to help communicate sentiments to those who may not be aware of social and political situations besides their own.

Paintings or illustrations may depict such things as massacres, while poetry and literature may recite the painful stories of familial loss or the unequivocal joy felt by reaching the end to a war. Artful expression can manifest itself to protest any number of injustices felt by an individual or a group of people who share a set of principles. Musical composition, performance and listening are precisely this type of art that was produced during the civil war years in El Salvador. This essay examines the production of protest music and its unique role in El Salvador during the Salvadoran Civil War as an outlet for activist inspiration, communal education and clandestine propaganda.

Roots of the Conflict

It is difficult to pinpoint an exact date for the beginning of the Salvadoran Civil War, as the conflict was one that had been unfolding since the country gained independence. For the discussion here, the years encompassing the civil war will be approximately 1965 to 1990. The scale of repression and brutality experienced by Salvadorans during the civil war years created a stage for musical composition that played an unprecedented role in social dynamics. Approximately 75,000 Salvadorans died between 1979 and 1990, as well as an unknown number of victims who disappeared and were abducted by militant terrorist groups known as death squads. Some 550,000 were forced from their homes, while hundreds of thousands more fled to neighboring countries, such as Honduras. Music became a medium through which Salvadorans communicated with one another, mourned together and condemned the corrupt government and the brutality of the military. Radical musical groups formed, led by musicians who had discovered that music could serve as a means of instruction, propaganda, inspiration and communication at a time of intensely brutal authoritarianism. The groups found loyal followers in the Salvadoran people who were desperate to hear the truth and eager to fight back against the military and the oligarchy. When radio stations began to be bombed, and censorship attempted to be enforced, musicians and their followers went underground to continue to spread their provocative and rousing songs. Music became one of the largest fronts in the civil war against the military, and one that those in power had not expected and were powerless to stop.

Salvadoran musicians contributed toward uniting the rebel movement and gave it strength to persist. Uniting the masses was not an easy endeavor as the conflict that eventually exploded into the civil war was one that had been brewing since the country’s inception. El Salvador had experienced governmental corruption and power manipulation essentially from the moment it became an independent nation. Powerful groups dominated the economic scene, consolidating political power and influence over decisions in the hands of a select few, creating a social divide that would never be narrowed. Tensions mounted through the 20th century, and activists who felt the desperate urgency to instigate social reformations to improve their living situations began to form liberation organizations like the Farabundo Martí National Liberation Front. Fearing an uprising, the government and the military used violent force to suppress attempts to rebel. Murder, assassinations, kidnappings and death squads became the norm in Salvadoran daily life, creating an unbearable atmosphere that set the stage for creative outlets such as music to reverberate through the masses.

Sounds of a revolution

Musicians leveraged calculated techniques to ensure the effectiveness and circulation of their songs to the largest audience possible. The more recognizable the tunes, the more probable it would be that they would appeal to the listener “because a song you remember, you repeat it over and over…consciously or unconsciously you become involved with it.” (Almeida and Urbizagástegui 16.) That a person can, and will, become involved with a song signifies that it has an emotional relationship to a person or a society with the power to inspire, console and explain the events that were often too difficult to verbalize through simple conversation. The combination of a sweet and simple melody with a strong, emotive message is evident in the song “Las casas de cartón” (“Cardboard Houses”) by Los Guaraguao:

Since meetings were too dangerous an option for communication, and instructional tools such as pamphlets were too easily confiscated, liberation groups turned to music and musicians as an effective means of communication. Low levels of literacy meant that music was a much more efficient means to reach the masses. Salvadorans who decided to partake in liberation activities could listen to the information being conveyed to them through music, such as when a song “emphasized the importance of labor strikes or building neighborhood barricades” or dictated “concrete strategic and political needs” (Almeida and Urbizagastegui 17).

Relaying tactical information is the aspect of musical composition that few dictatorial rulers anticipated. Leaders did not expect propaganda to take shape through such a medium, and by the time they realized the tangible organizational impact that musical communication was having, music had become too large of a medium to fully censor. The military could bomb communities and assassinate leaders, but the fact was that music was being created and vastly distributed. It was impossible to stop every anti-government, pro-reform, liberation-minded song, show, radio broadcast and impromptu gathering occurring at any given time in the entire country. People like to listen to songs, especially recognizable, upbeat or poignant songs. Musicians involved in the liberation efforts knew that the more protest songs were composed in popular styles, the more accepted they would be, thus making their distribution immense, particularly in rural areas where contact was more difficult than urban regions. Without such a widespread distribution, larger numbers of Salvadorans would not have heard the message and responded to the repeated calls to action.

Music, society and culture are undeniably interconnected, a notion that cultural studies scholars prove again and again by looking at the way music interacts with culture and social life. Anthony Seeger best explains how “rather than studying music in culture, an [ethnomusicologist] studies social life as performance” (xiii). This was the stance that guided fieldwork that I undertook to explore connections between music and war in the city of San Salvador and the towns of Chalatenango and Ignacio Ellacuría.

Margarita, a woman from Ignacio Ellacuría who was enthusiastic about the topic of exploring music and memory, recounted a massacre that occurred in the town on February 11, 1990.  She described a song called “Canción de la masacre en la comunidad” (“Song of The Massacre in the Community”) that offers a portrayal of the day’s events. Below is a portion of the song as written by Margarita: 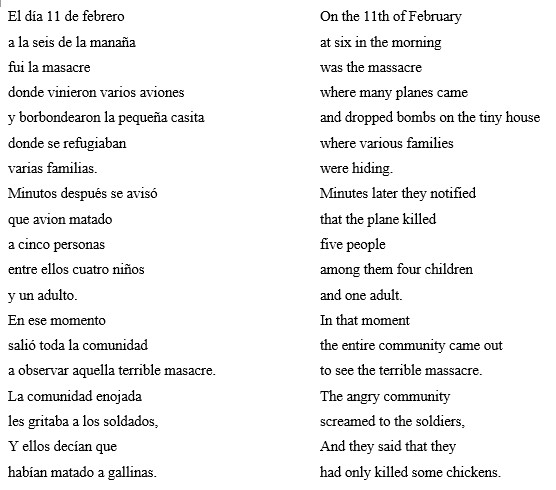 Though simple, the lyrics communicate a great deal about the events of that morning when a bomb was dropped onto a house near the center of this rural community. Of particular significance are the final four lines where the song describes how soldiers responded to community members who had run to the site to offer aid by blatantly lying. Around them were five dead community members, four of whom were children, and yet the soldiers attempted to shoo the gathering away, saying that they had only killed some chickens. Soldiers became increasingly belligerent in their own defense and fired their weapons at the community members who were outraged by such a lie. As Margarita explained, the flippancy of the soldiers’ response belittled the magnitude of their actions and the consequential loss of five lives. It is interesting to note that the song does not seem to have rhythm in pronunciation or form, but rather is composed in a conversational manner. Adding to the clear-cut presentation is a lack of a refrain and absence of word repetition in the lyrics. Both stylistic features of this song make the lyrics less poetic, instead offering a straightforward, more sobering narration of the event.

Music’s role in Ignacio Ellacuría is one that I experienced each time I stayed with the community. One evening during my first stay, I observed a large gathering of people singing popular songs to guitar accompaniment provided by Tonito, the community’s resident music teacher. The gathering was spontaneous as was the initial selection of songs the group chose to sing, making the unprompted inclusion of “Casas de cartón” and several other civil war-era political songs that much more striking. It was interesting to note the intergenerational component to the casual performance. Teenagers who were not even alive during the conflict sang the same songs with the same fervor, precision and reverence as older community members who had indeed lived through the very events and histories they were singing about. Wanting to gauge the authenticity behind the younger community members’ knowledge of the songs (i.e., exploring whether it was rote memorization or possessing genuine background knowledge), I spoke with individuals and small groups of teenagers about the events that had inspired the musical arrangements. In these conversations it was evident that the histories of the town, the country, the individuals who were lost, etc., had been recounted in detail to each of them throughout their lives. The continued performance of popular protest songs ensured the survival of a national and local history while cultivating a deep sense of identity and ownership in a new generation of (younger) individuals.

Protest music was created and distributed during the Salvadoran Civil War with calculated goals in mind. Music accomplished what other forms of propaganda could not by affecting the listener in an almost entirely emotional manner. Melodies, chords, modes, etc. were chosen with the purpose to provoke, educate and commiserate. Music distributed during the 1980s through the 1990s provided a national awareness of news and shared grievances that facilitated enough mass organization to finally succeed in becoming a reputable threat against the government and the military. Tactical information, inspiration, condolences and education could all be communicated to a huge audience through music, reaching further than any other form of propaganda. It could not be confiscated like newspapers and pamphlets, and songs could not be silenced like speeches or rallies. Music’s spontaneity made it impossible for the military and government to forbid, making it so stratagem conveyed by lyrics that encouraged and fortified peasant uprising were heard despite the government’s censorship attempts. Popular protest Salvadoran music from the civil war era exemplifies how musicians leverage songs to identify a problem, propose a solution and then rally support to enact change.

[1] The tune swept through Central America during the early 1970s, garnering much acclaim in the music industry and popularity among the masses.

— Kaitlin E. Thomas is an assistant professor of Spanish in the Norwich University Department of Modern Languages. Her research delves into U.S. and Latina/o/e identities that are resulting from trans-border cultural and national fusion, undocumented Latina/o/e immigration and the contemporary U.S.-Mexican border region. She is interested in intersections between social media and cultural iconography as well as exploring music and graphic narratives as sites for resistance. An original version of this article appears in the Delaware Review of Latin American Studies (available here).