Weaponizing the climate crisis: The nexus of climate change and violent extremism 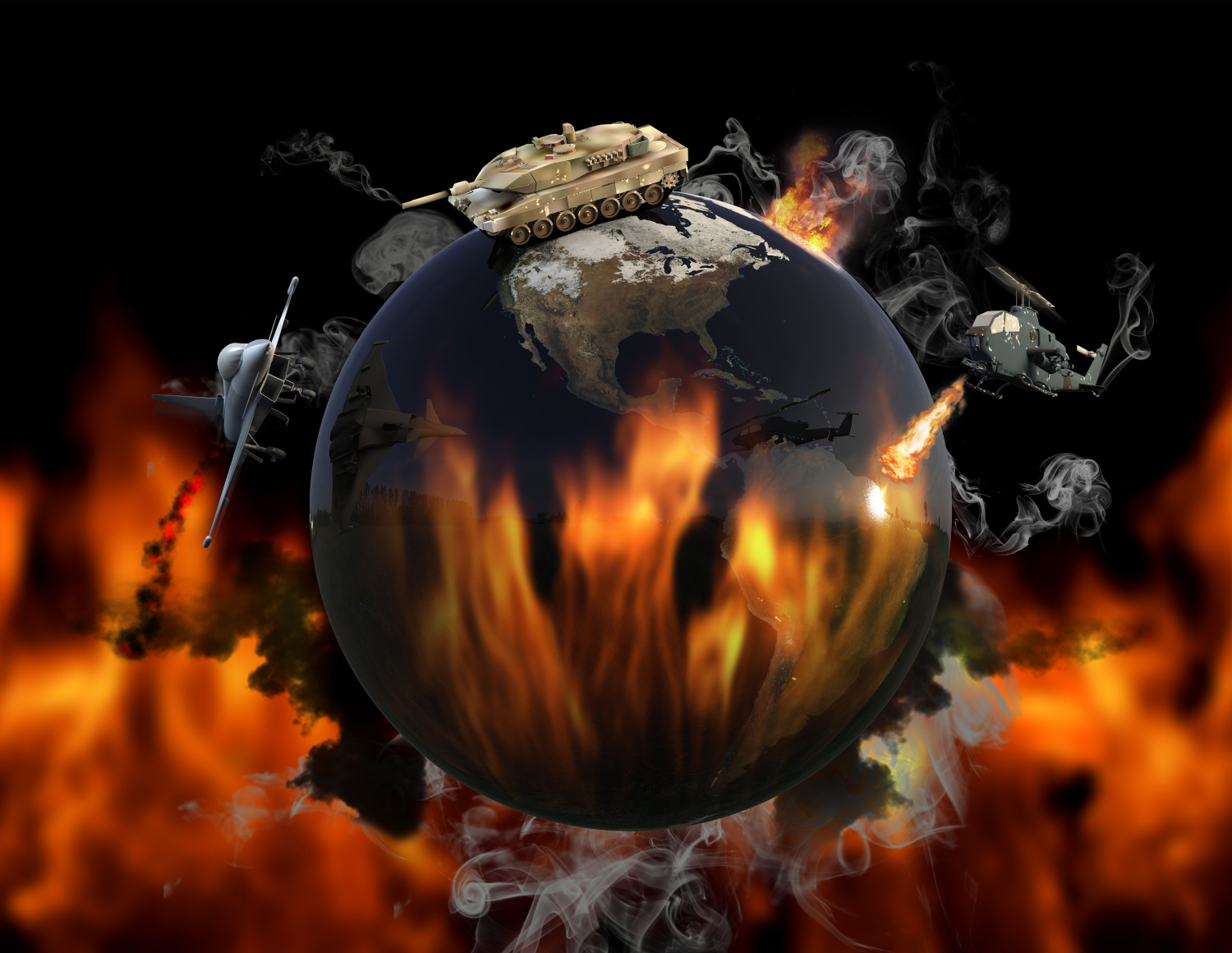 Climate change-fueled violence is already a common occurrence in the developing regions of Africa, Central Asia and the Middle East. In areas with an active presence of violent extremist and terrorist groups, violent conflict has been exacerbated by a multitude of environmental risks caused by climate change. These include, for example, droughts, wildfires, food and water scarcity, floods and rising sea levels, urbanization, overpopulation, displacement and climate migration. Environmental risks and tensions arising from resource scarcity can function as drivers of violent extremism. In turn, violent conflict destabilizes regions already affected by climate change. This further aggravates environmental degradation and disrupts local populations’ livelihoods. Combined with common push-and-pull factors such as economic uncertainty, poverty and loss of social purpose, the result is a vicious cycle of climate change-fueled violent conflict and conflict-fueled environmental damage.

In war-torn countries, governments do not have the resources to combat climate change. Even worse, violent extremist groups exploit environmental disasters, use them to radicalize and recruit, and take strategic control of natural resources. One of the most significant threats to environmental security posed by terrorist groups is related to water scarcity. For example, in both Iraq and Syria, the Islamic State (ISIS/ISIL), a violent Salafist terrorist group, took control of several dams, contaminated drinking water and cut off water (and electricity) supplies in several cities and entire provinces. Other times they flooded farmlands, which destroyed the harvest, killed livestock and displaced tens of thousands of people. These are only a handful of examples of how the weaponization of water, also termed ‘hydro-terrorism,’ poses not only a significant security threat but could also result in a humanitarian disaster.

In the Lake Chad region, inequality, economic insecurity and poverty have been intensified by droughts, deforestation and food scarcity. This resulted in the displacement of 2.8 million people in the Lake Chad Basin alone, which amplified tension and violent conflict over scarce resources. This greatly contributed to the successful radicalization and recruitment efforts of Boko Haram, the jihadi terrorist group also known as the ‘Nigerian Taliban.’ In Somalia, droughts and extreme climate fragility have resulted in ongoing food and water insecurity, famine, climate migration and interclan tension and violence. These severe climate risks became threat multipliers in an already fragile context. The violent jihadi insurgent group al-Shabaab has exploited this situation by sabotaging the delivery of humanitarian aid to maintain food insecurity. To undermine the legitimacy of the government, it stepped in as a service and relief provider: during the COVID-19 pandemic it even opened an isolation and care facility. Ultimately, its weaponization of the ecological environment has become one of its most successful terrorist recruitment strategies. Recruitment efforts have been further ramped up during the COVID-19 pandemic: terrorist groups in sub-Saharan Africa and the Middle East, from Boko Haram and al-Shabaab to ISIS, al-Qaida and Hezbollah, capitalized on the crisis by spreading disinformation, posing as health care and humanitarian aid providers and stepping up terrorist attacks.

Studying the links between climate change, environmental degradation and violent extremism in the developing countries of the global South has received a lot of attention. But climate change does not stop at the borders of developing countries. In fact, one issue that has been less discussed is how extremist groups and, more frequently, political parties are exploiting the climate crisis in the developed countries of the global North.

More and more people find themselves exposed to extreme weather events and wrapped in bush- and forest fire smoke, their houses and entire regions underwater, their highways washed out on their way home from work, and left homeless. As such, the general public has forcefully pushed back against organized climate change denial, lukewarm climate policies, the fossil fuel lobby and government inaction on climate change. Recent international demonstrations such as Fridays for Future, or School Strike for Climate, were joined by millions of people all around the world. The latest Intergovernmental Panel on Climate Change (IPCC) report was assessed by the UN Secretary-General António Guterres as “a code red for humanity.” As a result of the increased frequency and intensity of natural disasters as well as public pressure, climate skepticism or outright climate change denialism is becoming more and more socially unacceptable.

But climate activists and protesters aren’t the only ones demanding action. When governments fail to address issues of climate anxiety, extremists can step in to fill the vacuum. In both the United States and some European countries, extremist groups and far-right political parties have started to blame non-white and minority populations for environmental degradation, overpopulation and pollution. For example, Marine Le Pen, the leader of the French National Rally, has vowed to protect France from immigrants whom she referred to as “nomadic (who) do not care about the environment.” In Hungary, a far-right opposition party, Our Homeland Movement, refers to itself as the only ‘green party’ with a ‘green wing’ (called Our Green Homeland). They regularly engage in environmental and animal rights activism and claim that, unlike the government, they aim to protect Hungarian land from ‘foreign’ land grabs. The white supremacist website, American Renaissance, argues that overpopulation in the global South combined with climate change is “the single greatest external threat to Western civilization,” assessing it as ‘more serious’ than Islamic terrorism or illegal immigration.

The greenwashing of anti-immigration and white supremacist rhetoric as simply caring about the environment can be summed up in the concept of ecofascism. Ecofascist rhetoric relies on the linguistic resources of attitude, persuasion, amplification and obligation. Multimodal forms of visual communication such as images and memetic warfare are also powerful attention grabbers. Linguistic markers of ecofascist rhetoric include branding non-white populations as ‘invading foreigners’ and ‘parasites’ and local minorities as ‘foreign species.’ They are held exclusively responsible for environmental degradation, when, in fact, a recent study found that immigrants use less energy, drive less and generate less waste. Ecofascist ideas are typically clustered together with old Nazi tropes and familiar white supremacist grievances such as immigration, multiculturalism, liberalism and cultural Marxism (among others), constructed as violations of the ‘natural order,’ exploitation of natural resources and ‘white genocide.’

In the most extreme cases, linguistic violence has translated into terrorist violence. Convicted Australian terrorist Brenton Tarrant claimed to be an ‘eco-fascist’ in his manifesto titled “The Great Replacement.” By using different forms of the verb kill 48 times, he explicitly incites violence against ‘enemies’ such as ‘the invaders,’ ‘the overpopulation,’ high-profile politicians and people he considers race traitors. He declares that this will then “save the environment.” In March 2019 he acted upon his violent language and killed 51 people in two separate mosque shootings in Christchurch, New Zealand. Inspired by the Christchurch massacre, American mass shooter Patrick Crusius claimed in his manifesto titled “The Inconvenient Truth” that his attack was “a response to the Hispanic invasion of Texas.” He believed that ‘getting rid’ of “enough people using resources” will make “[the American] way of life more sustainable.” In August 2019 he acted upon his violent ecofascist rhetoric and killed 20 people in El Paso, Texas.

Propaganda research has shown that whoever controls the narrative has the power to manipulate and radicalize target audiences. Ecofascist propaganda has the potential to hijack the climate action narrative by targeting vulnerable populations, especially young people already engaged in environmentalist movements. Looking at the online chatter, that time may arrive a lot more quickly than previously predicted and has the potential to undermine climate security initiatives as a result.

In 2021, when the world is literally on fire, it seems very timely to ask what are we going to do to reclaim the narrative? Building resiliency to ecofascist radicalization, disinformation and conspiracy theories will require an interdisciplinary education that integrates climate education with critical digital literacies and multimodal discourse studies. While climate change-fueled terrorist violence is still rare in the global North compared to the global South, environmental grievances can potentially become tools of ecofascist radicalization and recruitment, alongside other ideologies such as white supremacy, anti-Semitism and accelerationism. In order to counter such harmful narratives, we also need to offer young people nonviolent pathways for participation in current social movements. At the community level, the importance of long-term investment in local community-building programs that offer young people healthy experiences needs to be recognized more widely.

Local community-building initiatives need to offer constructive rather than destructive solutions to complex problems such as the climate crisis. There are already several successful models to take inspiration from. One such positive example is the Resilient Vermont Network, an interdisciplinary initiative by Norwich University’s Center for Global Resilience and Security. It brings together Vermonters, from members of the local communities to academics and policymakers, to build resilient local communities that will be prepared to deal with the impacts of climate change and other hazards in a changing world. Another positive example is the project known as the Kungälv model. This initiative actively countered harassment, bullying and violence in order to root out hate at the local Ytterby school and the community level in the city of Kungälv in western Sweden. Once an active neo-Nazi recruitment zone, the Ytterby school is no longer on the radar of the violent ‘green’ neo-Nazi Nordic Resistance Movement. Researchers evaluating the model also demonstrated its measurable economic benefits: over a 15-year period neo-Nazi recruitment and violence in Sweden would have a €27-million price tag. This is 20 times more than the preventive work of the Kungälv Model, which cost only €1.2 million for the same period.

The price of human insecurity and violence is much higher than investing in prevention. Knee-jerk reactions that declare ‘war’ on pressing societal problems offer instant gratification in short intervals. However, positive impact on local communities can only be measured over time. To mitigate the effects of climate change, community-building programs should focus on increasing climate resiliency and thereby weakening extremist radicalization and recruitment efforts. As Vermont and Sweden demonstrate, prioritizing successful long-term solutions that provide sustainable, nonviolent alternatives to violent extremism is entirely doable indeed.

By Eszter Szenes
Category: Voices on Peace and War
December 21, 2021