I fought off COVID-19. My family, friends and Norwich network helped me. 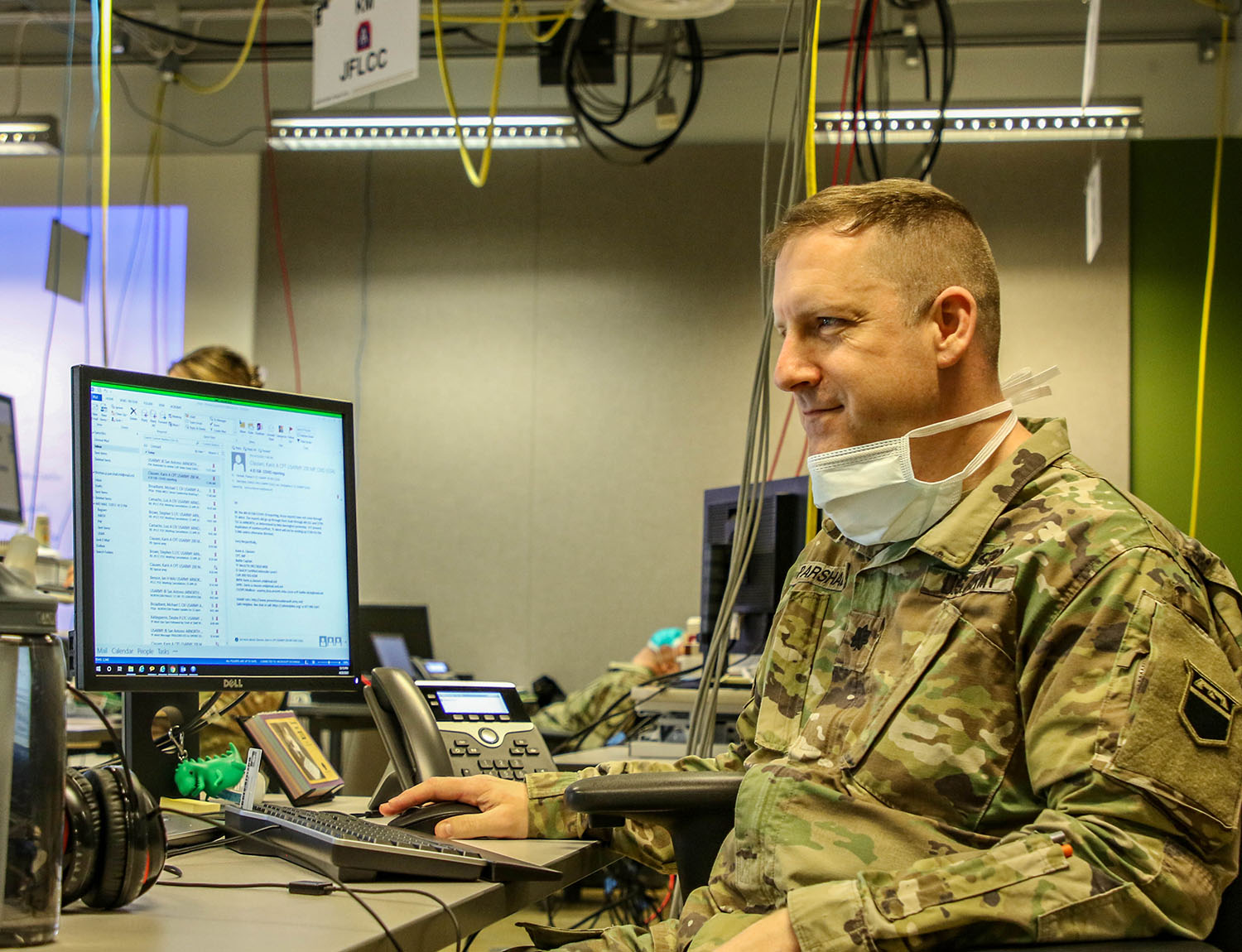 EDITOR’S NOTE: U.S. Army Reserve officer Thomas Parshall ’94 has been part of the Army’s Chemical, Biological, Radiological and Nuclear Response Enterprise since 2013, serving on a mobilization tour in Massachusetts from Oct. 1, 2013, to May 31, 2019. Lt. Col. Parshall describes testing positive for COVID-19 in an essay submitted to Norwich University’s Archives and Special Collections. This essay has been edited for presentation.

My unit was designed to rapidly deploy and conduct command and control in a catastrophic CBRN (Chemical, Biological, Radiological and Nuclear) event, and the scenario we always trained for was an improvised nuclear device; but we also trained to deploy in response to a natural disaster — or all-hazards event. We never thought the event would be a global pandemic.

I was finishing my next-to-last term at Northeastern University in Boston, working toward a master’s degree in homeland security, with a concentration in emergency management, when my supervisor called me March 16 to find out whether I could travel to Joint Base San Antonio to serve as a liaison officer for our task force headquarters.

I said that of course I was able to, if they called me to do so, but that I needed a few days to put everything in order at home with my wife.

There were a few days when I was terrified. But the support of my family, especially my wife back in Quincy, Massachusetts, my classmates and my Masonic Brothers have all helped sustain me through this.

I started my orders March 19 and flew to San Antonio on March 21.

Then, on March 31, I developed a fever and a few other symptoms consistent with COVID-19. So, I packed up my office equipment and left the Joint Operations Center to telework from my hotel room. Testing supplies were limited at the base hospital, so I was considered a presumed positive case.

On April 7, testing protocols were expanded and I was able to get tested; I returned to teleworking while I awaited my results. On April 9, I got the phone call with the positive result that confirmed what I had already assumed, given my fever, coughing and loss of the sense of smell and taste.

I’m lucky, in that my symptoms were, so far, mild. And, at 14 days since onset of symptoms, with no fever and with improvement in my symptoms, I have been cleared to return to my duty location. I’m also participating in a clinical study through the base hospital to investigate recovery from this and other novel infectious diseases — I want someone to benefit from what I went through.

While I was self-isolated, quite a number of my classmates reached out to me through Facebook, thanks to my classmate George Freeman letting them know I was sick.

We held a Zoom meeting for as many members of the class of 1994 as could attend on April 11, and it was great hearing and seeing all of them, even if at a distance. The Norwich bond remains, and we all discussed the way things had been when we were rooks, the changes in the university and the Corps, and what the transition to a new president might mean for the university.

Of course, being Norwich alumni, we were all sure we had the right answers, even if they were different from one another’s.

I’ve been asked if I am afraid. I have to tell you, there were a few days when I was terrified. But the support of my family, especially my wife back in Quincy, Massachusetts, my classmates and my Masonic Brothers have all helped sustain me through this.

Without the wonders of technology we have now, I would not have half the contact I do with the “outside world,” and this would be an extremely difficult ordeal — and I’m not even one of the ones on the front lines, like our health care workers and other essential services.

As I’ve gone through this, yes, it seems hackneyed, but I have kept in mind the Norwich motto “I Will Try” and the Defense Department hashtag #killthevirus.

Have a story to share about how the COVID-19 pandemic has affected you? Consider donating letters, journal entries, photos or videos that you’d like to become part of our historical record. Contribute your stories here: https://bit.ly/2WRiZ3s