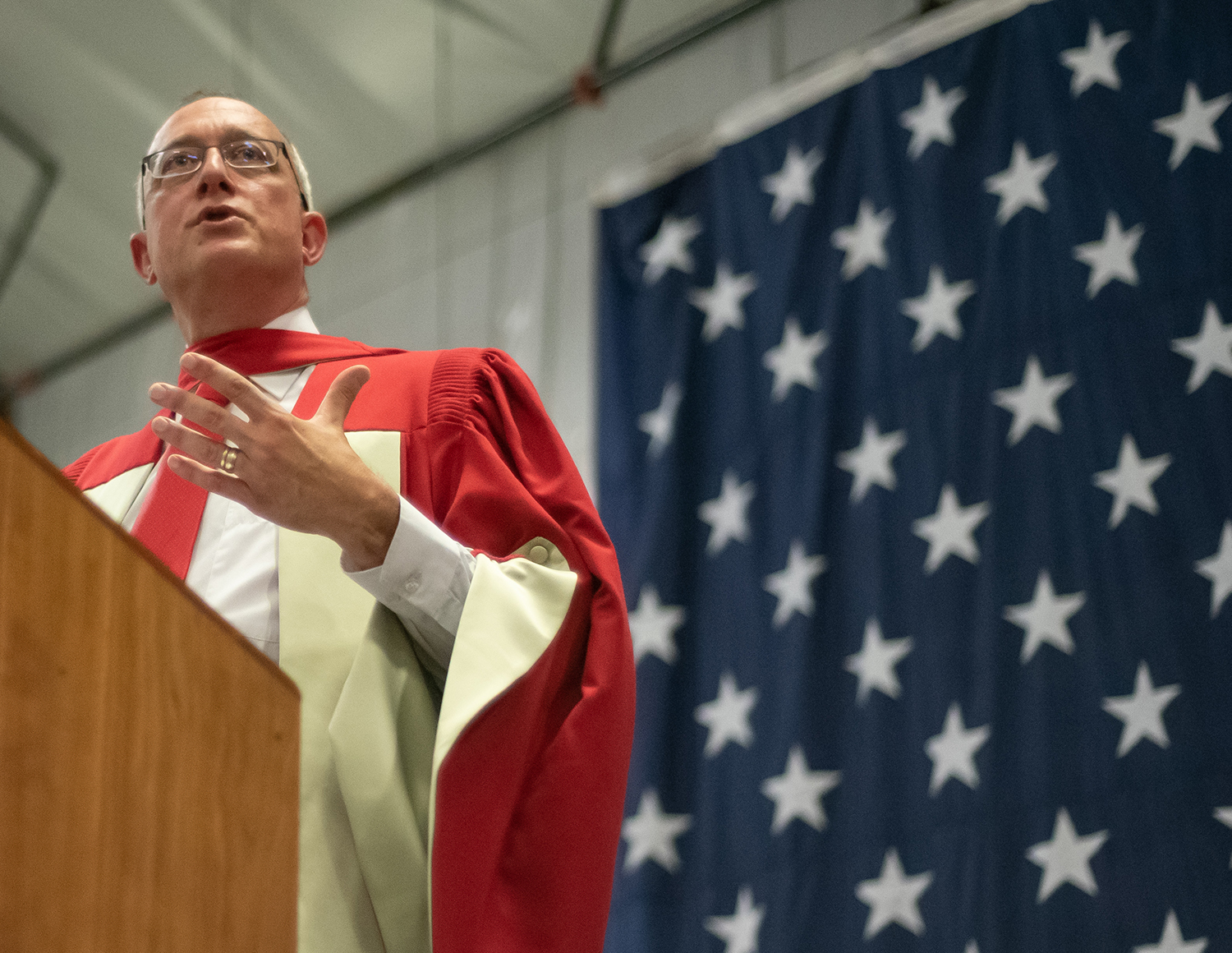 BEFORE I ARRIVED AT NORWICH, I lived and worked for 14 years in Ankara, Turkey. During that time, I watched a beautiful, democratic country descend into autocracy. Right around the 2016 coup attempt, I told myself, when I get back to the United States, I am going do something—however small—to help defend America’s democratic institutions.

I was fortunate to land at Norwich. For me, there was something very attractive about seeking a job here given Norwich’s emphasis on service and leadership. Our university is now celebrating the Year of Distinction on the cusp of its 200th anniversary. I am not sure if there is anything that makes us more distinctive as an institution than this part of our mission. If you have met our alumni, you know that service and leadership are paths to distinction, and we have so many distinguished graduates.

Service and leadership: Dare I say we are having a crisis in America in these areas? Service is ingrained in the American character. President John F. Kennedy called on Americans to ask not what your country can do for you, rather ask what you can do for your country. Americans in the 1960s answered, signing up for the new Peace Corps or the domestic equivalent, VISTA—Volunteers in Service to America. But things started to change that same decade. In 1964, 75 percent of Americans said they trusted government. Today that’s down to 24 percent Twenty-four percent! In the 1960s, 70 percent of graduates of Harvard’s Kennedy School of Government went into public service. Today it’s half that. As Americans, we don’t vote. Maybe 40 percent of voters will cast a ballot in November. Americans volunteer less and less.

Yet, here at Norwich, many of us wear uniforms. In our communities, many jobs require a uniform—police, firemen, nurses. Uniforms are symbols of service. When President Schneider asks for all us in service professions to stand—reminding us that it is one team, one fight—that’s a call to service. To serve something higher than yourself. To serve your community, your country. Norwich clearly has much to teach our fellow Americans about service. How can we today further that service mission and be a model of service for the rest of the country? Let’s start small, and I’ll start with myself. Today, and in the year to come, I will ask myself: What can I do to serve you, my students, my colleagues? I would say: Let us all on this campus seek to “Serve one another.”

“Who will fill the vacuum of service and leadership in American today? Norwich graduates.”

Another part of our legacy at Norwich, our distinction, is leadership. I don’t even know where to start. As an American, I am so discouraged by the level of discourse of our leaders today. So many of you are in leadership positions, soon will be, or aspire to be. My simple question, which I put to you, is: What kind of a leader will you be? What is your leadership style? Yes, you can yell. Sure, you can bully. You can call your subordinates names. You can attack and belittle them in public. You can pit people against each other.

But look at the people on this plat-form: President Schneider, Provost Affenito, my fellow deans. Is that how they inspire others? Is that how they get the best out of the people they work with? Is that how President Schneider has led this university for 26 years—by being a bully? Or is it by treating people with respect and transparency. By expecting the best of people. By being generous with their time, generous with praise. By being able to identify people’s strengths and building on them, empowering them, and supporting them when they fail.

And we have all failed at one time or another—even our leaders fail. Now, how are they when they fail? Do they admit it, apologize, vow to learn from their mistakes, and do better next time? Or do they double down on their mistakes, blame others, lash out, and learn nothing? Because leadership isn’t about you. Leadership is about other people. It’s not about making yourself look good. It’s about making your people look good. And leadership is also about service. It’s about serving other people. It’s about serving your subordinates, your organization.

The importance of service and leadership was made all more poignant to me by the death of Sen. John McCain of Arizona. While I may have differed with McCain on much of his politics, who could deny his service and sacrifice for his country? Who could deny his extraordinary leadership? Five-and-a-half years as a POW in North Vietnam, where he was nicknamed the Prince, since his father was a well-known retired Navy admiral. The North Vietnamese guards loved torturing the Prince, dislocating his shoulders over and over and breaking his thumbs. When offered a chance for early release, McCain declined, as the prisoners’ code dictated that the first man captured was the first released. He demonstrated extraordinary leadership and service to his fellow prisoners. In politics, as a self-styled maverick, McCain put his name on a campaign finance reform bill against the wishes of his party leadership. He spoke out against the use of torture and famously cast last year’s thumbs-down vote against repealing the Affordable Care Act.

His seat in the Senate will be filled. But what about his role as an example to all of us that character, and conscience, and decency matter? His role as a conscientious leader, his life dedicated to the people of his country, his putting country and people over party? His death has created a vacuum of service and leadership. I worry about what will fill that vacuum. The nastiness and venom and name-calling of our current politics? The politics of dividing us against each other based on race, religion, and gender? Where the term “politically correct” has become an insult for simply showing each other basic respect as human beings and fellow Americans?

It is tempting to despair. Looking out on this audience I do not despair, I firmly believe the answer is in this room.

What will fill the vacuum of service and leadership in this country? You will. You will.

We need you. I need you. This country needs you. And as global citizens, I am not exaggerating when I say, the world needs you. Some of you are only 18. I know that is asking a lot of you. You are pulled in so many directions: the Corps, academics, ROTC, sports, family, work, relationships. Now I am asking you to solve the problems of the country and the world. I am convinced all it takes is all of us working together, united, changing things just a little bit at a time.

I am a Theodore Roosevelt scholar. But my favorite quotation is that of Sen. Robert Kennedy when he visited apartheid-era South Africa and spoke to students at the University of Cape Town in 1966. This was his “Ripple of Hope” Speech. He said,

Few will have the greatness to bend history itself; but each of us can work to change a small portion of events, and in the total of all those acts will be written the history of this generation. It is from numberless diverse acts of courage and belief that human history is shaped. Each time a man stands up for an ideal, or acts to improve the lot of others, or strikes out against injustice, he sends forth a tiny ripple of hope, and crossing each other from a million different centers of energy and daring, those ripples build a current which can sweep down the mightiest walls of oppression and resistance.

Those ripples start here, my friends. They start today. They start with you. God bless you. May God bless America. Norwich Forever!

Explore the College of Liberal Arts