The Toxin Detective Will See You Now 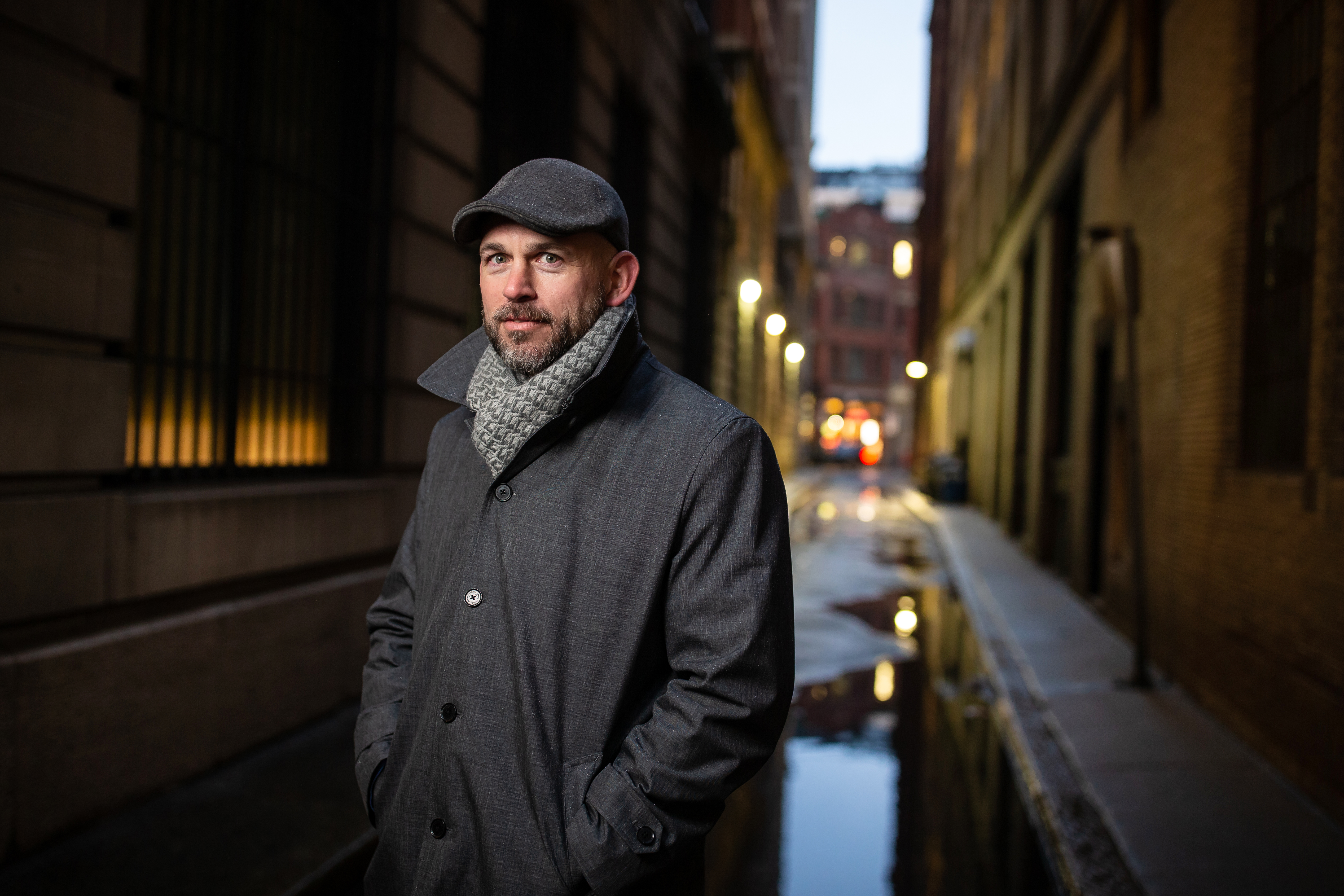 His official job title is chief toxicologist and director of the environmental toxicology program for the Massachusetts Department of Public Health. But unofficially you could call Marc Nascarella ’99, PhD, a people’s scientist.

From his office and lab in downtown Boston, the former USAF airman plays an outsize role in safeguarding the health and well-being of the Bay State’s 6.8 million residents—from the safety of the homes and neighborhoods they live in, to the emissions of the nuclear plants they live by, the fish they catch, the water they swim in, and even the pot they smoke.

It’s a lot of turf to cover, especially the way he does it—with “boots on the ground.” The PhD runs community meetings, takes samples, and speaks throughout the state. Yet, it doesn’t appear to be enough to keep the subway worker's son fully occupied. Nascarella also teaches graduate-level toxicology classes at the state’s top public university (UMass Amherst) and spends vacations volunteering with Doctors Without Borders overseas.

The constant Brownian motion can make it difficult to pin the harried scientist down for more than a quick phone interview. But after a fair bit of nagging, he agrees to meet for coffee at a Starbucks in Allston, just across the Charles River from Cambridge. Nascarella sees me coming and waves through the rain-spattered window.

Sitting with military-perfect posture, Nascarella tells me about a participant in a routine health screening study, whose blood and urine tests showed unusual results. “Thalium is a hard chemical, usually mined with other metals. This guy had really high levels of it. We thought, what’s going on?”

This is Nascarella’s expertise: detecting high levels of chemical exposure in people’s bodies through blood and urine tests, figuring out what environmental issue may have caused the exposures, and reducing them. He scheduled a conversation, hoping for clues to his chemical exposure. He said, “I nailed it. Must be a factory exposure. But it turned out he was the big boss, and his office was far from the factory floor.”

Nascarella kept asking questions. “Turns out, he was a really health-conscious guy—he ran every day. He realized he’d been having a sandwich and chips every day for lunch. He wanted to make sure he was getting his vegetables, so he bought a huge bag of frozen broccoli to keep at work. And every day, he heated up a bowl of broccoli.” Broccoli was the key: His big box discount store sourced it from an area of South America with thalium-rich soil. Case closed.

AS A KID, IF YOU ASKED Nascarella what he wanted to do when he grew up, he would have said join the military or become a scientist. He did both, in an unusual order. In high school, he joined a cadet program, the Civil Air Patrol, and wore his first uniform. Then he enlisted in the Air Force. “I was a security force leader—a cop—on a squad team doing nuclear weapons security.”

After serving, Nascarella wanted to attend college. So he enrolled at Norwich, expecting to get his bachelors degree and a good job after graduation. But then “Norwich opened my eyes to everything else. I’d always loved science, and thought I’d try some science classes.” It clicked. Nascarella credits his Norwich professors with igniting that interest. He followed it through graduate studies, and earned his PhD at UMass Amherst.

But he didn’t shed his military identity entirely. “My boss jokingly calls me ‘The Commander’ because I’ll say, ‘we need to do this, this, and this’”—he thumps a fist on the table between us for emphasis—“and she’ll say, ‘okay, Commander.’”

His position has a broad scope. It encompasses monitoring the safety of recreational bodies of water, contamination levels of hazardous waste sites, and even the areas surrounding three nuclear power plants. He’s also currently running two studies in the field. One is assessing levels of heavy metal in state residents—like the broccoli eater. The other is measuring levels of marijuana in the body of frequent marijuana users.

His marijuana research has yielded surprising results. Compared to other plants, marijuana “hyperaccumulates” metals from the soil it grows in. “Marijuana can take safe levels of chemicals in the soil, like metal, and concentrate them in the plant tissue.” Even medical marijuana—grown indoors, without the use of pesticides, in a fully controlled environment—can contain dangerous levels of metals. Which is why testing for levels of toxic metals is required for all medical marijuana grown in the Bay State. The risks are likely more significant for long-term marijuana users, who may consume plants grown in far less controlled conditions. “In an urban environment, someone might scoop up some city dirt in a bucket and grow plants in their basement.” Over a period of extended use, he says, “that could potentially be really dangerous.”

Throughout the many facets of his job, Nascarella is on the lookout for such dangers, especially ones aimed at vulnerable populations. He gives the example of a contaminated waste site releasing dangerous metals into the soil around it. “Say that site happens to be right next to a housing development. People living there might not have air conditioners, so they open their windows to cool off. There’s a real risk that those individuals, who [may live in certain areas and] already have a disproportionate burden of disease and environmental exposures, now have contaminated dust blowing through their windows, into their homes.” Nascarella tells whoever’s responsible for the waste site to monitor the dust, spray it down with water to stop it from spreading, and test nearby homes to make sure they’ve controlled the problem. “Absent the state looking after those communities,” Nascarella says, “that might not happen. We have a tremendous ability to implement change.”

He’s like a primary care doctor for the Massachusetts population: establishing healthy baselines, doing check-ups, monitoring potential issues, and intervening when necessary. Living in today’s world exposes us to contaminants that we’ve heard about on the news, but we don’t know how scared we should be. Nascarella monitors those chemical levels, and when a pollutant crosses a safe threshold, he acts.

And, because he works in a state agency, Nascarella can effect changes quickly. “The federal government is a really big machine, so it’s difficult to move. And sometimes at the community level, we just don’t have the resources needed to make changes.” At the state level, Nascarella has leverage, but not too much red tape.

I ASK NASCARELLA TO REFLECT on the general status of the environment, expecting a Massachusetts-specific answer. Instead, the toxicologist launches fluidly into a lecture-ready explanation of the global effects of climate change: “We’re seeing more conflict in regions of Africa,” because farmlands have dried out beyond usability, “farmers are running up against herders, and they both have less space,” we’re seeing arms in usually peaceful regions, “and there’s a shift in geopolitical instability.”

While even a locally focused environmental scientist has to follow the effects of global warming, Nascarella knows more than he needs to. I wonder how, and why, he developed that finer expertise. He explains that he’s “a little hyper-focused” on the topic, because he just spent nine days in Geneva at a Doctors Without Borders meeting on the subject. I’m surprised that his Massachusetts job sends him so far afield, and he clarifies that he volunteers for Doc-tors Without Borders. “It’s a fun way to spend a week’s vacation.”

The scientist very clearly loves his work. I ask if he ever got tired of it. “I get tired, but not of the work,” he says. “I joke with my boss that I would literally do the job for free. Of course, saying that never works in my favor.”

I wondered, though, if his work took a psychological toll. He knows so much about the negative health effects of chemicals, and their presence in our food, air, and water. Didn’t that make him anxious? I responded to each of his anecdotes with a new fear, mentally swearing off large bags of vegetables for life, and worrying aloud about dust contamination through my own open windows. (Nascarella reassures me that the dust example was an acute health concern for young children). He mentions a physician colleague who had concerns about heavy metals in raw fish. I ask Marc if he’d eat sushi, expecting a “no.” Instead, he instantly says, “Yes.”

Our bodies, he explains, can tolerate most chemical exposures. He wants to limit the risks of harmful exposures, but he can’t eliminate all exposure. “That’s how we regulate cancer-causing chemicals [in water]—we don’t say they’re not [going to be] present in water. The bigger point is that there’s no such thing as [chemical free]. Even organic produce has chemicals in it.”

I shudder, and say I wish I could move to an island where I’d be safe. “What is safe?” Marc says. “There are chemicals in your body, in everything you eat. Your body has figured out a way to respond to that.”

I ask if there was anything he wouldn’t do because of his work. He knew more about the dangers of contaminants, so he must avoid certain places, activities, foods.

“No, I think the converse is true,” he says. “I have a great deal of confidence in the systems that protect the food supply. I’m a fisherman. I eat recreationally caught fish, and I don’t worry about it. I think understanding those systems is empowering.”

Our meeting over, he gives me a firm handshake, holds the café door for me, and walks out into the rain. It’s after rush hour, and for Nascarella, the end of another day spent working late to keep 6.8 million people safe.

Cambridge-based writer Sarah Ruth Bates has a master’s degree in bioethics from Harvard. Aram Boghosian is a Boston-based photographer who contributes to the Boston Globe and other publications.