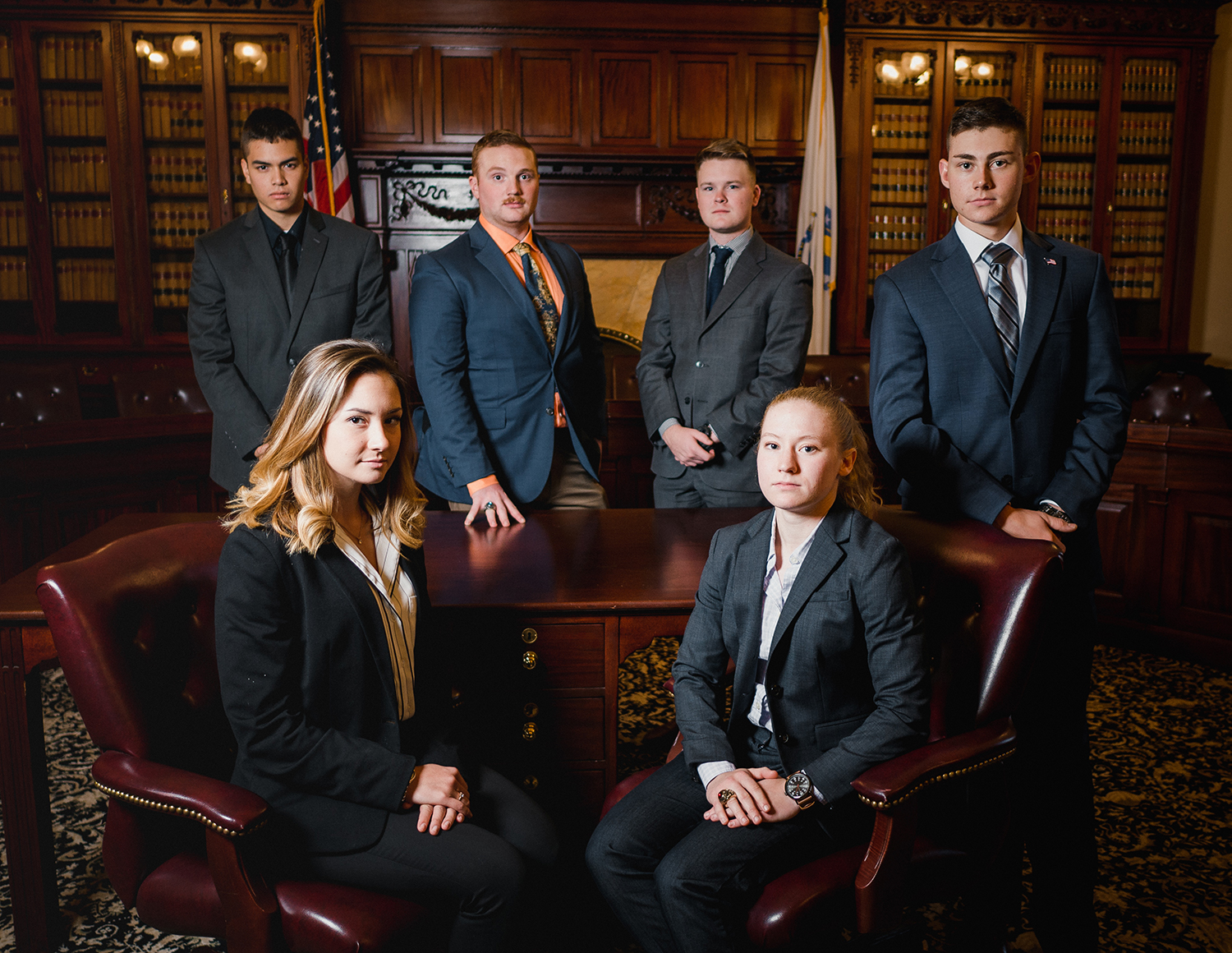 Boston is in ruins. What will they do?

IN LESS THAN 48 HOURS, A MAGNITUDE 7.0 earthquake will strike 40 miles outside downtown Boston along the Atlantic coast. The massive temblor will be felt from the outskirts of Montreal to Manhattan. In Boston, buildings made of centuries-old brick will collapse like cards. Sewage lines will break, gas lines rupture. A river skimmed with spilled fuel will catch fire. Power failures will darken swaths of the state, turning the clock back to colonial times.

Once the earth stops shaking, the crisis begins. At that moment, 6.8 million people will turn to 12 Norwich cadets to help lead them through and forward.

Thankfully the earthquake is just a simulation. Developed by the Federal Emergency Management Agency, it is a table-top exercise in crisis management. The scenario serves as a capstone exercise for the dozen Norwich students handpicked for Boston Policy Week. The experiential learning pilot project is an intensive, four-day dive into state-level policymaking and federal and state agency oversight organized by Professors Yangmo Ku, Travis Morris, and Matthew Thomas.

The interdisciplinary group of political science, criminal justice, psychology, and neuroscience majors is meeting key staff (most of them NU alumni) in the Boston regional offices of the FBI, DEA, FEMA, DHS and Massachusetts National Guard. They are also engaging with elected officials in the Massachusetts House of Representatives and Senate, and staff in the Department of Public Health and the nonprofit MITRE Corp. At night, the students debrief and work on their disaster-response plans.

Tomorrow it will be the FBI, DEA and MITRE Corp. But at the moment, the cadets are in a fifth-floor conference room of the Tip O’Neill Federal Building in Boston’s West End. There, Matt McCann ’94 and three colleagues from the Department of Homeland Security’s Office of Infrastructure Protection (IP) are briefing the upperclassman. The New England regional director touches on the work his office does and some nuances of disaster mitigation and response.

McCann describes his program as a “federal startup” within DHS’ 22-agency federal department. IP works to manage risk and enhance the resilience of key infrastructure, from utilities to harbors. As the 27-year Coast Guard veteran explains, a key component of the work is relationship building.

“A year and a half ago, I didn’t know any of the secretaries of state in New England,” he says. “Now I know them all.” Like his counterparts in other federal agencies, particularly law enforcement, McCann says, “Nothing we do in this environment is a solo act. It’s a team effort.”

Jordan Lutz ’20, Dylan Ackermann ’20, James Reed ’19, and their fellow cadets pepper McCann with questions. How would his office respond to an earthquake? “We are a risk-management agency,” he explains. “We’re not a response agency.” Then he dives into some details as to why “we are all going to have a bad day” if a 7.0 quake hits Boston.

“In New England, we have a lot of unreinforced masonry buildings,” he says. A number stand on shaky foundations. The city’s tony Back Bay neighborhood, for example, is “all fill. These soils have a likelihood of liquefying” during an earthquake. Moving on, McCann notes that Boston has four Level 1 trauma centers. “Where are you going to send people if those are all down because of an earthquake?”

John Robinson ’19 — a political science major and Navy ROTC officer candidate from Tampa, Florida, who serves as a team press secretary — asks about social media. “You need to get your message out there quickly,” McCann replies. “Because if you don’t, someone else will, but put their spin on it.”

What about a tsunami triggered by the quake? asks political science major Aaron Patterson ’19, a Vermont National Guard enlistee from Mount Juliet, Tennessee. “New England has a lot of ports,” McCann says, adding that 90 percent of all worldwide commerce is maritime-based. Cadet Commander Morgan Woods ’20 asks about early or common mistakes in disaster response. Before the conversation ends, McCann shares this thought on disasters: “Eighty percent of any incident is the same. It’s the 20 percent that’s nuanced and keeps things interesting.”

THEIR MEETING OVER, THE team heads on foot to their next conference room. This one is seven blocks away at the Massachusetts Department of Public Health, where they meet Marc Nascarella, Ph.D., ’99, the department’s chief toxicologist and director of its environmental toxicology program. In the hour and change they spend together, Nascarella gives an overview of his field and work, pitches students to consider future careers in the U.S. Public Health Service, and runs a brief Q&A on disaster work.

Recent IRL gas-line explosions in the Merrimack Valley, in which 40 homes were damaged after Columbia Gas workers possibly overpressurized gas lines, allows the toxicologist to spotlight lesser-known impacts of such emergencies on public health. In this case, how big commercial kitchens in the area could be affected by the lack of hot water. Without it, bacteria can’t be killed by handwashing. A result is that foodborne disease could ripple through the food supply.

Woods, the cadet commander, asks Nascarella what his chief concerns are in the wake of a disaster. The scientist shares three. “One of my first concerns is people with mobility issues, people in wheelchairs.” If roads are out, how do vans reach them? The same applies to fuel for home heating. Blocked roads mean heavy fuel trucks can’t resupply consumers. His other concern is the water source for impacted communities. What happens if you “own your own well and your septic system is flowing?”

At 5 p.m., Nascarella makes a hard stop in to catch a graduate course he teaches at night. The Norwich crew walks to the nearby Union Oyster House restaurant, owned by Joe Milano ’66, for dinner and networking with area Norwich alumni.

BACK ON CAMPUS, PROFESSOR KU reflects a few days later that programs like Boston Policy Week are powerful because they provide students the opportunity to meet and speak with high-level professionals working in a diverse array of fields. That exposure can change students’ lives—sometimes dramatically, he says. “It has a big impact. Before this trip, and after this trip, their future career path can be totally different.”

Woods is a case in point. A psychology major and ROTC scholar, she plans to commission into the Army after graduation. Longer-term, she aims to earn her doctorate and pursue a career in research psychology. But her Boston experience has introduced some new ideas.

“Managing state emergency response was never a task that crossed my mind,” she says. But visiting her hometown “to learn how my own state responds to…natural and man-made disasters opened my eyes to a level of preparedness that we require from our local and state governments.”

“I had never thought about working in the emergency prevention or management field,” she says. “But now it could be a very real [possibility] for me.”

Jennifer Zarycki ’20, a criminal justice major/forensic psychology minor from Lanoka Harbor, New Jersey, says the program “was by far one of the best experiences I’ve had here at Norwich.”

But the best summation, perhaps, comes from Professor Ku. “Nothing,” he says, “beats experiential learning.”