Building the Next Army Telecom Bundle 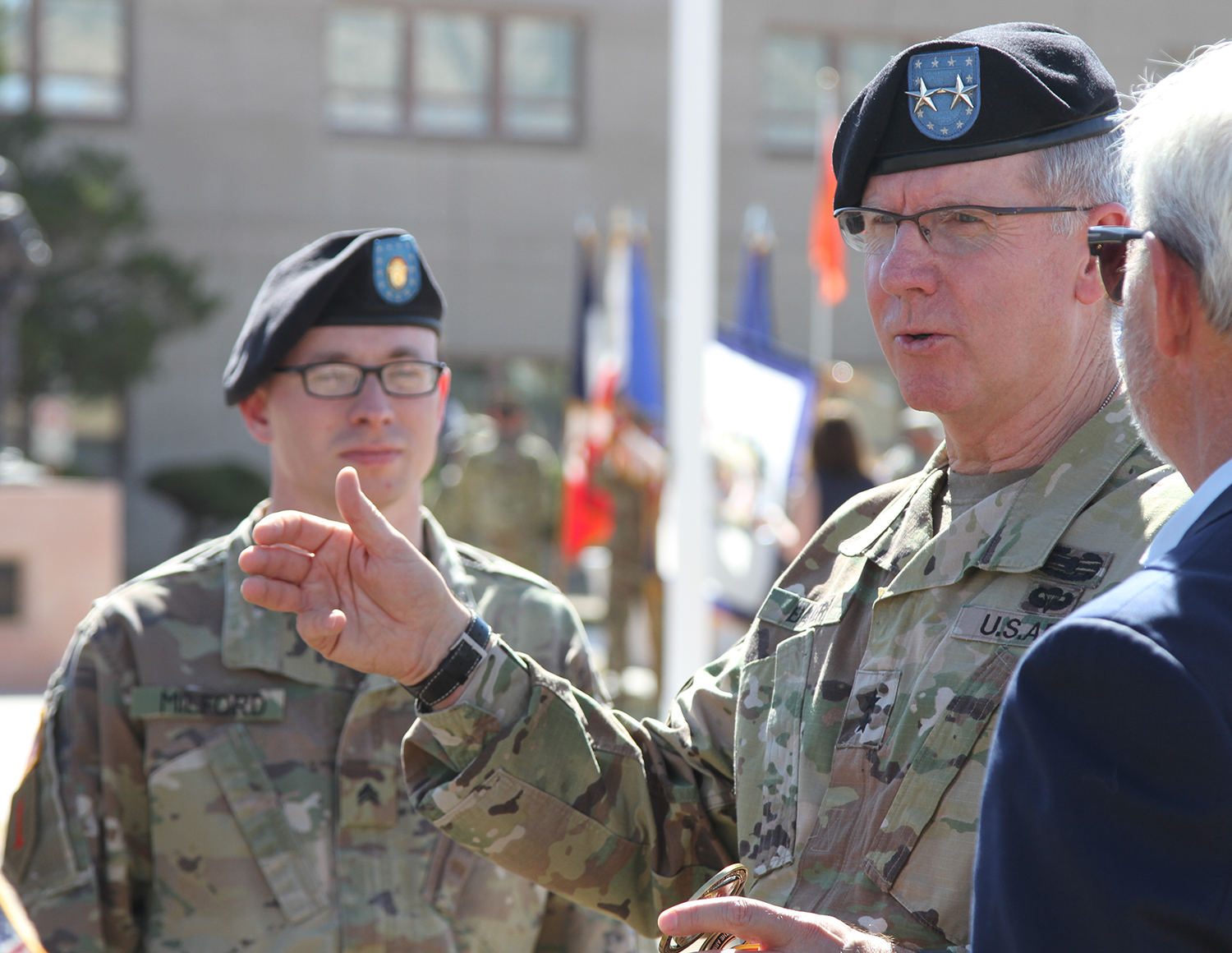 MAJ. GEN. JOHN Baker ’85 will tell you he is a soldier, not a tech CEO. But there is overlap. In 2016, he took command of NETCOM, the Army’s Network Enterprise Technology Command, which handles 60 percent of the Army’s secure telecom and internet traffic. “Every device that you have in a home that allows you to communicate, that’s what we provide.” As NETCOM’s commanding general, Baker oversees 15,000 soldiers and civilians on four continents who operate a sprawling network of satellites, fiber optic lines, software systems, and communications and data centers.

Based at Fort Huachuca, Arizona, more often than not Baker is in the air, traveling to a different time zone, if not continent, to surveil, trouble-shoot, and lead operations. Like any large firm, NETCOM faces significant business environment challenges. Among them, an aging workforce; shopworn technology; cyberattacks; the growing disruptions of machine learning, artificial intelligence, and quantum computing; and how to keep pace with trillion-dollar tech companies (e.g., Apple) on a $1.2 billion budget. “He’s trying to posture the command and, more importantly, the Army for what we believe the next five, 10 years will be,” says Baker’s chief of staff, Col. Tim Norton. Here, the commanding general reflects on his mission, vision, and leadership style and what he learned as a Norwich cadet.

NETCOM has an aging workforce approaching retirement age. How are you dealing with that challenge and others?

I see them as opportunities. We introduced a program, for example, that hires a hundred interns in alternating years. The majority of them (150), are electrical engineers and computer scientists primarily. We’re doing that so that in the next decade, as they choose to continue serving, we’ll have a workforce that has a stronger understanding of the type of architecture that we’re going to be employing. By bringing in people with very good STEM skills, I am changing the structure of the NETCOM workforce over time. These people can help us understand the benefits of machine learning, develop deep-learning algorithms, and incorporate the artificial intelligence advances that are starting to see some success. Eventually, we’ll transition our architecture from one that is software-defined to one that is based on the physics of quantum computing.

Quantum computing is the next big idea in IT. Because you’re using essentially quantum physics to generate your computational power that the network will be driven by. With qubits, you can have any factor of a combination of numbers — and it’s infinite. Right now, our networks are based on binary codes of ones and zeros. There is an (inherent speed limit) based on those ones and zeros. When you get to quantum computing, you’re using qubits that can have any value. Your computational power increases exponentially. I’ve done just a little bit of reading on quantum computing, and I’ve had several briefs on it. But I can tell you that it has caused me to think much more deeply about the benefits that we can see from using that in our networks to help us maintain security and increase speed.

How about machine learning?

Right now, a lot of our tasks require some amount of interaction with individuals. Every time we want to push a patch onto the network, we generally have to have one of our system administrators push that fix or update. A lot of these tasks are repetitive. When I took command two years ago, we set up a data science directorate. Now our data scientists are helping us see where cases are repetitive and where, with the design of an algorithm, we can probably automate a process that right now is being done manually. By automating it, we can both increase the speed in which we do it and decrease the amount of error. As good as our men and women are, they sometimes make mistakes. When we talk about machine learning, that’s what we’re referencing.

As a leader, how do you position your command or organization for success?

I take the long view — both of what the mission is going to require and the structure that is going to be necessary. That perspective is essential in jobs like this. Take a long-term view. Recognize that you can’t predict the future. But do as much as you can to anticipate what that future might bring so you can set your team up for success.

People in jobs like this can be very focused on what’s coming at them next month, in two months. But I’d be cautious, certainly, if I was mentoring and coaching people with that kind of short-sighted view. Because at this level, in an organization that’s got responsibility for 15,000 people spread across many continents, it’s essential that we are looking two to five to ten years out as we set the conditions for success.

What are you reading at the moment?

I’ve been reading Moneyball (by Michael Lewis) and recently finished a book about the Indian Army at war during World War II. I also read The Economist regularly and Harvard Business Review. My sister told me about The Economist some 25 years ago. I find it to be a fairly neutral magazine. Every quarter, they publish a technology review. I think that’s been helpful in my career and I also enjoy their book reviews. I like history and technology, so the books they recommend I usually end up reading. I’ve been reading Harvard Business Review for probably the last eight or nine years. I began when I was promoted to general. I wanted a magazine that would help me understand some of the more nuanced issues of executive leadership.

Speaking of which, what enabled you to be as successful as you have been in your career?

I’ll tell you two words: Laurie Baker, my wife. I met her in Germany. She was a Defense Department schoolteacher. When I married Laurie and we started having children, I think it only increased my desire to serve in the Army and to do as much as I could to benefit the men and women whom I had the honor of either leading or serving with.

I think I am direct in my leadership. I ask people to take on tasks. I give them a vision of what I’m trying to achieve and let them go and accomplish it. I also lead from the front. So I do not spend that much time in my headquarters and haven’t throughout my whole career. I’d rather be out among the men and women of my units — whether it was as a company commander visiting my communications teams up on hilltops in Germany or as a battalion commander in Iraq, driving around central Iraq with my security patrol visiting our different small signal elements. Today, I’m only in my headquarters at Fort Huachuca about five days a month. I have a global command and try to be among the units and the men and women of our command (around the world) — Korea, the Pacific, Europe, Southwest Asia, across the United States.

I think the other aspects of my leadership style are empathy and a strong belief in the value of treating people with dignity and respect. I try to give the men and women of my command, the people I’ve worked with over the decades, as many opportunities as possible to allow them to be as successful as possible.

What did Norwich teach you?

I think the first thing I learned was you’re going to have to work hard to contribute. With that work come opportunities. With those opportunities, potentially you could be selected as a leader. That’s what I saw at Norwich. Whether it was in the Corp of Cadets or on the lacrosse field. You were there to study and to get an education. But you were also given lots of opportunities to demonstrate potential in other ways. You just had to work for them.

By the time I graduated, I think I had at least a good understanding of what it was going to require on my part to be a successful junior leader. I took that understanding with me as I became a tank platoon leader in A Troop … in the 3rd Cavalry Regiment. It was me, 15 soldiers, and our four tanks. That was certainly new and exciting for me. But it was not the first time that I had led 15 people. It certainly wasn’t the first time I had gotten four people to work really close together as a cohesive team.