On the Scene of the Crime 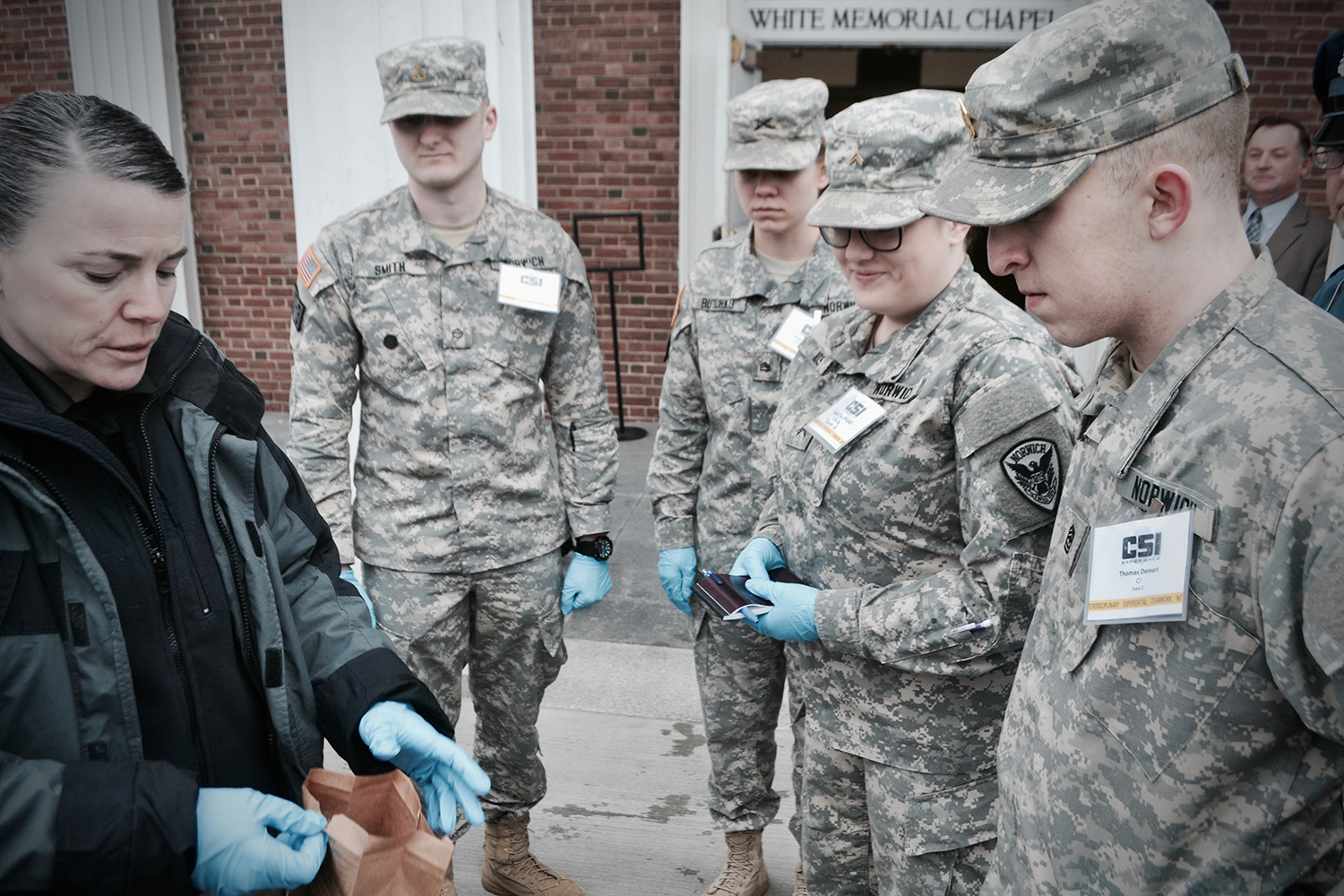 Student teams competing in the new Norwich CSI Experience vie against each other and the clock to solve a mystery involving an elusive figure named Big Mike.

It began with a traffic stop, followed by two arrests. The persons of interest lawyered up. Authorities impounded the vehicle, a 2010 Hyundai Elantra. Investigators had little else to go on.

After working through the night, a crime scene investigation (CSI) team led by John Smith ’18 presented a narrative that they hoped would establish probable cause for a warrant to search the vehicle. In their affidavit, they asked a judge “to allow the search of the seized vehicle and all the locked containers and compartments within, the contents of the cell phones of both arrested subjects, any global-positioning-system data from the vehicle or devices within, and surveillance footage from Cumberland Farms.”

The judge denied all but one.

Assistant Professor of Criminal Justice Stephanie Maass, who organized the 24-hour CSI competition, explains why: The request assumed the subjects had cell phones and GPS, but there wasn’t enough visible evidence to support the presence of either. The surveillance footage was also a no-go. “Experienced investigators would just ask the shop owners,” Maass says. Of four items requested, Smith’s team got vehicle access, including locked containers and compartments.

For Smith ’18 and his partners, it was all part of the learning experience.

Last fall, Maass began to reimagine the decade-old CSI Symposium. Her idea: Take the event out of the lecture hall and transform it into a full-blown crime-scene simulation experience.

“I’m purely academic,” reflects the young criminal justice professor. “To really work, it needed someone with subject-matter expertise.” That someone was David Sem, a retired federal probation officer recently hired as the Norwich CJ internship advisor.

With Sem on board, things clicked. Maass began shopping the CSI Experience university-wide. The investigation would involve an array of “rooms” that challenged students to look at evidence in terms of chemistry, English and communications, history, psychology, mathematics, and Spanish. To succeed, the teams would need to be interdisciplinary, which would mean buy-in from students outside criminal justice.

For his part, senior cadet Smith didn’t have to look far to assemble his own interdisciplinary team. He quickly rounded up his roommate and fellow CJ major, Tom Demeri ’19, along with Isabelle Moss ’20, Kaylynn Butchko ’19, and Amber Reichart ’19. Not only was Team 2 bent on solving the case—they knew that Tim Weinhold, Corps commander, was also putting together a team, and they intended to beat him.

On the evening of March 28, eight teams—40 students in all—assembled in Milano Ballroom for a debriefing. Each team was assigned a professional mentor. Massachusetts State Trooper Mike Josti, father to Troy Josti ’21, partnered with Team 2. “He never did any of the work for us,” Smith says. “Trooper Josti just guided us in the right direction, smacked us in the back of the head if we were headed the wrong way, and kept us on track.”

Throughout the day, Team 2 navigated setbacks and toiled over mysteries— including an elusive character named Big Mike—and, in a late development, successfully linked a weapon recovered from the Elantra to a bank robbery.

When Team 2 emerged the winner, with the second- and third-place teams nipping at their heels. Smith says his teammates’ initial reaction was joy mixed with a bit of gloating over the defeat of the Corp commander. “First thing we did was look over at Tim.”