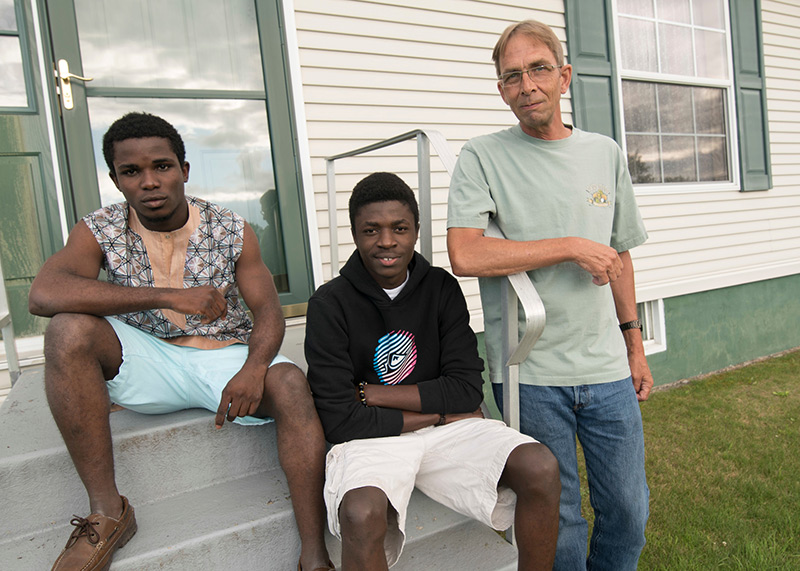 How a simple gesture of human kindness quickly transformed the IT staffer's life and the paths of two promising students from Africa.

The start of college can be overwhelming. But imagine that your first days at the university are also your very first days in the U.S., and it is January in Vermont, and you’re from Nigeria, where temperatures soar above 80 degrees that time of year. Nobody tells you to prepare for the first time your nostrils freeze together when you inhale outdoors—it just happens.

This was the reality for Kenechukwu “Kene” Onwe ’21 when he arrived at Norwich University this past January to begin his architecture studies. During his first days in Vermont, he wanted to call home to let his family know he was safe and well. Unfortunately, Kene didn’t have a working phone, so he paid a visit to the university Help Desk.

There, he met Allen Gagnon, a senior user support specialist with Norwich’s Information Technology Department who offered him the use of the office phone. During that encounter, Allen began to see that all wasn’t well in the student’s life. “I just got this feeling that something wasn’t right,” he explains.

So he made a point of reconnecting with Kene, and learned that the 19-year-old was facing serious financial challenges. His sponsor had backed out at the last minute—a sponsor is a third party who agrees to help with tuition, room, and board. He desperately wanted to work, but a delay in processing his Social Security card also delayed his ability to get a job. On top of that, his F1 visa restricted how much and where he could work. Kene’s situation was critical and acute. Without help, he would have to return to Nigeria.

“He didn’t like accepting help from me, but I told him he had to,” Allen says.

After exhausting all sources of financial assistance available to international students, Allen acted on advice he received from Norwich senior vice president for student affairs, Frank Vanecek, and started looking at the adoption laws in Vermont. He learned that he could adopt an adult, even though Kene’s family is alive and well in Nigeria. In March, Allen, a bachelor, became a first-time parent. Kene moved into Allen’s Williamstown home. He is now eligible for U.S. financial assistance as well as Allen’s employee tuition scholarship.

Allen expressed genuine surprise at the suggestion that he has channeled the spirit of Norwich University founder, Captain Alden Partridge. As a single man, Partridge adopted George Musalas Colvocoresses, a boy who had escaped Greece after the massacre of his family. George grew up to become a lifetime Naval officer, serving on the Wilkes Expedition and as commander of the Saratoga during the Civil War. The low-key Allen shies away from the comparison, but Kene, who also goes by Samuel, wants the world to know about his adoptive father’s generosity, saying, “He just kept telling me, ‘You owe me nothing. All I want you to do is someday help someone else.’”

After knowing each other for just a few months, Allen and Kene became a family. And in May, the family expanded to three when Allen welcomed Kene’s friend, civil engineering major Emmanuel Adu ’21 from Ghana, into his home. Without the stress of housing costs, Emmanuel is now able to focus on his tuition. “Every single day, Allen’s helping hands motivate me to keep fighting,” Emmanuel says.

Over the summer, Kene and Emmanuel worked six days a week for Benoit Electric on the Norwich construction projects; both have been asked back next summer. During the school year, they will work for Sodexo, Norwich’s foodservice provider. While Allen’s help hasn’t answered all of the financial challenges, he has put their goals within reach, and he remains determined to do everything he can to get his newfound family across the finish line with their education. Most important, he has given them hope.

“We must keep on trying,” Allen says in true Norwich spirit. “We must never give up.”