What I Do: Norwich History Professor Rowland Brucken 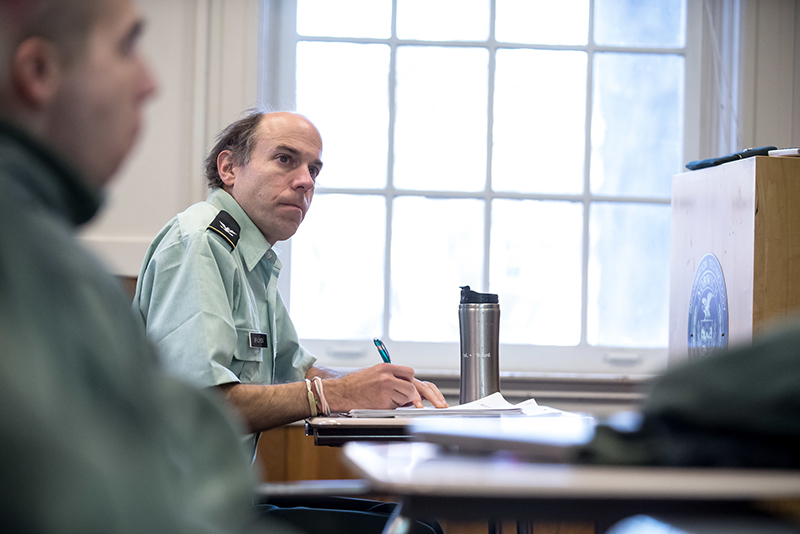 The ultra-runner and human rights scholar discusses his work in Zimbabwe, the country’s repressive political climate, and baseball.

Norwich history professor and ultra-marathoner Rowland Brucken rarely takes the easy path—he is a lifelong Cleveland Indians fan, after all—or the conventional one. During high school, he didn’t start a band, he founded a chapter of Amnesty International. Today, Brucken serves as the human rights organization’s Zimbabwe country expert and testifies on behalf of Zimbabweans seeking U.S. asylum. At Norwich, he teaches courses on human rights and international law, civil rights, and the prosecution of human rights abuses, as well as surveys of U.S. foreign policy, U.S. history, and the history of baseball. Brucken says he strives in the classroom to inspire students to inform themselves, engage with peers, and reach their own conclusions. “If students have the ability and will to do that, then I’m the happiest professor ever.”

What questions do you explore in your scholarship?

The main question around a lot of my research now is, how can societies heal from mass trauma? Whether it’s torture, genocide, systemic human rights abuses, what are the alternatives? What are the options that victims and survivors have? A second, larger question is, how has international human rights law evolved, especially since World War II? In what areas, regions, and times has it been effective in deterring human rights abuses or holding people accountable? In what areas has it been ineffective?

You returned to Zimbabwe earlier this year. What were you doing there?

I gave a paper on truth commissions to a government-sponsored research conference, which was a bit awkward. I also met with civil society groups, human rights organizations, to talk about how Amnesty can best help them given that the next year is probably going to be particularly difficult in Zimbabwe. Lastly—and something unexpected—as part of a transitional justice working group, I gave some feedback to the parliament of Zimbabwe on a truth commission bill that they are now debating. What kind of truth commission to set up in response to past human rights abuses.

You said next year will be difficult there. Why?

There are national elections scheduled for 2018. Whenever there have been elections, the government has increased surveillance and repression of perceived political challengers, as well as human right activists who document human rights abuses. Also, the ruling party might implode; the opposition party is relatively fragmented; and the economy has bottomed out. All of those make for a very uncertain campaign. The government with a monopoly on violence can act unpredictably and arbitrarily in employing torture and detention, among other weapons.

How did your interest in Zimbabwe come about?

It started when I studied abroad when I was in college, during my junior year back in 1990. I wanted to go a country that no one in my college had ever been to. I was at a place called Ranche House College in Harare, the capital. But I also ended up hitchhiking all over the country on my own.

What distinguished that experience for you?

Zimbabweans are culturally an incredibly generous and kind people. For example, when you ask somebody here in the United States, “How are you?” They say, “I’m fine.” In Zimbabwe, it translates into, “I am fine—if you are fine.” There’s a communitarian emphasis. I met many Zimbabweans all over the country. People would be cooking by the side of the road. I would just stop off and have dinner with them. They took me in as a college student, a 20-year-old guy who didn’t really know what he was doing with his life. They took me in, and they gave me their food, their wisdom, their hospitality. I’ve never forgotten that. It’s a debt that I can never repay as a human being.

Did you run on your most recent trip?

I did. I did. I forgot that Harare was a mile above sea level. I ran the same distance, but was often out of breath and had to run slow. I’m not one to back down. I just adjust my pace.

Are you still training for ultra-marathons?

I am. I’ve got one more 100-miler left in me. I’m doing two marathons this [year]. I’m looking at doing another 50-miler in the fall. It’s foolishness is what it is.

You study the history of baseball. Did you play as a youngster? Were you a fan?

I played horribly in little league for two years. I grew up in Cleveland, and so I’m a lifelong Cleveland Indians fan. When I was in elementary and junior high school, the Indians would finish last or next to last every year. Rooting for a losing baseball team, it taught me a lot about life. About being grateful for small victories and about loyalty and that every opening day is a new year. So hope emerges every year right in springtime with flowers and trees. Baseball has such rich history. I couldn’t imagine teaching a course on football history that brings in so many cultural, economic, foreign policy, political, race, class, and gender aspects as baseball does.

Interview edited and condensed for length and clarity.