Unraveling the Stuff that Dreams are Made of 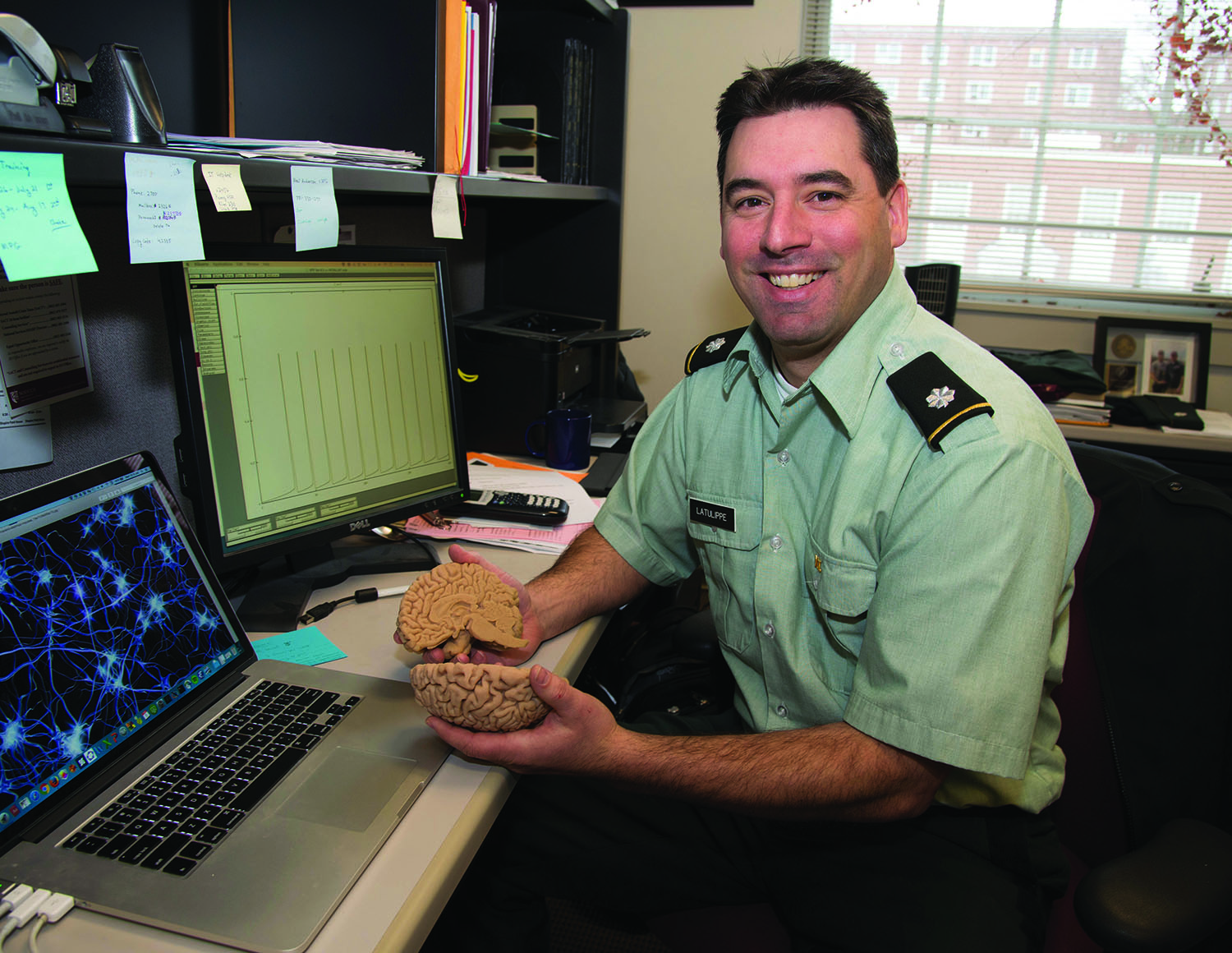 “By shifting my focus to include Alzheimer’s, I am placing myself at the forefront of current research, especially that which uses mathematics to better understand this disease.” – Joe Latulippe, PhD

When associate professor of mathematics Jocelyn (“Joe”) Latulippe first submitted his research proposal as an application for the 2016 Board of Fellows Faculty Development Prize, he didn’t anticipate that he would win. Nor did he imagine that his proposed investigations would yield potentially game-changing ramifications in the field of Alzheimer’s research.

But he did. And they have.

Latulippe’s specialty is mathematical neuroscience: a branch of the discipline that uses computational methods to advance researchers’ understanding of the human nervous system and the mechanisms of neuron activity. In outlining his winning project, titled Modeling the effects of synaptic plasticity on the firing patterns of neurons, Latulippe proposed three key objectives: to develop a working mathematical model that could explain how the brain’s synapses transmit signals from one neuron to the next; to more firmly establish an interdisciplinary community of neuroscientific researchers at Norwich University; and to actively engage undergraduate students in cutting-edge research.

Today, he has not only made significant progress toward those goals—he has also opened a broader investigation into how neurons communicate under the influence of specific organic diseases. The early results of this work place him, and Norwich University, at the vanguard of research into a universally devastating illness.

For Latulippe, arriving at this point was a somewhat happy accident. Although he had earned his PhD studying mathematical neuroscience from the University of MontanaBozeman in 2007, he had drifted away from it in the years since.

After spending four postgraduate years as associate professor of mathematics and statistics at California State Polytechnic in Pomona, he joined the Norwich faculty in 2011 as a generalist. Which is not to say he eschewed scholarship; on the contrary, he has submitted more than a dozen peer-reviewed papers on diverse topics such as differential equations, dynamical systems, perturbation methods, inquiry-based learning and writing in mathematics.

“I came to Norwich because it was a place I knew I could advance my scholarship, and grow as a teacher and a researcher,” Latulippe says.

As it turned out, the Board of Fellows competition reignited his first scholarly passion in ways that have already demonstrated significant promise.

“I’ll be honest; when I considered the proposal I might write, I first thought of my dissertation,” he recalls. “And when I thought about that, I got really excited. There are so many unanswered questions in neuroscience, and so much potential in applying mathematical models to the study of neurons and how they function. I realized that I was ready to jump back in.”

“Biologically, the process of this reaction is extremely complex,” Latulippe explains. “But from a mathematical perspective, it’s simple: a signal arrives at the synapse; something happens; and then a new signal travels to the next cell.”

At its base level, then, a synaptic transmission model is a quantitative tool for describing exactly what happens when neurons fire—and allows researchers to study the effects of certain stimuli, such as light patterns, on that process.

Latulippe’s original intent was to improve upon existing synaptic transmission models through incorporating the idea of plasticity—a term that describes a synapse’s ability to adapt to specific signals. More simply put, he sought to devise a tool that could help explain what variables might strengthen or weaken a synapse over time, and how.

Drawing upon hypotheses originally proffered in his dissertation (A Non-autonomous Phenomenological Bursting Model for Neurons), and with the assistance of a Norwich undergraduate, Latulippe succeeded in developing a “validated model”—one based on known experimental data—that enables researchers to test the behavior of neurons and synaptic transmission under the influence of specific conditions.

And this is where things got interesting: because the link between synaptic transmission and neurological diseases such as Alzheimer’s is inextricable.

“Alzheimer’s is the manifestation of breakdowns in memory, learning, and cognition,” Latulippe explains. “In other words, Alzheimer’s patients experience a progressive loss of synaptic plasticity. We know that one of the hallmarks of the disease is the development of plaques and fibrils known as amyloidbeta (Aß) peptides; what we don’t know is what triggers their development in the first place.” Latulippe’s newly developed model enables investigators to simulate exactly what happens to neural pathways and synaptic transmission at the very onset of Alzheimer’s disease—before the imminent proliferation of plaques and fibrils.

The benefits of such an approach are clear. With the click of a mouse, mathematical models can change the conditions of an experiment by controlling for individual mechanisms, such as the effect of calcium on Aß peptides, at will. Unshackled by the limitations of time or the bureaucracy of human trials, such simulations provide reams of data in the few short minutes—or seconds—it takes to run them.

“By shifting my approach to include Alzheimer’s,” Latulippe says, “I am putting myself at the forefront of current research, especially that which uses mathematics to better understand the evolution of the disease.”

At the conclusion of his project, Latulippe expects to submit two peer-reviews articles for publication: the first, based on a mathematical model that captures synaptic plasticity; the second, characterizing the firing patterns of single neurons.

Along with the student who helped Latulippe develop his model, he has involved four undergraduates in his Board of Fellows project— with plans for more, thanks to continuing support from the Vermont Genetics Network.

“Although mathematical modeling comprises many advanced topics, undergraduate students with a basic understanding of differential equations can become active researchers,” he says. “In my opinion, opportunities like this—to interact across the spectrum of theory and practice—is what undergraduate research is all about.”

Noting the significance of Norwich’s recent addition of a neuroscience major, Latulippe is also working with resident neuroscientist and biology professor Megan Doczi to organize a collaborative community of faculty and students in the fields of biology, chemistry, physics and math. Although a work in progress, Latulippe’s vision for its mission is clear.

“To do this kind of research, you need broad-based expertise,” he says. “Working together through interdisciplinary interactions will put Norwich’s programs at the forefront of desirability for students, and will contribute to a vibrant scholarly environment for our faculty. The way this work is unfolding, there will be plenty of ongoing research opportunities here at Norwich for years to come.”

In addition to his current investigations in mathematical neuroscience, Latulippe teaches undergraduate courses across the mathematical spectrum, including calculus, discrete mathematics, computational theory, statistics and operations research. He serves as assistant coach of the men’s lacrosse team; holds a 2nd-degree black belt in Akido; enjoys painting and drawing (some of his work is on display at Norwich); and makes time for “fun” side projects with colleague Dan McQuillan. Currently, the duo is preparing a paper, How to shovel snow all winter without lifting, that demonstrates, through physics, a safer approach to moving the white stuff.

“I value being well-rounded, and am always seeking opportunities to grow as a person, teacher, and scholar,” he says.