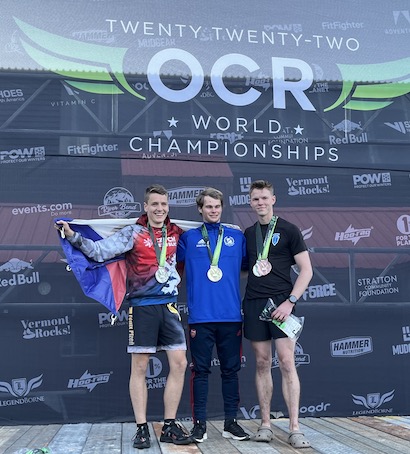 NORTHFIELD, Vt. —Norwich University’s Cadet Gabriel Gaetz, class of 2023, spent this past weekend competing against over 400 athletes from around the world at the 2022 Obstacle Course Racing World (OCR) Championship in Stratton, Vermont. Gaetz finished 3rd in his age group (18-24) and 36th overall with a time of 2:08:43.

Gaetz, a member of Army ROTC and member of the Army Ranger Challenge Team, was the first American to finish and the only person from the United States to make the podium. Gaetz qualified for the world championship by finishing first place in a U.S. qualifier race earlier this year.

Since its inaugural event in 2014, the OCR World Championship has served as the premier independent world championships for the sport of Obstacle Course Racing. The three-day event features five different races that accommodate a variety of athletes. The events flagship 3K and 15K distance races are only open to qualified age-group and professional athletes.

Gaetz won the 2021 OCR World Championship in the 18-24 category. He was featured in a YouTube video this past January where he talked about his efforts and inspiration.