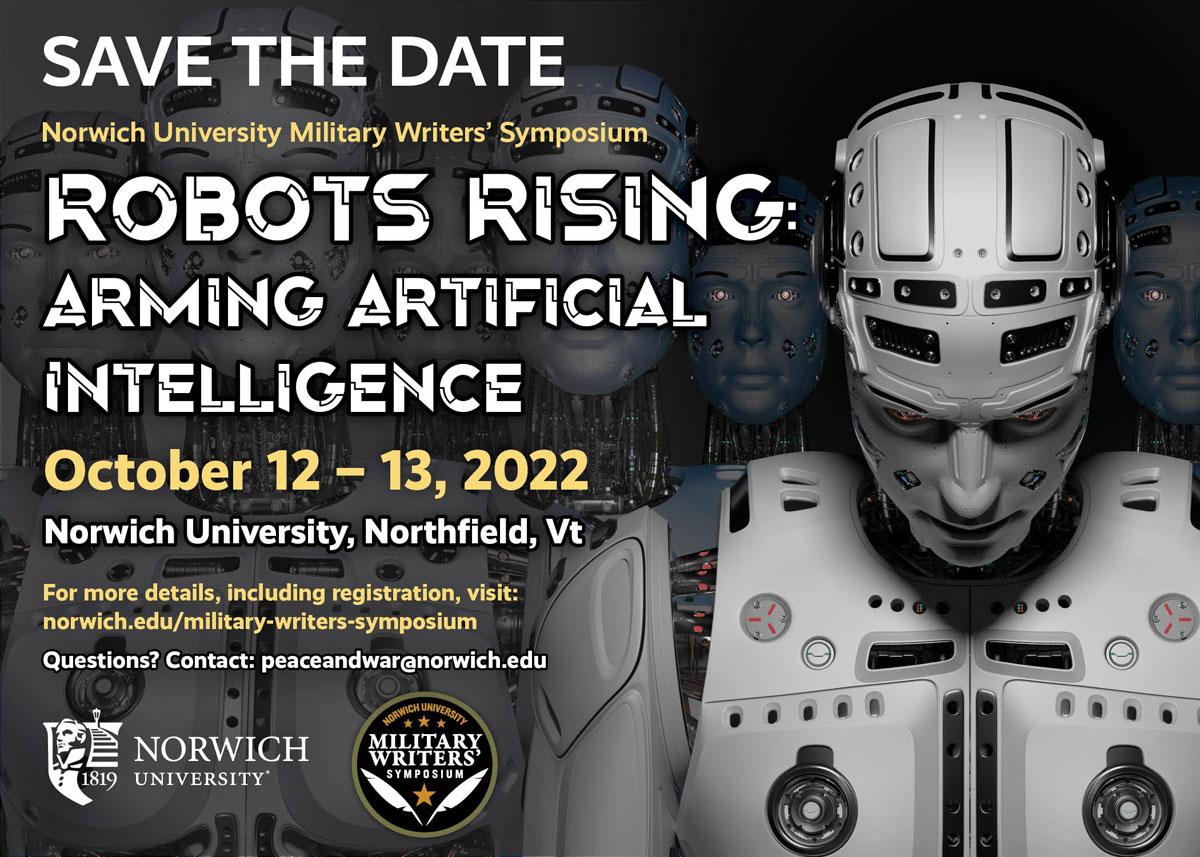 Warfare has changed – combat is no longer relegated to singular battlefronts or even to the kinetic world. Battles are now fought block to block in city streets, in the air without pilots, in cyberspace and very likely, in space. What was once science fiction is now reality. Among all these changes is the unprecedented advancement of robotics over the past ten years. Rapid developments in artificial intelligence (AI) have created new possibilities for robotic applications. Artificial intelligence systems and robotics are being adopted across many sectors of society, to include infrastructure, business, security and defense applications. How do we combat against bad actor hacking of essential infrastructure functions? How does the deployment of artificially intelligent robots armed with the latest lethal weaponry alter the current and future battlefield? What are the concerns of AI networks in direct combat with other AI networks? What ethical concerns come with allowing these types of systems to run wild?

The 2022 Norwich University Military Writers’ Symposium will examine the good, the bad, and the ugly of the rise of robotics and artificial intelligence as a force multiplier from the perspective of some of the globe’s leading experts in the field.

Symposium Highlights include: a presentation at 11 a.m. Oct. 13 in Mack Hall Auditorium by 2022 Colby Award recipient Wesley Morgan for his book “The Hardest Place: The American Military Adrift in Afghanistan’s Pech Valley,” (Random House, 2021) the story of one of the 21st century's most unforgiving battlefields and a portrait of the American military that fought there.

Morgan has covered the U.S. military and its wars in Afghanistan and Iraq since 2007, when he began embedding with combat units as a 19-year-old freelancer. From 2017 to 2020, he covered the Pentagon for Politico, and his reporting has appeared in The Washington Post, The New York Times, The Atlantic, and other outlets as well as in Michael Gordon and Bernard Trainor's book “The Endgame,” on which he worked in Iraq and the United States as a researcher. He's a Boston-area native and a Princeton University graduate.

Another symposium highlight is the panel discussion at 7 p.m. on Wednesday, Oct. 12, in Plumley Armory with distinguished presenters August Cole, Martha Wells, Sharon Weinberger, and Liran Antebi. They join for a panel discussion on the symposium’s theme of “Robots Rising: Arming Artificial Intelligence,” moderated by U.S. Army Retired Colonel Scott A. Nelson.

Find the full schedule here. Live streaming begins at 9 a.m. see the links in the schedule to join.

The Norwich University Military Writers’ Symposium is hosted by the John and Mary Frances Patton Peace and War Center, a Norwich University academic center of excellence for students, scholars, and practitioners seeking to advance interdisciplinary knowledge on the relationship between peace and warfare at local, national, and global levels.