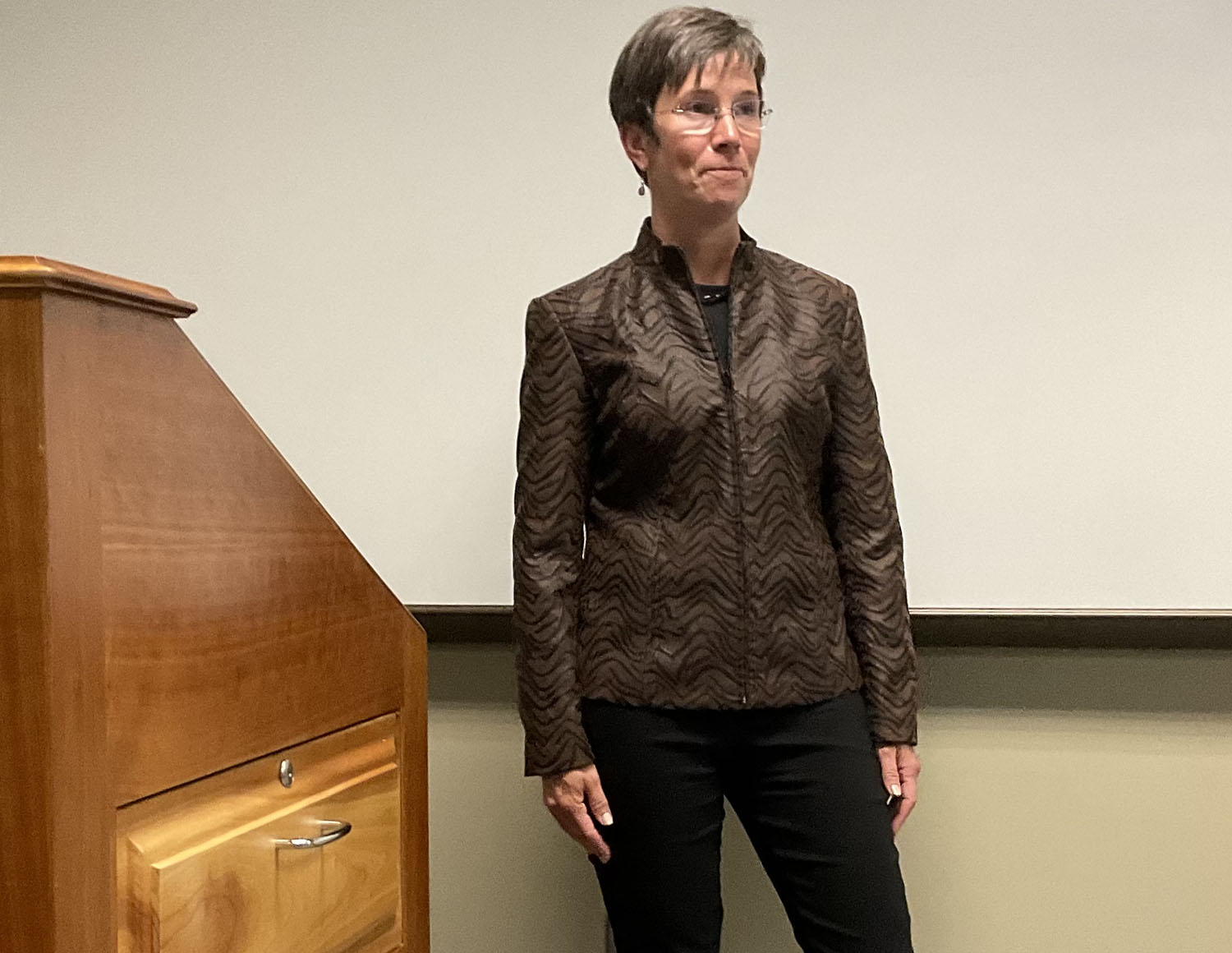 Julie Scribner remembers one of her first experiences as a rook in the Norwich University Corps of Cadets in 1989, when a sergeant major invited her to look to her left and right. One of the three of you, he said, won’t make it to graduation.

Scribner never thought it would be her. But it was.

She’d ranked social life ahead of academics and wasn’t invited back after her freshman year. Four years later, she’d attend Commencement anyway, watching her rook class graduate and realizing she had a choice.

“Do I choose to own up to my mistakes or hide behind them? Do I choose to bottle up my pain or talk to somebody about it?” she said at the Sullivan Museum and History Center in April. “The choices we make can change the outcomes of not only our lives, but other lives as well. And sometimes the most difficult choices require courage — courage to take the leap, courage to turn your back, courage to try something new.”

“The choices we make can change the outcomes of not only our lives, but other lives as well.” Julie Scribner’15 M’19, retired Vermont State Police captain

In true Norwich fashion, she tried, and tried again, realizing a dream of becoming a Vermont State Police officer and rising to captain and commander of the Support Services Division’s Staff Operations section, all while raising two children and pushing for more women in law enforcement.

In 2015, she returned to Norwich, earned her degree and walked the stage.

This past March, Scribner’s advocacy was rewarded as USA Today, Gannett Co.’s flagship national newspaper, named her as Vermont’s representative for Women of the Century, continuing a project that started in 2020 and commemorated the centennial of women gaining the right to vote.

In her Sullivan Museum talk, Scribner, who’s taught courses through Norwich’s College of Graduate and Continuing Studies, traced her career arc and described the power of perseverance.

Scribner recalled a scary incident as a child in Lynn, Massachusetts, when a stranger pulled his car next to her, exposed himself and drove off. Perhaps inspired by the police shows she’d watched with her father (“CHiPs,” “Adam 12,” “The Rockford Files”) she’d had the presence of mind to write down what she could remember of the license plate.

After the Norwich graduation she watched but didn’t join, Scribner married her rook buddy, who’d enter the Army. When the marriage dissolved, she raised the children alone, taking jobs and working dispassionately. She still dreamed of policing, and when she saw a Vermont State Police Academy recruiting ad in the Rutland Herald newspaper, she told a friend.

She was sure she couldn’t attend the academy and raise the kids, but the friend said. “Why don’t you? Why can’t you?”

So, swallowing her fear, she took the exam and advanced. When the Vermont State Police hired her, Scribner’s ex-husband took the kids. He was in Fort Sill, Oklahoma.

“I put my kids on a plane and flew them to Fort Sill, and I had to leave them for months; I wasn’t going to see them on weekends like other parents,” she said. “I was afraid; afraid that I was being selfish that I was choosing a job over my children. But in reality, I was choosing a career, for job security, better pay, benefits.”

Scribner’s family helped her again as her 20-year career evolved and the kids moved back in with her. Scribner bought a house next door to her mother’s house. Scribner worked the night shift in the Bethel, Vermont, barracks and called her mother in the wee hours, the mother would shuffle across the driveway to Scribner’s house to be there when the kids awakened.

Scribner, who has an associate degree in criminal justice from Community College of Vermont, her bachelor in criminal justice and her Master of Public Administration from Norwich University, both through online programs in the College of Graduate and Continuing Studies, said her advocacy for women in policing grew after a 2009 training conference. The meeting, which the Vermont State Police ordered her to attend, was in Saratoga Springs, New York, and launched New York Women in Law Enforcement.

Scribner, who now lives in Columbus, Georgia, near one of her sons, continued pushing for women in law enforcement, joining Vermont Women in Law Enforcement, a group she’d later lead as president.

“We met monthly to build our dream of having a place where women would feel welcome, supported and heard,” she said. “A place where we could find mentors and be mentors, learn about strategies for challenges other people were dealing with, how to better recruit and retain women.”

USA Today honored Scribner for pushing Vermont to become the first state to have its police agency sign on to the 30 x 30 pledge, a national initiative to increase female police recruits to 30% by 2030. As of early January, the Burlington Free Press reported, 133 police departments nationwide had signed 30 x 30, including Burlington and South Burlington police departments, Vermont Fish and Wildlife, Vermont Department of Corrections and Vermont State Police.

Vermont has about 160 female offices in law enforcement, about 13% of the total; 20 years ago, women comprised 12% of state police force. Furthermore, Scribner said, citing a 50-state census by the Pew Charitable Trusts, just 7% of sworn state troopers this year are women. That number is up from 6% in 2000 reported by the federal Bureau of Justice Statistics.

Vermont has about 160 female offices in law enforcement, about 13% of the total; 20 years ago, women comprised 12% of state police force.

Dauting, maybe, but perhaps achievable. Vermont State Police Col. Matthew Birmingham signed the pledge, putting up none of the resistance Scribner had expected.

“The 30 percent goal is not an arbitrary number; it’s chosen on the theory of representative bureaucracy,” Scribner said. “When you reach 30%, that’s when the underrepresented group is able to positively benefit the culture of that group. It doesn’t just benefit the women; it benefits the entire department.”

“There is no end to the opportunities we have to display courage,” she said, “whether it’s a law enforcement officer or a student, a parent, a coach, any area of your life.”