We’ve got your backs, and backpacks 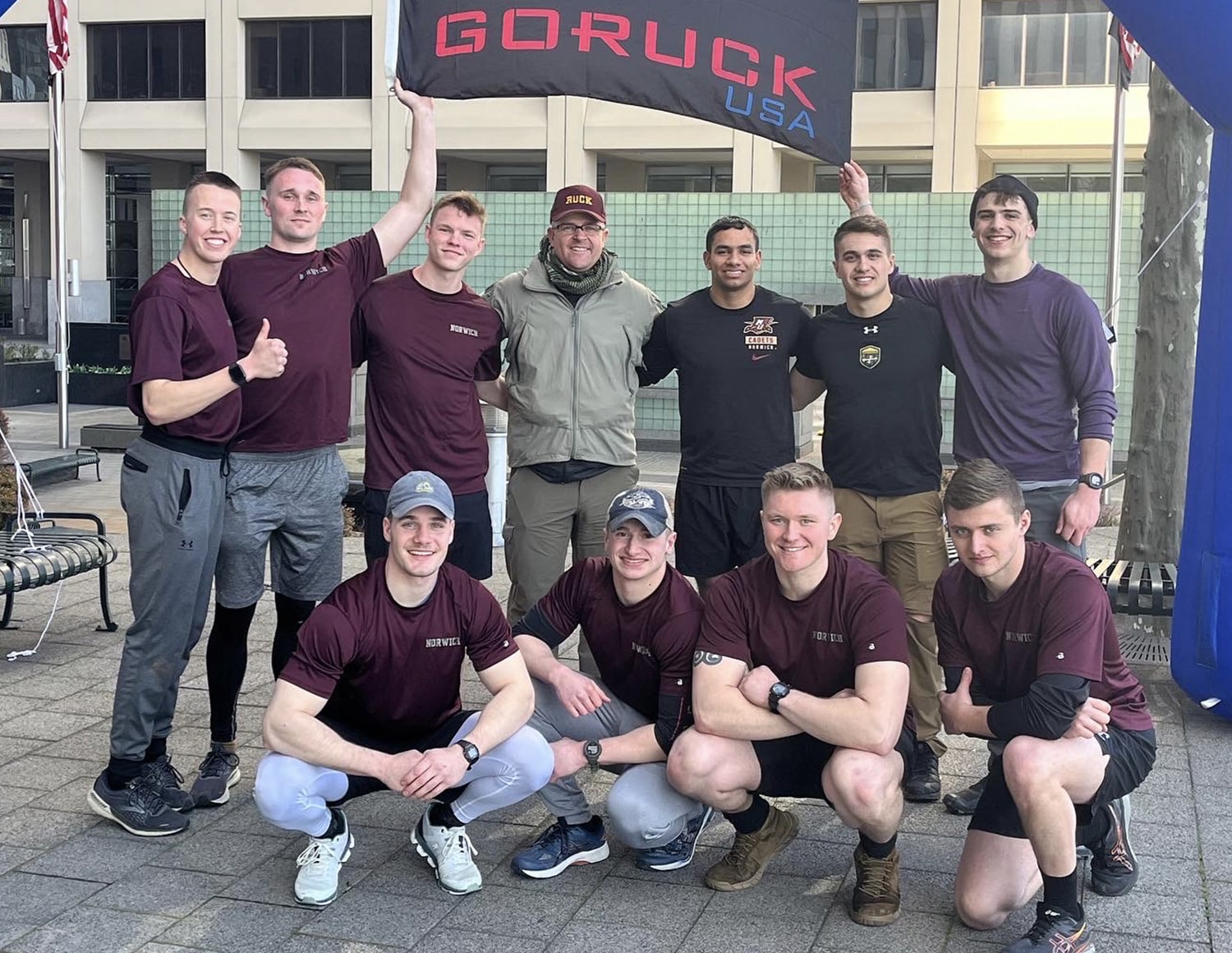 What a way to see New York’s lights, by running all night.

On April 1, 10 members of Norwich University’s Corps of Cadets ran 26- and 50-mile GORUCK races through New York City, lugging 30- to 35-pound rucksacks packed with weights, a water bladder, a headlamp and gear. They downed granola bars and bagels for energy and pushed one another to finish, honoring veterans along the way.

Norwich’s cadets trained thrice weekly for more than three months. On Mondays, the group distance ran, starting at 6 miles and increasing incrementally until they’d reached 14 miles. Some runs were in winter cold; others were on Shapiro Field House’s indoor track.

On Wednesdays, the group did weighted CrossFit workouts. On Fridays, they swam laps in Goodyear Pool.

U.S. Army veteran Jason McCarthy and his wife, Emily, who worked for the CIA, began GORUCK in 2008, partly to show athletes how to operate smartly and safely in harsh environments. As the group’s website says, rucking is foundational in Special Forces training and the Star Course is Special Forces selection’s culminating exercise.

Bryce Sullenger, who graduated in April with a construction management degree and commissioned into the Army, organized Norwich’s teams, raising travel money through GoFundMe. Because the race went all night, there was neither hotel nor hotel expense.

Sullenger, who competed with Norwich’s Ranger Challenge team, counted 28 teams and 80 participants at the 50-mile race’s start; the field thinned as the race progressed and some contestants dropped out. Norwich’s Charlie 50-miler team (Sullenger, Thomas Muraski and Isaias Gonzalez) finished first at 17 hours, 15 minutes and did its long movement from the start point out to Coney Island as its first leg (11 miles).

As with ultrarunner races, Sullenger said sometimes the team speedwalked more than ran, but the goal was maintaining enough energy to finish the course.

In a mid-April interview, Sullenger and his teams said they’d planned to run in the annual Bataan Death Memorial March, an annual ruck race at the White Sands Missile Range in New Mexico that honors service members who defended the Philippine Islands during World War II. However, the lingering coronavirus pandemic forced the race’s cancellation.

So, Sullenger and the others pivoted. Though he offered to refund the GoFundMe donors’ money, none accepted. He and Muraski, a rising junior majoring in exercise science, put the money toward GORUCK.

Muraski said although he’d run a marathon before, he’d never run anything as taxing as a 50-mile ruck ultrarun. The race included some orienteering and involved 19 points in a loop between Manhattan and Brooklyn, including the 9/11 Memorial Pools and the Intrepid Sea, Air & Space Museum.

The 50-milers took pictures at each course point and sent it to race organizers to prove completion. Norwich’s cadets wore running shoes on the all-concrete trails, though they could have chosen their boots. The group averaged 13 to 19 minutes per mile, he said, realizing that 50 miles was farther than they’d thought.

“A big mental thing for us was … keeping each other up, like ‘Hey, we’ll get to the next point, we’ll eat something, we’ll keep on going.’”

Muraski said his team drank water-diluted Gatorade and ate bagels at the suggestion of Maraski’s ultrarunner brother. Every two hours, the runners ate a bagel and some granola bars and energy gels. Muraski’s bagels were blueberry.

“Everyone’s feeling the same exact way as you,” he said. “Everyone’s hurting.”

Gaetz, a national champion obstacle course racer, led the marathon team, enjoying the sights and the bubbling team morale. He bought pretzels from a street vendor to keep his teammates energized.

“I’d never been to New York City like that before,” said Gaetz, a rising senior member of the Corps of Cadets’ Ranger Company who’s also serving in the Vermont Army National Guard. “Everything for me was like, ‘Wow,’ like running through Central Park, running to the Met(ropolitan Museum of Art), Radio City Music Hall. These are things I’ve seen on TV shows but it was like, ‘Wow, it’s supercool to be able to see it in person.’”

Muraski said he’s glad to have finished the race and proud of his teammates. But he’ll avoid bagels for a while.

“I can’t stand the taste right now,” he said.