‘Once the momentum built, the event steamrolled’ 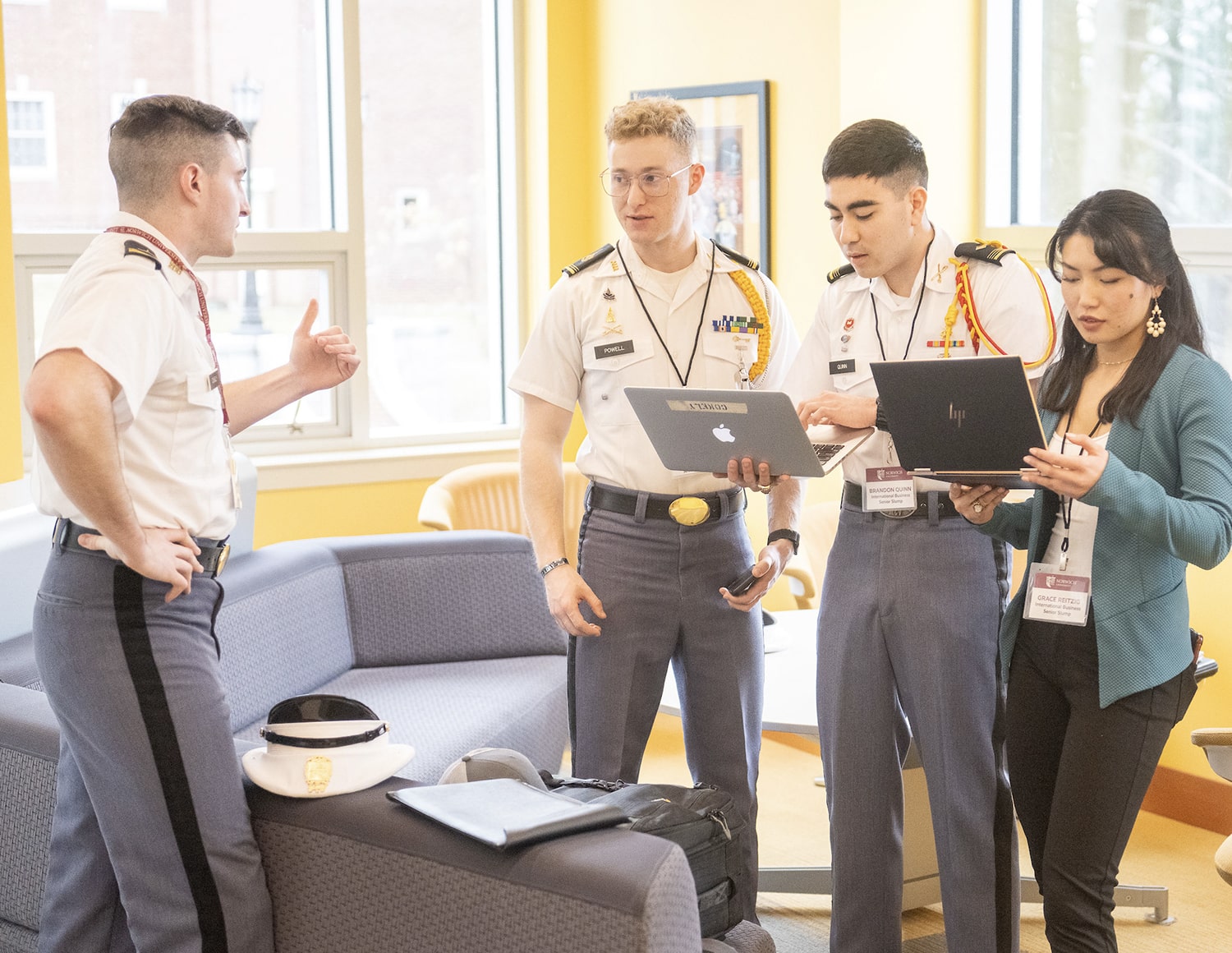 Students entered Mack Hall’s upper-floor classrooms in threes and fours, some dressed in Summer “B” Corps of Cadets uniforms, others in business casual attire — suitcoats with slacks and skirts. They had name tags dangling from their necks; their minds were buzzing with well-rehearsed ideas.

About 80 students were divided into 17 teams for the first Amazon Web Services Business Challenge on March 31. Aided by PowerPoint, they presented their solutions to panels of executives from Volkswagen and Amazon Web Services, answering a business case challenge they had received a day earlier.

The task: create a strategy and narrative to showcase the benefits of Tier I suppliers engaging in an automotive industrial cloud, managed by Volkswagen and running in the AWS Cloud.

“I just had so much fun meeting new people, along with my partners. I really look forward to participating in more events like this in the future. I am hoping we will do this again next year.” Kyle Harrell-Yisrael, Norwich University junior

Presenters were given 12 minutes to show and explain their slides, two to three minutes were given to the panel of judges to ask questions, give observations and advice, and five minutes were allowed for the students to ask questions of the judging panel. All members of a student team had to participate in the presentation. Teams could use financial records and third-party data but couldn’t borrow from one another.

Some team names reflected campus affiliations (Cadlax for lacrosse, ECON 201 for a particular course) or commercial confidence (Greenbacks, Innovation that Excites or Masters of the Universe.) There were also team names with a sense of whimsy. For instance, Blue Tigers, because one student was partial to blue and another to tigers; as well as “Insert Name Here” for a team apparently flummoxed by nomenclature.

David Blythe, an associate professor of management and director of Norwich University’s School of Business, said he and his colleagues hatched the idea for the Amazon Web Services Business Challenge after four trips to a formerly annual 14 school college free-enterprise marathon at the State University of New York, Plattsburgh. He and Norwich Business School Lecturer James Rogler had taken Norwich University student teams there in the past.

SUNY Plattsburgh canceled its competition when the pandemic hit, Blythe said, so, he, Rogler, and Peter Appleton, a visiting associate professor of management saw an opportunity and had a conversation with Amazon Web Services  Senior Practice Manager Keith Gelinas, a member of the Norwich Business School Board of Fellows. Together, they created an in-house competition at Norwich. The business school’s Board of Fellows helped recruit the executive judges, he said; and Administrative Assistant Jessica Amell wrangled student team rosters, organized competition rooms and arranged the awards dinner.

The organizers and Blythe had expected six or seven teams to sign up, but were pleasantly surprised by the high levels of interest, resulting in 17 teams competing.

“Once the momentum built, the event steamrolled. The competition also achieved its goal of being interdisciplinary,” Blythe said, noting that it drew students from 12 majors and all class years. At least one team was all rooks, first year in the Corps of Cadets or freshmen, he said.

“It has just come together, I think, beautifully,” Blythe said on competition day. “The energy feels great, the feedback we’re getting from everyone involved is terrific.”

Kyle Harrell-Yisrael, a junior management major and civilian student, said he was thrilled for his moment on stage to offer ideas on improving business efficiency and cross-channel communication as an approach to solving the business case. He said the experience will help in his studies because now he knows how to build a business case and hone a pitch.

“I just had so much fun meeting new people, along with my partners,” said Harrell-Yisrael, whose team was called Raven Snap. “I really look forward to participating in more events like this in the future. I am hoping we will do this again next year.”

At times, students had to adjust on the fly. After first having to stop short when the 12-minute presentation clock expired, Senior Slump, a facetiously named group of soon-to-commission Marines, had to think fast during the Q-and-A.

A judge asked how the team would adjust if a partner rejected their proposal. Sean Cokely stopped for a moment, then answered.

“We demonstrate that we are proving out a solution,” Cokely, a senior political science major and Corps of Cadets member. “It’s not just the client coming to us and saying, ‘Hey, we really need you, they also need us. So, it becomes a ‘help me, help you scenario.’”

Grace Reitzig, Cokely’s teammate, said presenting reminded her how ideas need to be complete and the importance of a Goldilocks focus — not too broad or too narrow, but just right — to achieve maximum effect.

Cokely talks quickly — so fast that he could cram a barrage of legal disclaimers into a commercial’s final seconds. A judge kidded him about moderating his pace; Cokely joked that he was already talking slowly.

“It was a little intense, but fun,” Cokley said of the presentation, “because we just sort of came up with ideas, spitballing because a lot of us don’t have any experience in … corporate world kind of stuff. It was really eye-opening.”

“We really worked on getting to know each other’s strengths and weaknesses, and how we can really use each other to make our presentation better,” Delisle said, “but also stay in our own lanes and work as a team.”

Verner said though he and his teammates were “nervously confident,” they’d gladly present again.

“Where else are you going to be sitting in a room full of board members and business and be able to express yourself?” he said.

Blythe said he hopes to expand the Amazon Web Services Business Challenge next spring, inviting students from the other five Senior Military Colleges. He said this year’s success reflected the Norwich faculty’s ability to collaborate and consistently prepare students for business, whether military or civilian, and the outstanding support the business school receives from the Business School Board of Fellows.

The competition allowed students to use several skills, he said — presenting and speaking well; articulating ideas and thinking on their feet; as well as addressing challenges.

“When our students leave here from the School of Business, they will be going into an environment where they’re going to be working with people who have different skills and different experiences,” Blythe said. “That’s why an event like this really highlights the way our students are able to adjust, adapt and overcome.

At the awards dinner, Volkswagen Group of America Chattanooga, TN Operations LLC Information Technology Director and Chief Information Officer Knut Hilles hailed the students for their comprehension of a difficult business case, cooperation as a team and courage.

“You took the time, you worked on your presentations, you presented,” he said. “You all won.”