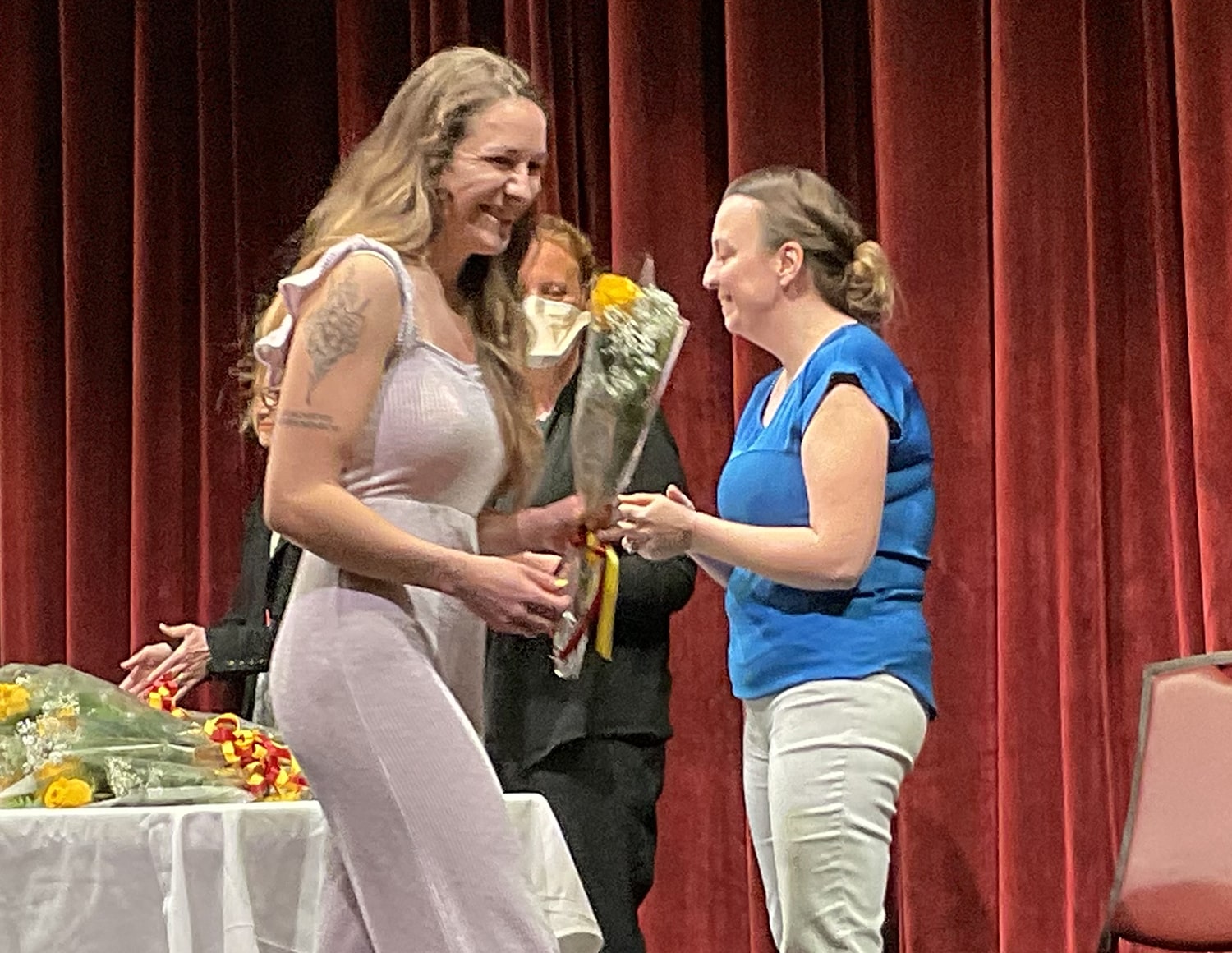 As Norwich University’s Class of 2022 made its final rounds and headed to Commencement and postcollege life, many individual schools recognized students who’d excelled with ceremonies around campus.

He also introduced a new challenge coin, featuring the university’s “I Will Try” motto and described how Norwich has been integral in transcontinental networks. U.S. Army Maj. Gen. Grenville Dodge, a Norwich graduate, became the Union Pacific’s chief engineer, thereby helping birth the transcontinental railroad, the internet of its day.

“The future of the nation and the free world is looking for you to be the Norwich alumni in the tradition of Grenville Dodge, who will use technology … in the struggle against evil,” Battig said.

Lauren Provost, an assistant professor of computer science and cybersecurity, said that to conquer cyberthreats, graduates will need Norwich-style sticktoitiveness.

“You’ll hear me reference several activities (including the National Security Agency Cyber Exercise) that really enforce the notion to be persistent, to communicate, to work as a team through very challenging circumstances.”

School of Business Director David Blythe used a favorite comic strip, tacked to his office wall, to describe graduation’s specialness for parents and grandparents. The strip depicts a child who’s hit a game-winning Little League home run and asks his father whether he, too, had ever hit a game-winning homer. The father says he had. The child then asks if that was the father’s favorite athletic feat.

Charles A. Dana Professor Michael Puddicomb, who has a joint appointment in the School of Business and Management and the David Crawford School of Engineering, described how he hired Blythe (and needles him for it) and told students to do what brings them excitement and joy. Dr. Peter Appleton hailed students for helping him endure personal trials and asked them to carry the kindness forward.

Thomas Yandow, an associate professor of accounting, appeared by teleconference from a golf course way off campus, and told his students to practice ethics, even under pressure to misstate results.

“As you go out in the world, I want you to remember the Honor Code and let it guide your behavior,” he said, “Somebody needs to step up and set the right example, to make the right choices, even if it’s costly.”

Dr. Michael Prairie, an electrical and computer engineering professor explained the Order of the Engineer & Order of the Constructor’s code of conduct, saying the orders expect Norwich graduates to apply technology and unify engineers as they practice. David Crawford School of Engineering Director Dr. Karen Supan said the Order of the Engineers’ roots trace back to 1926, when Canadian engineers hatched the idea of a ceremony and oath for entry and began the tradition of wearing an iron ring on the working hand’s pinkie.

For years, the rings were forged from the Quebec City Bridge’s steel superstructure, she said. Modern rings are now stainless steel. The rings remind the engineers of their responsibility to the public. Professor Dr. Adam Sevi said Order of Constructors members wear the same rings on their pinkies or on neck chains for similar symbolism.

After the students had sworn an oath to practice engineering responsibly, Supan said engineers are entering a decision-making industry poised for progress.

“Technologically, the environment of today is highly sophisticated, highly complex and demands ingenuity to protect the public’s safety, health and welfare, while at the same time improving the quality of life,” she said. “Throughout your professional career, you will stick your neck way out for decision making. But I am confident that you have the technical ability and social awareness to fulfill our creed, pledge and code of ethics.”

The tradition of pinning nurses dates to the 1860s and British nurse and social reformer Florence Nightingale (1820-1910), who transformed nursing by setting new sanitation standards. She received the Red Cross of St. George for her patient care during the Crimean War and then began presenting medals to diligent graduates of the nurse training school she established with St. Thomas’ Hospital in London.

Dr. Paulette Thabault, who completed her last semester as School of Nursing director, congratulated nurses for pivoting to learn from pandemic-forced online learning. Thabault noted that some nursing students had visited Costa Rica on a service-learning mission, staffing a medical clinic for refugees fleeing violence in Nicaragua.

Thabault said the nurses should wear their compassion cords proudly and give themselves silent congratulations for facing a profession bent in unexpected ways by the coronavirus pandemic.

“I believe this has helped you realize just how critical you are as professional nurses to the health care system,” she said, encouraging the students to find mentors and take advantage of programs to help them. “The nursing profession and your future patients in whatever specialty area you choose are very fortunate to have you.”

School of Architecture + Art Director Cara Armstrong congratulated graduates for thriving amid the pandemic, which has grimly entered its third year. This setback-conquering skill will matter particularly now, when world needs good designers the most, she said.

“We are at a moment in history when the word will think, ‘Pay attention to you,’” she said. “Like never before, as leading designers of scale, you, more than anyone else, hold in your hands the answers to the most important questions we all face.”

Tolya Stonorov, the school’s assistant director, said graduation brought the end of college, it also allowed a fresh start, and a way to teach others about climate justice, community organization and how design affects lives.

“I encourage you all as young architects, to take the tools you have learned here and use them to do good with your own work,” she said, “to lift up people around you who need help, and to make the world the place you envision it to be.”