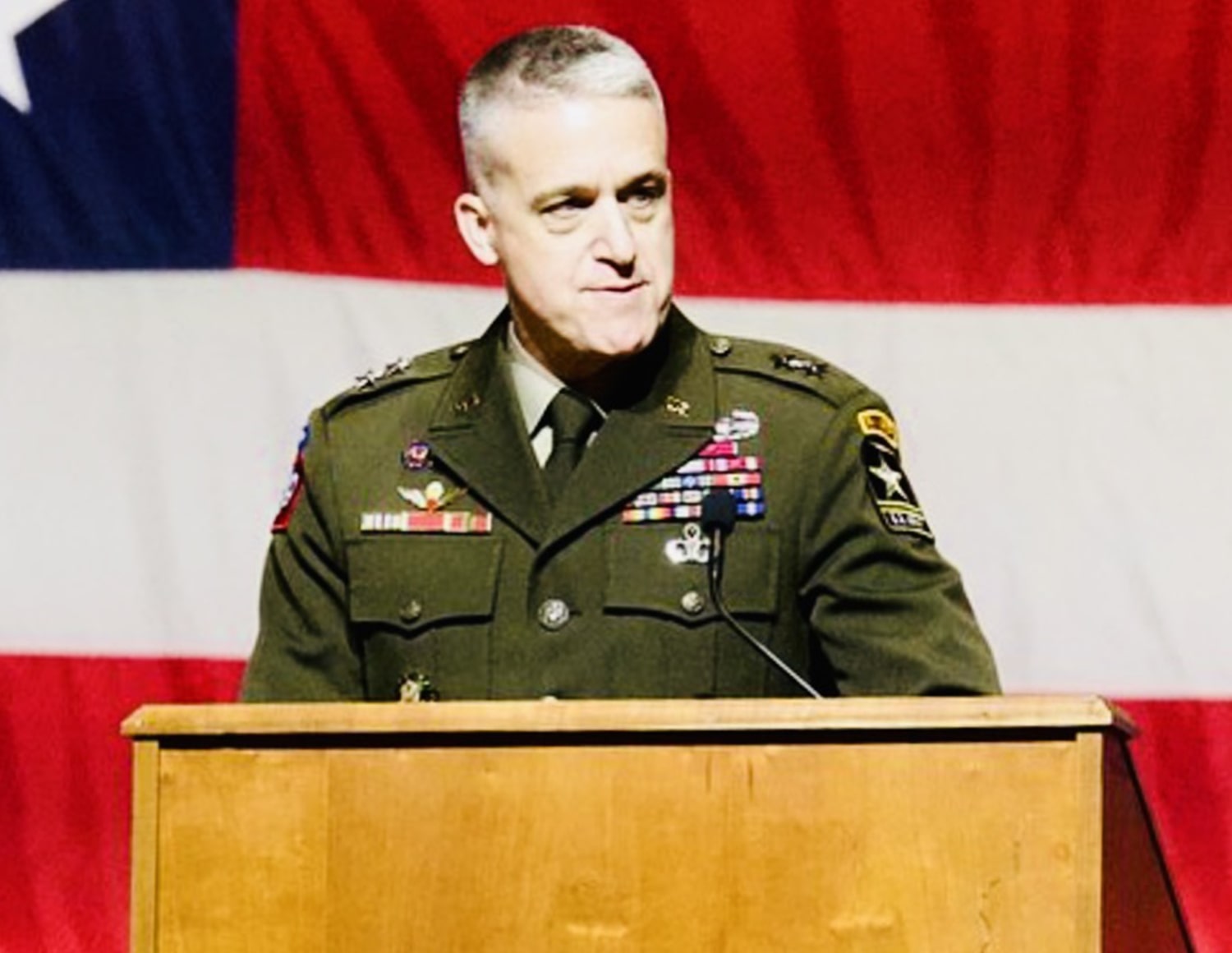 “Take a deep breath … collect yourself, focus yourself,” he said. “Whether this reflection is in 30 seconds or 30 minutes or 30 days, don’t rush headlong into any situation.” U.S. Army Maj. Gen. Douglas Stitt ’90

MG Stitt was a Distinguished Military Graduate at Norwich who participated in U.S. Army ROTC and earned a bachelor’s degree in history. He served in U.S. and overseas assignments, including deployments for operations Enduring Freedom and Iraqi Freedom; his awards include the Distinguished Service Medal, Legion of Merit and Bronze Star.

Woodhouse,  a Tuskegee Airman, earlier this semester visited Norwich’s new flight simulation lab in Dewey Hall and met Norwich students during their Boston International Field Excursion. He received a standing ovation at the Joint Commissioning Ceremony and an audience ovation and shoutout from keynote speaker and U.S. Army Capt. Deshauna Barber at Commencement. Later in the afternoon, at the U.S. Army commissioning, also at Shapiro Field House, Woodhouse would administer the oath to several cadets.

Signaling that being home meant being in a place of support, MG Stitt invited the commissionees to look to their left and right, to acknowledge their many allies. He called commissioning a team event — parents and kin had sent tuition checks and fielded phone calls or text messages as their daughters and sons advanced through ROTC and college.

“Your contributions, your sacrifice and commitment, don’t go unnoticed,” MG Stitt said. “Please be proud of the great gift you are sharing with our nation and be assured that your sons and daughters have a noble purpose and a calling in joining the greatest military in the world.”

MG Stitt hailed the commissionees for what they’d done — excelling at academics, athletics and leadership at the university — and for what they were about to do — serve alongside other top-notch personnel and tackle global challenges. He urged the audience to savor the day and their final moment with their Corps of Cadets teammates.

“You’re going to be called upon to solve problems as part of a team,” MG Stitt said. “You’ve all done that … here within Norwich, but now you’re going to be tested again to build a new team, foster and grow new relationships in an evolving, complex and ambiguous world around you. You’re not going to be alone.”

MG Stitt encouraged the soon-to-be officers to treat others with respect and empathy. Colleagues won’t serve with or for leaders who aren’t compassionate, MG Stitt said; as the saying goes, “They won’t care how much you know, until they know how much you care.”

MG Stitt also urged commissionees to have the courage to acknowledge and own their mistakes and the savvy to think on their feet, considering each new problem with care and calm.

“Take a deep breath … collect yourself, focus yourself,” he said. “Whether this reflection is in 30 seconds or 30 minutes or 30 days, don’t rush headlong into any situation.”

After echoing Anarumo’s Commencement message to continually learn and evolve, MG Stitt returned to his teamwork theme. The commissionees’ promise to defend the U.S. Constitution against all enemies, foreign and domestic, he said, reflected American ideals of equality — that the nation rises and falls on Americans’ collective merits.

“Hold onto those words (of your oath),” MG Stitt said. “Let them be your touchstone, your litmus. They will guide you today, and henceforth in any chapter in your life.”