Up the field, past the defender, through the legs ... nothing but net 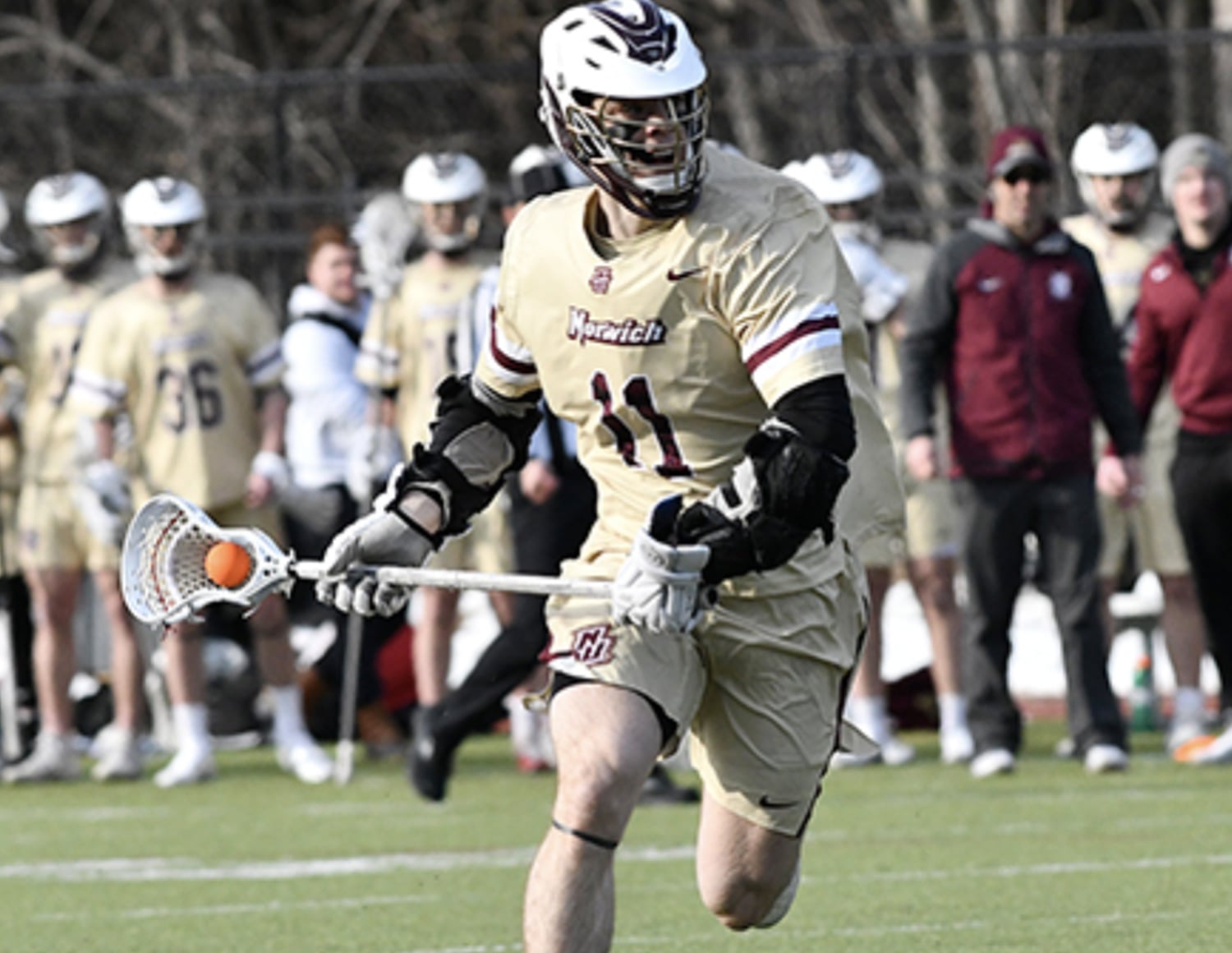 Yes, basketball and lacrosse are different. But on April 9, when Jones, a junior men’s lacrosse midfielder, charged goalward, inverted his stick and shot one-handed through his legs against Johnson & Wales, the result was unusual and effective.

The ball whizzed past the surprised goalie, who had dropped to his knees, and into the net. ESPN liked it enough to rank it No. 3  on its SportsCenter Top 10 highlights, Norwich’s second such feat for the 2021-22 academic year, fourth overall, and first for a spring sport.

“When I released (the shot), I thought it was going bottom right, but I kind of lost it for a second or two … But once I had turned and taken a second look, I saw the official’s arms go up (to signal a goal).” Callum Jones, Norwich University men’s lacrosse player

ESPN’s clip drew an electronic halo around Jones to highlight him and SportsCenter anchor Stan Verrett called the goal “crafty.”

With 35 goals, Jones ranks as the Cadets’ second-leading goal scorer this season (add in 26 assists and he’s got 61 points, also second on the team). He came up big in Friday’s Great Northeast Athletic Conference quarterfinal, scoring three goals, including the game-winner with 4:57 left to play against St. Joseph’s (Maine).

Jones said the SportsCenter goal developed when fellow Cadets midfielder Jack Anzalone, who was left of the St. Joseph’s goal cage, adjacent to the goal line, spotted him running up midfield. Jones said his defender was focused on the ball and left him room to find shooting space.

“I got pretty open and Jack threw me a really phenomenal pass, right in my stick.” Jones, a Burlington, Ontario resident and criminal justice major, said during a recent practice on Sabine Field at Haynes Family Stadium. “When I released (the shot), I thought it was going bottom right, but I kind of lost it for a second or two … I thought the goalie kind of caught it. But once I had turned and taken a second look, I saw the official’s arms go up (to signal a goal).”

Jones said he’s learned tricks from indoor box lacrosse teammates back home in Canada, who change their shooting angles to adapt to the more confined indoor game. Jones added that he has fun thinking of ways to shoot and frequently shoots between his legs in practice, partly because as a right-hander, he finds it easier to shoot one-handed and right-handed than to shoot two-handed and left-handed.

“I don’t have cable (television) here, so I don’t get to watch a lot of SportsCenter,” Jones said. “But my dad texted me right away. And said, ‘Did you see the highlight on ESPN this morning?’”

“I was not surprised he attempted it in a game, but I also know that he is one of the few that would be brave enough to try it,” Anderson wrote in an email. “Callum is a creative decision-maker. He is one of the most dynamic players in our league, and other teams have difficulty defending him. He has opened up many scoring opportunities for his teammates because of the attention he garners from our opponents’ defense.”

The Cadets, who have a 16-1 record and have won 13 consecutive games, will continue their conference championship pursuit Wednesday night meeting Johnson & Wales again at 4 p.m. on Sabine Field. Anderson said the SportsCenter goal was a byproduct of excellent teamwork. (Tune in here.)

“Great plays happen when we trust our team-based systems and play with confidence,” he wrote.