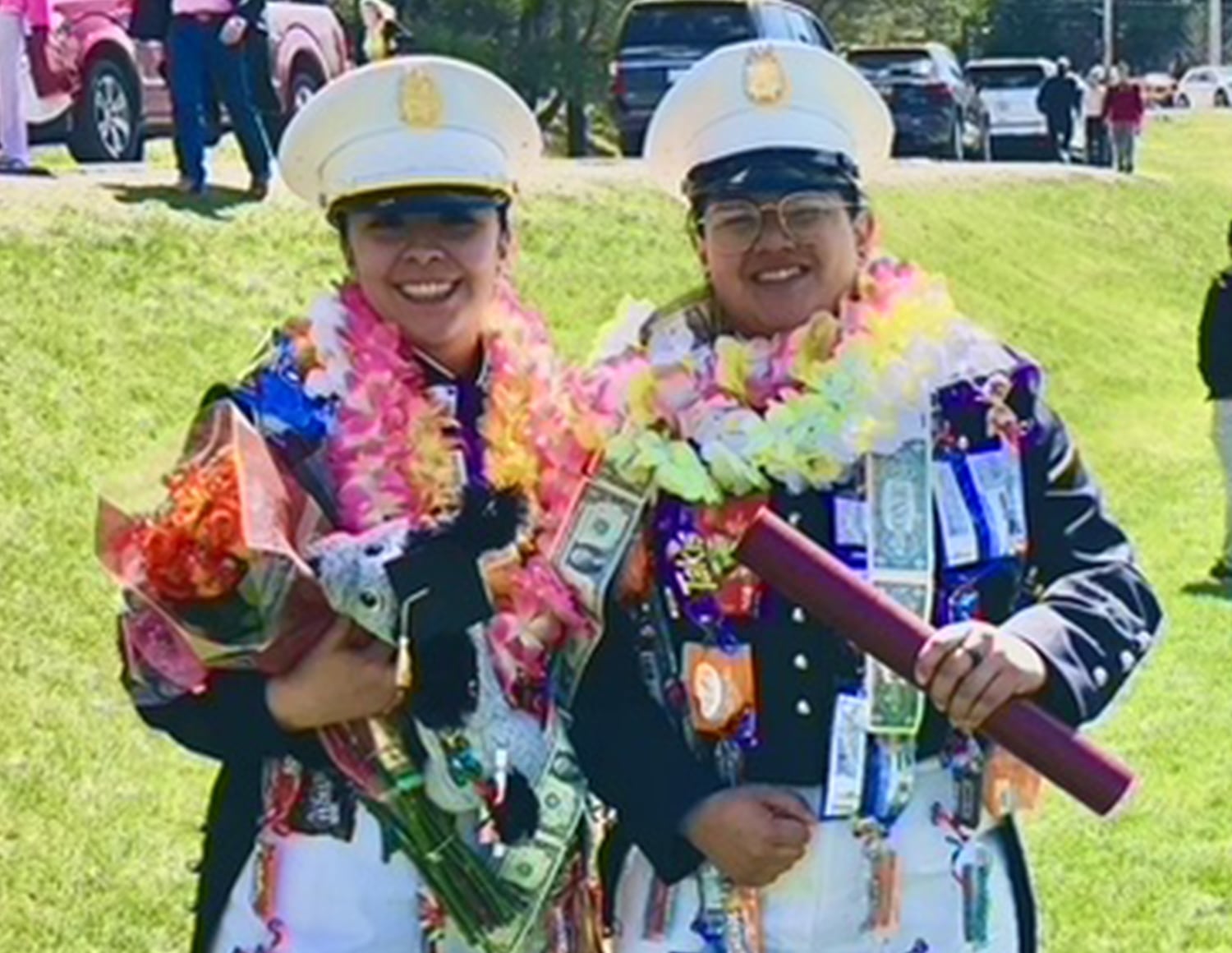 Anita DiMento and Jacqueline Federico wore their Commencement joy not on their sleeves, but around their necks.Neon-colored leis interwove with strings of dollar bills (for apartment rent, they joked) and necklaces of snacks — M&M’s, Skittles, fun size Snickers bars, several varieties of Doritos. DiMento somehow also had an asparagus bundle in her skein. (Someone had to eat healthy, right?)

The women’s rugby teammates, both Corps of Cadets members and criminal justice majors, had joined 529 other members of Norwich University’s Class of 2022 in Shapiro Field House on Saturday for Commencement.

Cellphone cameras had flashed and students from the Classes of 2022, 2021 and 2020 had hugged their kin and walked the stage. Two-thirds of the way through diploma deliveries, a confetti cannon had crackled, surprising the audience and spraying rainbow-colored shreds.

“I’m finally a real adult and I can finally go out there and do something with my life.” Francisco Colon, 2022 Norwich University graduate

Then, to close the ceremony, President Mark Anarumo cued the cannon and invited students to toss their caps and mortarboards skyward.

DiMento, a Carbondale, Colorado, resident who would that afternoon commission into the U.S. Navy, and Federico, a Humble, Texas, resident who wasn’t pursuing a commission, were standing in Shapiro Field House’s parking lot, watching classmates wander by, pose for more pictures and enjoy the revelry.

“All of our Polynesian friends put it together for us,” DiMento, who’d majored in criminal justice, said of her neckwear. “We’ve just been really fortunate to be a part of that.”

Federico said Norwich University had answered her prayers. After high school, she was feeling low; her parents were divorcing and college seemed unaffordable. But Norwich and Naval ROTC had delivered with scholarships.

Federico said she knew she’d made important friendships. They shined through particularly last fall, she said, after a harrowing rugby loss.

“We played the most terrible game of our lives,” she said, “But I just looked side to side and saw the people who love me most off the field and on the field.”

Francisco Colon, a criminal justice major from Roslindale, Massachusetts, said he was happy to have played college football (as a lineman) and to have graduated at last.

“I’m finally a real adult and I can finally go out there and do something with my life,” he said, crediting his parents, girlfriend and loved one for helping him finish. “The last week was relaxed. I was finished with finals, I knew I was going to graduate and I’ve been enjoying the time I had with who whoever I had here.”

“I came here my junior year of high school, and I just fell in love,” Briggs said. “I could not be happier that I chose this school, and the opportunities this university has given me have been unmatched.”

Briggs said his time in the Corps, especially rookdom, shaped his four years, reminding him that he’d never be alone and showing him the power of teamwork.

“Everyone really just tries to push one another to constantly keep going and doing their best,” he said. “The amount of positivity that radiates through this campus kind of just makes it amazing.”

Briggs said it was also amazing to have his diploma.

“Honestly, I couldn’t stop smiling,” he said of the moment he received his maroon tube. “I’ve never been more happy in my life.”

Faith Privett, a political science major and civilian student from Proctor, Minnesota, had spent the fall studying at CityLab:Berlin in Germany and graduated in December. She’d returned to campus to graduate with friends.

Privett, who represented Norwich at 2021’s Posters on the Hill with a research project of Supreme Court justices’ voting records, said she was thrilled, if slightly lost for words.

“It’s relieving and exhilarating and … I don’t really know,” said Privett, who’s lined up a job with the Minnesota Democratic Farmer-Labor Party. “It’s just like, ‘We did it,’ you know?”

Meanwhile, Federico had Commissioning to prepare for and dinner was hours off. But she and DiMento wouldn’t be hungry; they could always eat their necklaces.

“I will try,” DiMento said, in true Norwich fashion.